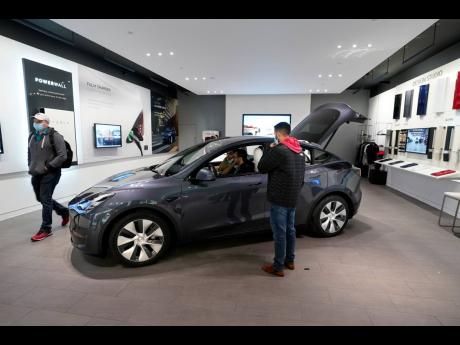 AP
A Tesla Model Y Long Range is displayed at the Tesla Gallery on February 24, 2021, in Troy, Michigan. 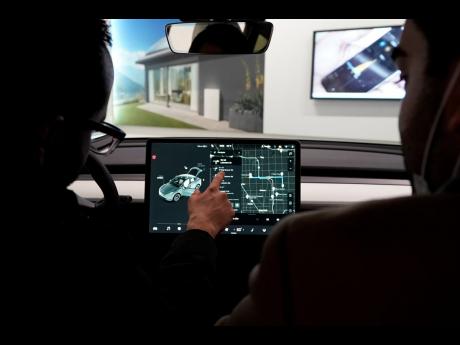 AP
Customers look over a Tesla Model Y Long-range on display at the Tesla Gallery on February 24, 2021, in Troy, Michigan. 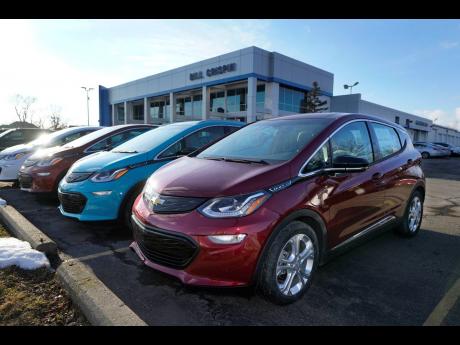 The world’s major automakers have made something abundantly clear: They believe electric vehicles, or EVs, will dominate their industry in the years ahead.

Yet for that to happen, they’ll need to sell the idea to auto buyers.

When Steve Bock recently replaced his family’s 2013 Honda Pilot SUV, he considered – and then dismissed – the idea of buying an electric vehicle. An EV with enough room to carry his two dogs would cost too much, he decided. And he’d worry about driving long distances with too few charging stations.

“I would consider it if the prices would come down,” Bock said, though leaving open the possibility of buying an electric vehicle next time.

Instead, the Raleigh, North Carolina resident settled on a Subaru Outback, which runs on gasolene.

Opinion polls show that a substantial majority of Americans are aligned with Bock. An EV might be on their shopping list if it cost less, if more charging stations existed and if a wider variety of models were available. In other words, the time isn’t right.

It adds up to a significant risk for the largest automakers. With governments across the globe intensifying efforts to reverse climate change, the automakers are staking their futures on the notion that consumers will soon be ready to buy vehicles that run not on the internal combustion engines that have powered cars and trucks for more than a century but on electricity stored in a battery pack.

General Motors, Ford and Volkswagen plan to spend a combined US$77 billion developing global electric vehicles over the next five years, with models from pickup trucks to small SUVs. GM has gone so far as to announce a goal of ending gasolene and diesel-fuelled passenger vehicles entirely by 2035 – and to become carbon-neutral by 2040.

For the automakers, the risk is as hazardous as it is simple: What if American consumers reject electric vehicles for many years to come?

Companies would have no choice but to discount them and hope, in the meantime, that their profits from gas vehicles would still cover their costs – at least until large proportions of buyers gravitated towards EVs.

If they don’t, the financial blow could be heavy. For now, EVs make up less than two per cent of new-vehicle sales in the United States and about three per cent worldwide.

“It’s still a sector that doesn’t have a mass appeal to the entire population,” said Jeff Schuster, president of global vehicle forecasting for LMC Automotive, a consulting firm. “It could be a financial drain if consumers do not buy at the same level.”

Yet in contrast to the United States, sales of EVs have taken off in Europe and China, largely because of much more far-reaching pollution regulations and government incentives. Those tighter environmental regulations are forcing the industry to sell more electric vehicles.

In Europe, carmakers unveiled a slew of new electric models ahead of lower EU limits on average emissions of carbon dioxide, the primary greenhouse gas blamed for climate change, that took full effect at the start of this year. Government-backed incentives can cut the cost to near that of an internal combustion vehicle.

The result: Nearly 730,000 battery vehicles were sold in Europe in 2020 – more than 300,000 of them in the final three months of the year. The market share of electric vehicles – battery-only and plug-in hybrids – jumped from 3 per cent to 10.5 per cent. By December, their share had reached nearly one in four.

Among the new owners is Kerstin Griese of Essen, Germany, who bought a battery-powered Peugeot 208 after having driven electric cars in the motor pool at work. Griese found that they supplied the acceleration necessary to merge safely on to the highway for her 40-kilometre (25-mile) commute to the public works department in the town of Solingen.

After a government subsidy of €6,000 and the carmaker’s €3,000 share, her new car will cost around €24,000 (US$29,000). The car can use fast-charging stations along highways, where she can recharge in a half hour when she takes longer trips, such as shopping excursions to the neighbouring Netherlands, about 65 kilometres (40 miles) away.

“I found that very appealing,” she said.

In China, which accounts for about 40 per cent of global EV sales, purchases have accelerated because of limits on the number of internal combustion cars that can be registered in six major cities, said Arndt Ellinghorst, an analyst at the research firm Sanford C. Bernstein.

Automakers, including start-ups Lucid, Bollinger, Rivian and Workhorse, plan to introduce 22 new EV models in the United States this year after having rolled out six last year, according to LMC.

Tighter regulations – and, perhaps with it, higher sales of EVs – might be coming to the United States, too, if the Biden administration succeeds in its promotion of electric vehicles as part of a broad plan to fight climate change.

Still, it could prove an uphill battle. Only 260,000 fully electric vehicles were sold last year in the United States. That’s out of a total new-vehicle market of 14.6 million. In fact, Americans are still spurning cars, in general, in favour of less-fuel-efficient trucks and SUVs.

Two polls late last year offered a glimpse of Americans’ appetite for electric vehicles. One, by Consumer Reports, showed that only 4 per cent of adults with a driver’s licence planned to acquire an EV the next time they buy a vehicle. An additional 27 per cent said they would consider one. About 40 per cent express some interest – but not for their next purchase. About 29 per cent don’t want an EV at all.

Likewise, when J.D. Power surveyed people who intend to buy or lease a new vehicle in the next 18 months, only about 20 per cent said they were likely to buy an EV. Roughly 21 per cent were unlikely. The rest were undecided.

“For every new-vehicle shopper seriously considering (battery electric vehicles), there’s another at the opposite end of the spectrum,” said Stewart Stropp, senior director of automotive retail at J.D. Power.

For one thing, Stropp said, most buyers are unfamiliar with electric vehicles and haven’t ridden in one. Those who have, though, are roughly three times as likely to consider them, he said. People want as many chargers as gas stations, Stropp said, but don’t seem to realise that most charging can be done at home.

The task of breaking down the American public’s hesitance to invest in a fully electric vehicle could prove problematic. And the automakers clearly recognise it. Last year, General Motors planned a major public campaign featuring test drives and engineers to answer customer questions at events around the country. The viral pandemic, though, forced it to scrap the plan.

GM is making experts available virtually this summer as it starts selling a Chevrolet Bolt small electric SUV for just under US$34,000, its first electric entry into the most popular segment of the US market. But Tony Johnson, marketing director for Chevy electric vehicles, acknowledges that there’s no substitute for “putting seats in seats”.

Johnson notes optimistically that surveys done for GM show that the number of people who would consider an EV is far higher than it was five years ago. GM is keeping the price of the revamped Bolt hatchback to under US$32,000, he said, and is offering free home charging stations.

Schuster foresees US sales rising this year to 359,000, taking off in 2022 and reaching over 1 million the next year. By 2030, LMC predicts US sales of over four million EVs. Yet even that would represent only one-quarter of the overall market.

Still, encouraging signs emerged in February, when EV sales rose 55 per cent from a year ago to 18,969, according to Edmunds.com. Helping boost sales, Schuster said, was the variety of models, plus added incentives and the expectation of stricter pollution limits from the Biden administration. Biden favours expanding a tax credit for buying EVs and has pledged to help build 500,000 more charging stations and increase fuel economy requirements.

Currently, a US$7,500 federal tax credit is phased out after an automaker hits 200,000 EV sales. GM and Tesla have both exceeded that level, and Nissan is close. A bill from Democrats would raise the cap to 600,000. Such a move would clearly help Tesla, the world leader in EV sales, which is facing increased competition as other automakers try to catch up.

The market will tip towards EVs, Schuster predicts, when all these forces line up.

“There are more choices, competitive pressure,” he said. “A new generation of technology will drive prices down. We’re getting there.”