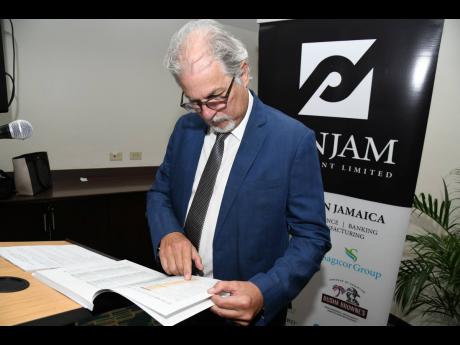 P roperty income for PanJam Investment Limited has held steady over the pandemic period, but a $2.7-billion downturn in investment income from financial holdings eroded more than half of the conglomerate’s revenue in 2020 to $2 billion.

Revenue would have been lower had it not been for a one-off gain of $326.18 million from the disposal of a property previously held for development at Bamboo Avenue in Kingston. The property was sold to investment outfit First Rock for about US$5 million through PanJam subsidiary Desnoes Estates Limited.

PanJam, which has holdings in the tourism market but also has indirect exposure through associate companies, said its yearly performance was impacted by declines in travel and hospitality, as well as smaller returns from one of its most lucrative holdings, a minority stake in Sagicor Group Jamaica.

“While there is still no clear end in sight for the pandemic, we believe that our current challenges are temporary, and that successful vaccination programmes, both domestically and in our major tourist markets, will have profound effects on confidence and tourism,” the company said in a statement to shareholders issued by Chairman and CEO Stephen Facey and Deputy CEO Paul Hanworth.

PanJam’s annual profit was slashed by more than half, from $8.3 billion, or $7.85 per share, to a five-year low of $3.5 billion, or $3.31 per share. The profit gap with 2019 narrows once the one-off gain of $1.6 billion that flowed mainly from the disposal of a small portion of Sagicor shares is eliminated.

Some of the decline in PanJam’s profit resulted from a billion-dollar diminution of its share of earnings from the associated companies in which it is invested, mainly Sagicor. As a block, the associates contributed $3.87 billion to the group, down from $4.95 billion the previous year.

PanJam’s cash inflows were otherwise impacted by the recommendation from the Bank of Jamaica to all financial holding companies not to pay dividends to shareholders owning more than 1.0 per cent of ordinary shares during the expected worst period of the pandemic.

The hold on dividends was expected to last a year, but was later extended to June.

Sagicor Group, which was among the holding companies covered by the pact, has been issuing promissory notes to impacted shareholders.

“Our share of Sagicor’s 2020 dividends has been converted into short-term, interest-bearing promissory notes. Our strategy ensures that there is balance in times of crisis,” PanJam said.

The Sagicor dividends are earning interest at a rate of 5 per cent per annum until payout. At the end of December, the dividends owed to PanJam amounted to $998.7 million.

The property and investment conglomerate’s own distributions to its shareholders was down to around half their usual levels in 2020, at nearly $670 million, also a five-year low.

The performance of PanJam’s key associate investments was mixed. The profitability of Sagicor Group Jamaica dipped due to its tourism holdings, but its core insurance business lines exceeded their performance in 2019. Also, PanJam’s share of profit from New Castle, which holds the Walkerswood spice brand, increased by 34 per cent.

“Our associated companies saw varying levels of impact from the pandemic. International travel was significantly curtailed after March 2020, which had a corresponding impact on our tourism-related investments, such as Chukka Caribbean Adventures and the Courtyard by Marriott Kingston,” the company said.

PanJam added that the performance of New Castle and business process outsourcing company Outsourcing Management, which trades as itelbpo, exceeded expectations, both having increased profits amid the pandemic last year. The conglomerate holds 15 per cent of itelbop.

Despite the pandemic-induced challenges in 2020, PanJam has grown in value, with its capital expanding from $43 billion to $47 billion, while its book value per share improved from $40 to $44. Total assets climbed from $54 billion to $62 billion.

The company said it is well positioned to weather the health crisis, having “spent decades building a robust balance sheet” that it says is capable of withstanding difficult periods.

The ‘travel and tourism’ sector is projected to have declined by 70 per cent since the coronavirus was detected in Jamaica one year ago. The overall economy is expected to contract by more than 10 per cent over the same period. But Jamaica is also expected to begin recovering this year, with likely growth projected at 3-8 per cent.