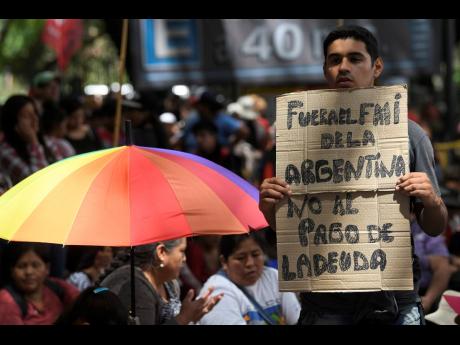 AP
In this February 12, 2020 photo, Argentinians protest the visit of an International Monetary Fund delegation. 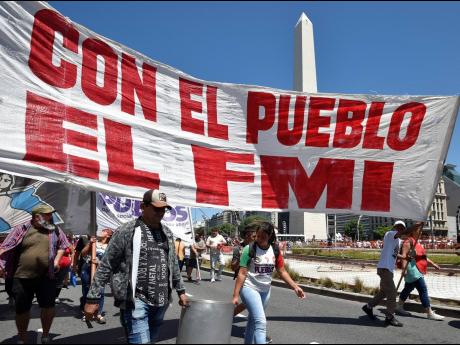 AP
In this February 12, 2020 photo, members of political parties and social movements protest the visit of an International Monetary Fund delegation in Buenos Aires, Argentina.
1
2

Like all countries, Argentina has a lexicon of colloquialisms that are not used in the rest of the Spanish-speaking world. One of the most emblematic is ‘el gil’ – pronounced ‘el heel’.

Whatever the form, it is something that no Argentine wants to be. This is where economics kicks in. Given that no one wants to be the gil, and it is also a country which has a pretty lofty sense of self-esteem, then no one is going to allow a fast one to be pulled on them.

What are such examples? How about paying taxes? Given the high level of corruption, Argentines feel that only a gil would pay taxes. They are not exactly wrong. You only need to recall the sacks full of dollars pilfered from the government that were filmed being hoisted over a convent wall a few years ago. How about believing in the currency?

Argentines feel that only a gil would keep their savings in Argentine pesos. They are also not exactly wrong, given the unending devaluation of the currency.

What about foreign debt? Many Argentine politicians feel that only a gil would pay off money owed to greedy creditors who were stupid enough to lend to them. The madcap antics of the vulture funds that seized Argentine assets and mindlessly battled in New York courts only deepened such perceptions.

However, who is the fool, really?

Soybean prices are soaring. Not only is it due to inflationary fears, with investors moving into commodities and other hard assets as a store of value, soybean prices are spiking due to high demand from China as it tries to rebuild its hog herd.

In 2018, China was hit with African swine fever, or ASF, which led to the death or culling of more than 20 million pigs. China has an insatiable demand for pork, and it is a staple of the Chinese diet. Now, it is trying to rebuild its herd.

Soybeans are a very efficient food to fatten pigs. Hence, the Chinese authorities are driving up soybean prices as they corner the market. This is a great moment for soybean producers around the world. Brazil, Uruguay and Paraguay are witnessing bumper crops, and boosting their economies. Argentina is also getting a lift.

The fiscal performance in 2020 was better than expected, while international reserves are finally inching up. The coupons on the restructured bonds will step up this year, providing an attractive current yield for the instruments. Yet, Argentine asset prices continue to drop like a stone. This is the moment when there should be a massive bid for Argentine paper.

Argentina brims with natural resources. It has some of the most abundant sources of fresh water in the world, thanks to the Andes Mountains and the Parana River. This allows its soil to be fertile, with one of the most productive agricultural sectors on the planet.

Its territory is half the size of the continental United States, with only 12 per cent of its population. That means that Argentina has an inordinate abundance of agricultural products that can be easily exported to the four corners of the Earth. Yet, no one cares. Investors seem to be tired of the country’s drama.

Meanwhile, foreign direct investment, FDI, is surging into agro-producers, such as Brazil and Paraguay, and people sit with baited breath to see what happens with the land reforms in Ukraine, another major grain producer. FDI plunged by half in Argentina last year. This is not surprising.

Smaller countries around the world make herculean efforts to service their debt. Some countries, such as Suriname, fret about the consequences they will suffer if they are too harsh in their debt restructuring. Yet, Argentina is a country that has already undergone nine debt restructurings, with more than half of them during the last 40 years. Now, with US$44 billion owed to the International Monetary Fund, the political class is calling for a default on the multilateral debt.

The case is different in the private sector and in some of the provinces. Most Argentine corporates and many provincial governors move heaven and earth to make good on their obligations. They know that they have a moral obligation to honour their promises. They also believe that good behaviour will lead to future access to the international capital markets.

However, the Argentine political class has convinced themselves that the market has no memory, and that greedy investors will soon be knocking on their door. Unfortunately, that is not the case. In their desperation not to be the gil, guess who ended up being the gil?