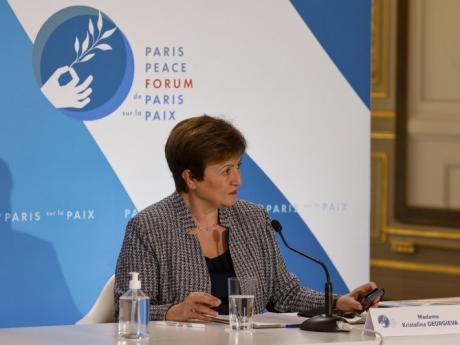 In this November 12, 2020 file photo, International Monetary Fund Managing Director Kristalina Georgieva attends the Paris Peace Forum at The Elysee Palace in Paris. Georgieva said Tuesday, March 30, 2021, that when the IMF releases its updated economic forecast next week, it will show the global economy growing at a faster pace than the 5.5% gain it projected at the start of the year. (Ludovic Marin, Pool via AP)

But she warns that uneven progress in fighting the pandemic could jeopardise the economic gains.

IMF Managing Director Kristalina Georgieva said Tuesday that when the IMF releases its updated economic forecast next week, it will show the global economy growing at a faster pace than the 5.5% gain it projected at the start of the year.

In remarks hosted by the Council on Foreign Relations, she said that the $1.9 trillion support package that President Joe Biden signed into law on March 11 along with rising confidence from increased vaccinations in many advanced economies were primary reasons for the forecast upgrade.

Georgieva said that governments around the globe had taken extraordinary actions over the past year including providing a combined $16 trillion in support and a massive injection of liquidity into the financial sector by the world’s central banks.

Without this prompt response, Georgieva said the last year’s downturn would have been three times worse.

But she said economic prospects are “diverging dangerously” with the global economy now in a multi-speed recovery increasingly powered by two engines — the United States and China, the world’s two biggest economies, while other countries fall behind.

Private economists are forecasting that the US economy could grow by 6% to 7% this year, which would be the best performance since 1984.

But Georgieva said strong growth in the United States could trigger a rapid rise in interest which could trigger significant capital outflows from emerging markets and developing economies.

She said that emerging markets and low-income countries already have limited firepower to fight the crisis and are highly exposed to the declines in tourism and other sectors hit hard by the pandemic.

She said how to best address the pandemic would be the key agenda item when the IMF and its sister organization hold their virtual spring meetings next week.

Those discussions will also include a meeting of the finance ministers of the Group of 20 major industrial countries.

She said that the IMF estimates that faster progress in ending the health crisis could add almost $9 trillion to global GDP by 2025.

“Given diverging recoveries, it is prudent to keep a close eye on financial risk, including stretched asset valuations,” she said.

“And major central banks have to carefully communicate their policy plans to prevent excess financial volatility at home and abroad.”