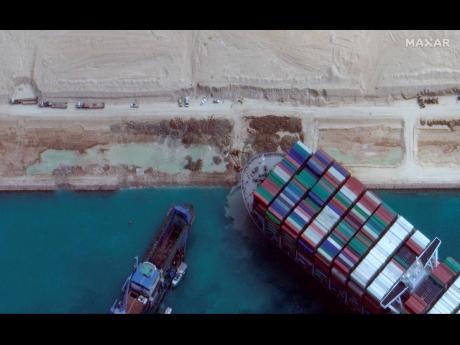 AP
This satellite image from Maxar Technologies shows excavation work on Sunday, March 28, 2021, in an attempt to free cargo ship ‘MV Ever Given’ that is stuck in the Suez Canal in Egypt.

Delays in freeing a mammoth container ship stuck in Egypt’s Suez Canal have highlighted still more pressure points in global trade, a year after supply chains were disrupted by the pandemic.

Tugboats and salvage crews took advantage of high tides early Monday to partially refloat the MV Ever Given, which carries cargo between Asia and Europe. It was unclear how long it would take to fully reopen the canal after moving the ship, which has been lodged in a single-lane stretch of the canal for nearly a week, blocking traffic through the critical trade gateway.

Earlier, it was feared the Panama-flagged, Japanese-owned ship might be stuck for weeks.

Economists say the Ever Given’s disruption of shipping through the Suez Canal probably won’t have an impact on global trade for more than a few weeks, and is unlikely to derail global growth this year as more people get COVID-19 vaccines and economies reopen.

But it’s another wake-up call for companies that have set up their business to rely on supply chains with little room for error, said William Lee, chief economist at the Milken Institute.

“This is a warning about how vulnerable our supply chains are and how the just-in-time inventory techniques that have been so popular have to be rethought,” he said.

“The shortages and the supply chain shortages that cause assembly lines to shut down – that will have a greater impact,” Lee added.

Ships are already having to detour around the Cape of Good Hope in South Africa to avoid the canal. That slows the arrival of containers at their destinations and when they can be emptied and then refilled with other goods bound somewhere else. That can drive up costs – price increases that eventually reach consumers.

“Shipping prices are going to go up,” said Gary Hufbauer, non-resident senior fellow at the Peterson Institute for International Economics. “That will tighten up supply lines and mean shortages at the consumer level, and it will also mean somewhat higher prices for oil.”

The incident has worsened shortages of shipping containers in Asia, which means retailers may be late getting TVs, furniture, clothes, auto parts and many other goods that are shipped via containers.

About 12 per cent of global trade by volume goes through the Suez Canal, but it accounts for 30 per cent of the world’s daily shipping container freight. That makes it the most important conduit for trade between Europe and Asia. Some 19,000 vessels passed through the canal last year, according to official figures.

The closure also affects oil and gas shipments. Nearly 10 per cent of oil shipments and 8 per cent of global liquid natural gas moves through the Suez Canal, according to the US Energy Information Administration.

Much of the traffic involves transpiration of crude oil from the Middle East to Europe and the United States. It’s also become an important link for Russian oil to Asia.

“The cost of shipping goods from Asia to Europe hit a record high in recent months and global freight rates are already near three times the level of a year ago,” she said.

At the same time, oil prices may be kept in check by worries that demand for oil will weaken amid renewed pandemic lockdowns in Europe. Benchmark US crude oil for May delivery fell US$1.03 to US$59.91 per barrel on Monday after rising US$2.41 on Friday. Brent crude oil for May delivery lost a dollar to US$63.43 per barrel after gaining US$2.62 on Friday.

North and Latin America are likely to be less affected than Europe by the blockage in the Suez Canal, because much of the shipping container traffic that runs between the Americas and Asia moves through the Pacific to hubs like the Ports of Los Angeles and Long Beach, or crosses through the Panama Canal.

“The impact on the US will be less than on Europe,” Hufbauer said.