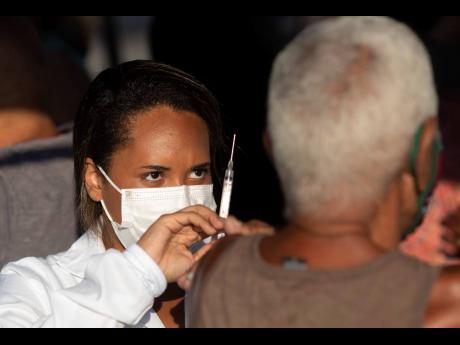 AP
A healthcare worker prepares to inject a man with a dose of the Sinovac vaccine at a COVID-19 vaccination point for seniors in Duque de Caxias, Brazil, on March 24. 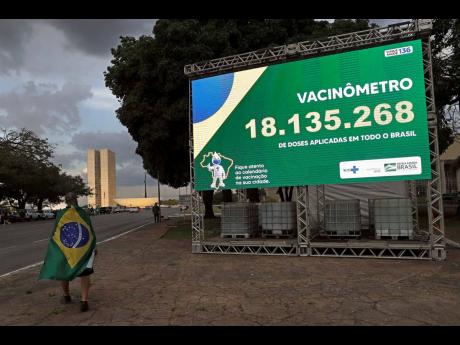 AP
A Brazilian wearing the national flag walks by a billboard presenting the number of COVID-19 vaccines administered, in Brasilia, Brazil, on March 30.
1
2

Russia has been trying to get its coronavirus vaccine Sputnik V into Brazilian arms for months, and been repeatedly frustrated by legal, regulatory and possibly even diplomatic obstacles.

That began to change as the South American nation played catch-up in the global race to snap up shots. Receiving little help from the United States, which was struggling to get a handle on its own outbreak, Sputnik V seemed as good as any; Brazil’s federal government and a group of nine northeastern states signed two deals with Russia’s sovereign wealth fund, RDIF, for a total 47 million doses. The shot is moving towards regulatory approval.

The vaccine has now been purchased by at least nine Latin American nations, with Brazil its greatest uphill battle.

That growing adoption reflects Russia gaining a greater foothold in the region the US has traditionally viewed as within its sphere of influence – and where the American government had boasted of steering Brazil away from Russian vaccines. It’s similar to China’s success in achieving wide use of its own vaccines in Latin America.

That has caused consternation in US diplomatic circles, although it remains to be seen if Russia’s vaccine outreach will yield deeper partnerships.

Tom Shannon, a former undersecretary of state whose long diplomatic career included several stints in the region, told The Associated Press the US has largely missed an opportunity to engage with Latin American governments during the pandemic, with the exception of a recently announced plan by President Joe Biden’s administration to provide Mexico with surplus shots

“For the Kremlin, COVID was a godsend,” Shannon said of Russia’s vaccine outreach. “This was a chance for them to restart their diplomacy in the hemisphere with a whole new face of public health intervention, and they are taking full advantage of it.”

Russia’s presence in Latin America has been limited since the 1990s, and in recent years primarily entailed an alliance with Venezuela for the provision of arms and energy projects, as well as Nicaragua for arms and building emergency response capabilities. But Latin America’s arms purchases plunged as its commodities boom ended and Venezuela economy melted down.

Russian ties were also strong with the government of Argentina’s Cristina Fernandez de Kirchner from 2007 to 2015 and appear to be reviving. As current vice-president, Kirchner spearheaded negotiations to buy Sputnik V even when local scientists initially were sceptical of the early experimental data reported by the Gamaleya Institute that developed the vaccine.

Argentina’s embrace of the vaccine helped convince Mexico – which had struggled to get vaccines from US companies – to sign an agreement for 24 million doses, though they have been slow to arrive.

Bolivia’s previously tight relations with Russia had reversed under President Luis Arce’s right-wing predecessor, but Arce, who took office in November, agreed to buy millions of doses. After speaking with Putin by phone, he also announced reactivation of a Russian-led project to build a nuclear research and technology centre.

US vaccine outreach, meantime, has been almost entirely indirect, with a pledge of US$4 billion to the World Health Organization’s COVAX programme to provide shots to low- and middle-income countries. Recently, such shipments have been delayed.

The US has snatched up more doses than it will eventually need, and Biden has repeatedly said his focus is vaccinating all Americans before sharing vaccines abroad. The US has had almost three times as many COVID-19 deaths per capita as Russia and, even with one of the world’s fastest immunisation roll-outs, Americans have complained about the pace.

By contrast, Russia’s own vaccination programme has lagged because of widespread scepticism of the vaccine – a February poll showed only 30 per cent of Russians were willing to get the shot – and drug makers being slow to ramp up production.

Only recently did Biden’s administration agree to provide 2.7 million surplus AstraZeneca doses to Mexico. Brazil has been trying to negotiate the same for itself, according to its foreign ministry.

“Although I truly think that the US and European countries are the preferred partners in the region, if there is a vacuum, there isn’t the slightest doubt that China and Russia will seek a way to take advantage,” Mauricio Claver-Carone, the head of the Inter-American Development Bank, told the AP.

The US Department of Health and Human Services’ 2020 annual report said in a section titled ‘Combatting malign influences in the Americas’ that it had convinced Brazil to not to buy the Russian shot. Kremlin spokesman Dmitry Peskov said on March 16 that other countries faced similar coercion, without naming them.

“The pressure has been unprecedented, tough and devoid of any diplomatic niceties,” Peskov said. “We are categorically against politicising the situation with vaccines.”

Fabiano Mielniczuk, a professor who specialises in Russian international politics at Brazil’s Federal University of Rio Grande do Sul, said suspicion of Russia represents an outdated Cold War mentality, and sees its moves to introduce the shot “much more as market-oriented action than as geopolitical action”.

Despite the assertion in the “malign influences” section, it’s unclear what action the US took. The US embassy denied exerting any pressure regarding vaccines approved by Brazil’s health regulator, which has not yet signed off on Sputnik V. Brazil’s government denied even being consulted.

Frustrated by the speed and bureaucracy of health regulator Anvisa, the Russians conducted phase-three trials of its vaccine elsewhere, according to Bahia state’s Governor Rui Costa, who had worked closely with the fund. At the time, Brazil still required local phase-three trials for regulatory approval.

In a last-ditch effort, RDIF’s director Kirill Dmitriev reached out to former President Luiz Inácio Lula da Silva, according to Alexandre Padilha, a lawmaker and former health minister who joined their subsequent meeting. That led to the nine states’ eventual deal for 37 million doses. RDIF declined to comment for this story.

“The northeastern governments already have various investment partnerships with the Chinese,” Padilha said. “I think, without a doubt, this can open doors for northeast governors to establish other partnerships and technology investments with the Russians.”

Putin meantime heaped flattery on Bolsonaro at a multinational summit in November, saying the Brazilian had “expressed the best qualities of masculinity and determination” by putting citizens’ interests before his own health. Bolsonaro posted video of the praise to social media.

Even after Anvisa dropped its demand for local phase-three trials, the Brazilian lab that would produce Sputnik V locally – Uniao Quimica – struggled to clear hurdles.

RDIF’s Dmitriev told Brazilian magazine Veja in mid-March that he felt his vaccine was still facing political bias. But Anvisa said delays were technical, caused by lacking documentation, and on March 23 it held a five-hour meeting with Uniao Quimica and Gamaleya to iron out problems. A week later, Anvisa certified Uniao Quimica’s manufacturing practices.

On April 6, Bolsonaro spoke with Putin by video call and said afterwards that his government was working to resolve “some obstacles” to importing the shot. The leaders also discussed broader trade, defence industry cooperation and technology.

After the call was first reported, the former director of Brazil’s trade and investment promotion agency, Márcio Coimbra, said on Twitter, “Now distant from Washington, we may be closer than ever to Moscow.”

Some documentation is still missing, but Sputnik V is inching closer to approval in Brazil – and another soft-power score for Russia. It serves as a wake-up call, said Eric Farnsworth, who has developed and implemented US policy in the region.

“We’re not the only ones that Latin America can interact with and they’re showing it right now,” said Farnsworth, vice-president of the Council of the Americas, a New York-based organisation promoting business in the region. “There is much ground to be recaptured, and the only way to do that would be to overwhelm the region with generosity in combatting the pandemic.”