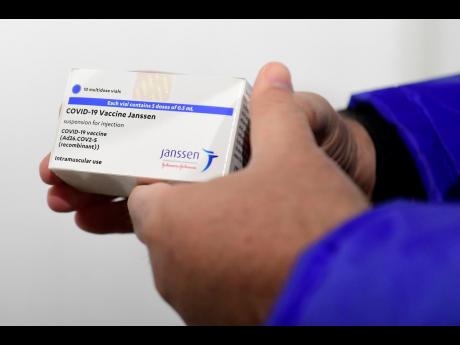 AP
A box of Johnson & Johnson COVID-19 vaccines is displayed.

The healthcare giant on Tuesday raised and narrowed its financial forecasts for 2021, pushing its shares up by more than two per cent in midday trading to around US$167.

The one weak spot was a small drop in consumer health sales, which saw a surge in 2020’s first quarter, when nervous consumers stocked up on over-the-counter medicines and hygiene products as the coronavirus pandemic set in and lockdowns began.

Johnson & Johnson last week paused administration of its COVID-19 vaccine, due to worries over roughly one in a million vaccine recipients developing unusual blood clots along with low blood levels. One of them died.

On Tuesday, the European Medicines Agency said its safety committee’s analysis found that risks of those clots and low platelets is very small but should be listed as a rare side effect of the vaccine. The committee declared the vaccine’s benefits outweigh risks of side effects.

J&J, the world’s biggest maker of healthcare products, last week delayed the planned start of its European vaccine roll-out over the issue. The company did not immediately say what impact the EMA news would have on that roll-out.

The maker of Tylenol and Acuvue contact lenses still awaits United States health officials’ ruling on the clotting issue, which could come Friday. The one-dose shot is seen as crucial for vaccinating people in remote areas and in poor countries with limited medical infrastructure.

The company, based in New Brunswick, New Jersey, reported revenue of US$22.32 billion, above the US$21.82 billion analysts had anticipated.

“Our first-quarter results give us even more confidence in our future,” after a year of uncertainty and lockdowns amid the pandemic, Chief Financial Officer Joe Wolk told analysts on a conference call to discuss the quarterly results.

Wolk noted the company plans this year to apply for 10 regulatory approvals of new medicines and additional uses for existing drugs.

In March, the company’s COVID-19 vaccine received emergency use authorisation from regulators in the United States, the European Union and elsewhere. After the clotting problem developed, J&J last week paused all vaccinations, including in ongoing tests of the vaccine.

In addition, quality lapses at one of the key manufacturers helping to make the vaccine forced Johnson & Johnson to discard roughly 15 million doses that didn’t meet quality standards and then to halt production at that factory, while the US Food and Drug Administration investigates.

J&J officials said it’s too soon to determine whether that will affect its commitments to provide 100 million doses in the US by June and a total of one billion doses globally this year.

During the quarter, sales of prescription drugs climbed 9.6 per cent, to US$12.2 billion, led by Stelara for psoriasis and other inflammatory disorders, schizophrenia medicine Invega Sustenna, and cancer drugs Darzalex and Imbruvica. J&J reported US$100 million in initial sales of its COVID-19 vaccine.

Edward Jones analyst Ashtyn Evans called the results solid, noting J&J’s prescription drugs business “continues to grow above the market, and the medical-device growth is strong as it recovers from the pandemic”, which has caused delays in elective surgeries.

CFRA analyst Sel Hardy raised his recommendation on J&J shares to ‘buy’ from ‘hold’ and boosted his 12-month stock target price to US$177.