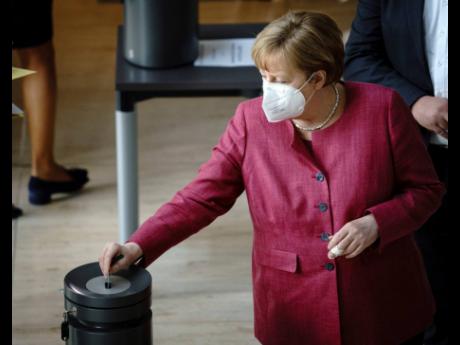 AP
Chancellor Angela Merkel puts her voting card in the ballot box during the Bundestag session in Berlin, Germany, on Wednesday, April 21, during the vote on the expanded Infection Protection Act to contain the coronavirus pandemic.

German lawmakers on Wednesday approved a proposal by Chancellor Angela Merkel’s government to mandate uniform restrictions in areas where the coronavirus is spreading too quickly, among them closures and a night-time curfew.

As parliament’s lower house debated the plan, thousands of protesters gathered on a nearby street. Police broke up the demonstration with pepper spray and made dozens of arrests after participants ignored coronavirus restrictions and tossed bottles at officers.

The legislation to apply an “emergency brake” consistently in areas with high infection rates is intended to end the patchwork of measures that has often characterised the pandemic response across highly decentralised Germany’s 16 states.

Lawmakers in the lower house voted 342-250 for the plan, with 64 abstentions. The upper house, where state governments are represented, is due to consider the legislation on Thursday. It would apply until the end of June.

“As hard as it is, as sick of it as we are, reducing contacts helps,” Health Minister Jens Spahn told lawmakers.

“We are again seeing 5,000 COVID-19 intensive care patients and rising, with the age of the patients sinking,” Spahn said. “We want to avoid an overburdening of our health system, an overburdening that many of our neighbouring countries have experienced painfully.”

Spahn emphasised the need to “break this wave” of infections to get through “this difficult, hopefully final part of the pandemic marathon”.

Not far from the parliament’s Reichstag building, an estimated 8,000 protesters assembled, few of them wearing masks. Police, who had deployed about 2,200 officers from various parts of Germany, ended the gathering after organisers failed to get participants to comply with coronavirus restrictions.

A group of demonstrators was prevented from climbing over barriers. Officers used pepper spray after bottles were thrown at them, the police said.

In all, there were 152 arrests by late afternoon for offences, including breaking coronavirus rules and assaulting officers, the police department said on Twitter.

“There are some people out there today on the streets of this city who say it isn’t serious and there’s almost nothing going on,” Vice-Chancellor Olaf Scholz said in parliament. “Yes, something is going on: 80,000 people in this country have died, and you can’t talk past or overlook that.

“Because that’s the case, and because the situation is still serious, something must be done beyond what we have done so far,” Scholz said. “And what we need now is clarity and consistency for what happens when the … infection rates rise too much.”

The proposal features plans to impose a 10 p.m. to 5 a.m. curfew, limit personal contacts, close leisure and sports facilities, and shut or restrict access to many stores.

The measures would kick in for areas where there are more than 100 weekly new cases per 100,000 residents. Schools would have to switch to distance learning at a higher rate of 165.

Germany’s nationwide rate stood at 160 new cases per 100,000 residents on Wednesday, though there were wide regional variations.

Opposition lawmakers advanced a variety of arguments against the bill. Alexander Gauland of the far-right Alternative for Germany, which opposes lockdown measures in general, called it an “attack on rights of freedom, federalism and common sense”.

The Greens had different objections. “This emergency brake remains too half-hearted, too ineffective, too inconsistent and too disproportionate,” lawmaker Maria Klein-Schmeink said. Her party abstained.