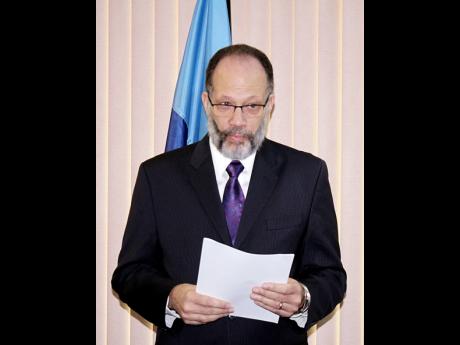 File
Caricom Secretary General Irwin LaRocque noted a sense of optimism from the high-level meeting with the US secretary of state.

Perhaps the most important aspect of the short statement issued in Washington after a first two-hour meeting last week between the new United States Secretary of State, Antony Blinken, and his Caricom counterparts was its emphasis on inclusion.

In contrast to the failure of the Trump administration to demonstrate any sense of partnership with the region and its preference for divisive transactional coalitions of nations willing to support its thinking about Venezuela, Mr Blinken made clear that Washington will now work with “all countries in the region” to strengthen cooperation and coordination.

Caricom Secretary General Irwin LaRocque best summed up the significance of the meeting. In his brief opening statement, he noted Caricom Foreign Ministers’ sense of optimism at “the resumption of interaction between Caricom as a region and the US at this high level”, observing that this had once been a regular feature of the relationship.

The meeting in the form of a virtual roundtable confirmed the overriding issues: management of the COVID-19 pandemic, vaccine supply, regional economic recovery, the need for access to concessional development financing based on vulnerability, cooperation on increasing climate resilience, migration, strengthening security, democratic values, and human rights. As such, it set the scene for a substantive future dialogue.

While time will tell how the relationship improves and where the future fault lines lie, the emphasis was on the positive and a commitment to advancing cooperation.

Venezuela and China will undoubtedly continue to figure prominently in bilateral discussions, but the emphasis in this first encounter was on the concerns of the region.

Mr Blinken’s agenda and tone contrasted markedly with the tenor of comments made last month by Admiral Craig Faller, the head of the US Southern Command. Speaking in the context of Latin America and the Caribbean, he told the Senate Armed Forces Committee that the US was intent on counteracting Chinese and Russian influence in the hemisphere.

When it comes to China, Admiral Faller, a Trump appointee, told the senators: “We can’t let them prevail here in our neighbourhood.”

Speaking about the Caribbean and Latin America, he suggested that China sought regional economic dominance and that its influence was quickly growing in the hemisphere. It is, he said “working on over forty port deals, dishing out significant loans for political and economic influence, pushing for IT infrastructure, and engaging in predatory practices like illegal, unregulated and unreported fishing”. He also criticised China for using vaccines in some countries to leverage deals for Huawei’s 5G telecommunications systems.

No one doubts that the Biden administration has such concerns about China’s influence in the Caribbean and the destabilising situation in Venezuela, but what is now needed is a more thoughtful exploration of why the Caribbean has turned to others for support.

US self-interest aside, common sense suggests that if the United States wants stability and security on its southern seaboard, it needs a policy that is holistic, integrated, and which address why the region has gladly accepted Chinese development assistance.

Many of the answers as to what should happen next are contained in a recent short paper - Reimagining the US Strategy in the Caribbean -published by the Centre for Strategic and International Studies (CSIS), a Washington-based think tank.

It proposes linking existing US initiatives into a single comprehensive long-term strategy towards the Caribbean. This would involve, CSIS suggests, a reimagined Caribbean Basin Initiative that includes services, the broadening of the US-Caribbean Security Initiative beyond its present focus on narcotics interdiction and transnational crime, and the expansion of the range of activities potentially available through the 2016 multiyear US-Caribbean Strategic Engagement Act.

Specifically, the paper suggests US investment in diversification to build resilience, support for sustainable projects in the Blue Economy to create new forms of employment, seeing the region as a target for energy investment and engagement in the context of climate change, and creating opportunities for both development and nearshoring.

As part of an integrated strategy, it also proposes that the US does more through education to develop knowledge-based economies, address the gaps in digital access, and by incentivising investment in infrastructure, meet US concerns about China’s role in the region. It also stresses the importance of involving the Caribbean’s large diaspora in US re-engagement.

What CSIS and others are recommending is a practical, integrated, hands-on approach that involves the private sector, the region, allies, and multilateral institutions in a concerted long-term response that judiciously mixes economic, security, and development strategy in support of growth, prosperity, and stability in the region.

This is not rocket science but requires a joined up whole-of-US-government response. It also needs Caribbean governments and strong non-governmental voices from the region and the diaspora with viable solutions, and a plan and reach to convince legislators, officials, and the US private sector that there can be mutual gain from a new approach.

A few days ago, Chinese President Xi Jinping told the annual Boao Forum for Asia that to create “a future of shared benefits”, the world requires “consultation on an equal footing”.

“We must not let the rules set by one or a few countries be imposed on others or allow unilateralism pursued by certain countries to set the pace for the whole world. What we need in today’s world is justice, not hegemony,” he said.

If the US is truly concerned about offsetting or balancing China’s multifaceted support and influence in the Caribbean, it must address the idea of shared benefits, reimagine the partnership, recognise the appeal of President Xi’s words, and in response, design well-resourced, integrated regional programmes in partnership with the region.

The pandemic may now threaten the region with a ‘hard to recover from’ economic long-form of COVID, but it also provides the opportunity for the new US administration to respond in a holistic way that shows that its relationship with the region really matters.

Mr Blinken’s demonstration of commitment and his stated willingness to engage with his US colleague Cabinet secretaries on the issues raised is welcome, but what is needed is a long-term integrated programme for the Caribbean that jointly addresses the issues discussed.