Tourist train in the works 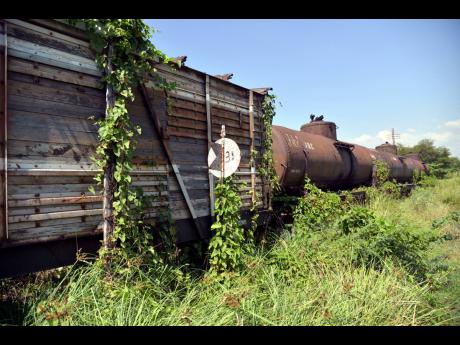 File
Old and rusted train cars owned by Jamaica Railway Corporation are overtaken by grass and weeds in this Gleaner photo taken in 2014. The Development Bank of Jamaica is making another try at ginning up investor interest in reviving the country’s rail service.

Jamaica is seeking investors to pump at least US$30 million ($4.5 billion) into developing and managing a tourist train that would link the beaches of the north coast with the sugar plantations inland. Phase one of the project entails developing a...

Jamaica is seeking investors to pump at least US$30 million ($4.5 billion) into developing and managing a tourist train that would link the beaches of the north coast with the sugar plantations inland.

Phase one of the project entails developing a rail service from Montpelier to Appleton Estate in St Elizabeth, which would link to the spirit company’s popular rum tour. Phase two, set for 2024, involves building a rail station at Catherine Hall, Montego Bay or in proximity to the resort city’s cruise ship terminal at Montego Freeport.

“Based on initial estimates, the total capital investment expected from the investor/consortium for the project may range between US$30 million and US$35 million,” said the Development Bank of Jamaica, DBJ, in documents requesting expressions of interest from prospective investors.

The development bank did not respond to direct requests for comment.

The tourist train targets cruise passengers visiting Jamaica, who currently spend US$102 per person on average.

To design its tourist train, DBJ studied five popular excursions that persons pay US$100 and upwards to experience, the most notable being the Napa Valley Wine Train journey in California, United States. Tourists pay US$234 per ticket traverse the vineyards via train.

The other four were Verde Canyon Railroad Adventure in Arizona, costing US$112 a ticket, to experience nature and the Sinagua Cliff dwellings; Panama Canal, Track and Tales Tour, for US$180, which offers a ride along the canal and forest tour; the three-hour White Pass Summit Excursion in Skagway, Alaska, which features historic sites for US$103; and the St Kitts Railway Scenic Excursion, featuring rural sites, and costs US$145 for the three-hour tour.

Jamaica’s project represents the latest effort to divest the Jamaica Railway Corporation, which functioned as a public transport operator up to the 1990s, but the first public attempt to privatise a section of the rail for tourism.

The DBJ has engaged Ernst & Young Services Limited as a consultant to the project.

“The public-private partnership consists of four stages, the project identification, business case, transaction, and contract management, with Cabinet approval at the end of each stage. The project is currently at the business case stage,” DBJ document stated.

“The commercial rail service would include, but is not limited to, tourist train between Montego Bay, St James, and Appleton Estate, St Elizabeth, and any other commercial activity connected therewith,” the DBJ said.

The Ministry of Transport and Mining, under which the defunct rail service falls, will function as the transaction managers to provide guidance and support to the Jamaica Railway Corporation Enterprise Team.

The winning bidder would enter a development lease with the Government of Jamaica, GOJ, through the Jamaica Railway Corporation, which will act as lessor and regulator.

Jamaica’s rail service started in the late 1800s as one of the oldest in the Western Hemisphere. During its years of service up to 1992, the haulage of bauxite mineral accounted for 80 per cent of the revenue, with commuter traffic accounting for the bulk of the remainder.

“This tour operated until 1992, when the Government took the decision to suspend islandwide commercial train services and commence efforts to privatise these services due to Jamaica Railway Corporation’s inability to generate adequate revenue,” the DBJ said.

The idea for a tourist train resurfaced eight years ago, first in consultation with the World Bank in 2013, and within the DBJ the following year.

“Both reports concluded that the GOJ should consider a concession for the Montego Bay to Appleton rail line for tourism opportunities as the project appears to be commercially viable on a stand-alone basis,” the DBJ noted.

The successful bidder will be required to rehabilitate and upgrade the rail and other infrastructure and equipment along the route, at their own expense. The Government will assist in expediting and facilitating the necessary approvals, but will not provide sovereign guarantees or any special incentives for the operator, the document stated.

“The main infrastructure assets along the corridor have significantly deteriorated since its closure in 1992 as a result of the lack of usage and vandalism,” DBJ added.

In a market questionnaire attached to the privatisation document, the development bank asked potential interested bidders to rank from 1 to 5 any concerns relating to the recovery of the tourism sector, squatters living along the rail line, and locations to start the service.

Successful bidders will be evaluated on their experience in tourism, along with rail operational experience and sound financial backing.

The Jamaica’s tourist train experience is expected to be a six-hour excursion “to facilitate strict logistical schedules of the cruise ship operators,” DBJ said.