Cedric Stephens | The mishandling of ODPEM 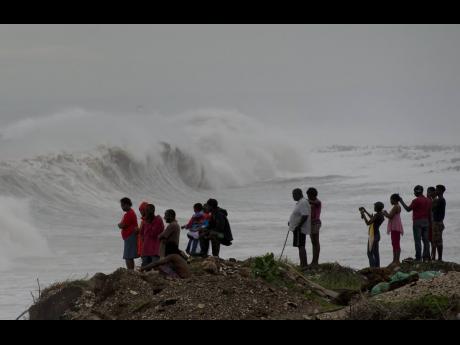 File
People in Kingston watch as a storm approaches in October 2016. It is the job of the ODPEM to ensure Jamaica is prepared for and able to cope with natural disasters.

The Office of Disaster Preparedness and Emergency Management, ODPEM, is Jamaica’s national disaster organisation. According to the information posted on its website, it is responsible for disaster management and “taking action to reduce the impact of disasters and emergencies on the Jamaican population and its economy” and “plays a coordinating role in the execution of emergency response and relief operations in major disaster events”.

Major disaster events listed included floods; the threats of hurricanes during the Atlantic Hurricane Season, June 1 to November 30, annually; earthquakes; man-made hazards such as chemical spills, sea, road, rail and air accidents, and environmental pollution, civil strife, riots and demonstrations and the like; and fires caused by acts of nature or by man. Forest fires and grass fires may be caused by lightning storms, drought, or human error, and the like.

Notably absent from the list were epidemics and pandemics.

Oddly, the legal basis for the Government’s COVID-19 actions are orders made under the provisions of the Disaster Risk Management Act, DRMA. The law also governs the operations of ODPEM. Section 4 of the DRMA describes the principal aims of ODPEM as follows:

a) Advance disaster preparedness and emergency-management measures … by facilitating and coordinating the development and implementation of integrated disaster management systems; and

b) Institute measures as may be necessary to mitigate disasters.

Section 5 of the DRMA lists 16 functions that ODPEM must undertake “to give effect to the objects specified in Section 4”. Sections 8 and 9 describe in detail the duties of the organisation’s administrative head, the director-general (D-G). The social and economic disruption in the society that COVID-19 has caused since last year – even though ODPEM appears to be operating in the background, if at all – highlights how important disaster management is in the society and the major role that the D-G is expected to play before and during disaster events.

The recent statement from the former ODPEM boss, Leslie Harrow, about his departure from that agency on April 30, one month before the start of the 2021 hurricane season and during a once-in-a-century pandemic, raised questions in the print media about the reasons for and timing of his resignation.

Suggestions about political interference in the carrying out of his duties were wrong, he said. His written response and his action to resign should, in the absence of additional information, be interpreted against the background of the functions that ODPEM is mandated by law to perform.

Mr Harrow was at pains to explain his “still cordial relationship with the Honourable Minister [Desmond McKenzie] and the Permanent Secretary [Marsha Henry Martin] and, indeed, other members of the ministry”.

Nothing was said about the country’s state of readiness for the imminent hurricane season, the complications that are likely this year given COVID-19, and the usual platitudes about wishing his successor and ODPEM ‘all the best for the future’. It was as if he, to use a biblical expression, was shaking the dust off his feet. That action is a symbolic indication that he had done all that he could have done for ODPEM and, therefore, carried no further responsibility for it, whatever happens.

This newspaper’s editorial on April 28, written seven days after Mr Harrow sent his ‘Letter of Appreciation’ to ODPEM Chairman Joy Douglas and two days before his secondment to the agency came to an end, said: “Jamaica will face significant logistical and public-health challenges should a weather event in the coming hurricane season force the Government to relocate people and place them into shelters (in a situation where) relatively few people will be inoculated against COVID-19.”

It also said that “severe weather events were increasingly likely because of global warming”. Omitted from that scenario was the case of Puerto Rico, which was struck by Hurricanes Irma and Maria two weeks apart in 2017.

The former ODPEM head was seconded from the Electoral Office of Jamaica on November 1, 2020, for six months, with an option to seek an extension at the end of that period, April 30, 2021. Who recruited him and agreed to those employment terms? Given the nature of the job, why was the period of notice only nine days? Did the agency have a succession plan in place? What were the factors that led to the hiring of an outsider instead of promoting an employee to fill the position Harrow was recruited to fill?

ODPEM is an agency of government. Therefore, it is required to comply with the 2012 Corporate Governance Framework for Public Bodies in Jamaica, which says: “Corporate governance is the system of rules, practices, and processes by which the agency is directed and controlled. Corporate governance essentially involves balancing the interests of its many stakeholders, such as employees, management, the community it serves (members of the public), suppliers, partners, and the Government.” The phrase encompasses practically every sphere of management, from action plans and internal controls to performance measurement and disclosure.

The circumstances surrounding the recent departure of ODPEM’s former director-general is a matter of public concern that requires in the context of the functions of the agency and government’s governance framework more and better particulars from ODPEM’s board and/or its parent ministry; and, further, the details of the actions being taken to fill the position with a person with the required skills and competencies, and/or the appointment of an interim head.

Four days after Hurricane Katrina devastated New Orleans, United States President George W. Bush uttered the eight words that have gone down among the most recognised of his presidency: “Brownie, you’re doing a heck of a job.” This statement was seen as endorsing the work of FEMA Director Michael Brown. FEMA is the US counterpart of ODPEM. President Bush ended up being blamed for the poor government response to that event. Prime Minister Andrew Holness and Local Government Minister Desmond McKenzie, be warned!

In ‘Insurance implications of climate change’, which I wrote about two weeks ago, I questioned the wisdom of placing ODPEM in the Ministry of Local Government. That ministry cannot supervise this agency. The way it has handled the Harrow affair and its continuing silence on the matter have shown that it does not have a clue about corporate governance or enterprise risk management. This is one of the many lessons that COVID-19 has taught.