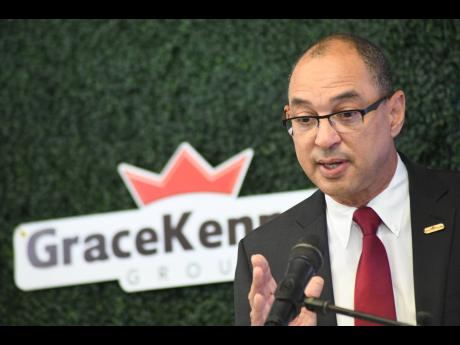 Various food and meat producers have announced price increases in recent weeks, but one of Jamaica’s largest manufacturers, Grace Foods, says it is exploring various means to minimise the pass-through of prices to consumers. Production costs have...

Various food and meat producers have announced price increases in recent weeks, but one of Jamaica’s largest manufacturers, Grace Foods, says it is exploring various means to minimise the pass-through of prices to consumers.

Production costs have been soaring, manufacturers say, as a result of supply chain challenges, including rising shipping costs from countries such as Asia, costlier raw materials, and fluctuations in the foreign exchange rate.

The price increases that Jamaicans could see on retail shelves moving into June may range between 10 and 30 per cent, a review of the public notices sent out on price adjustments indicates.

Grace Foods, a division of the GraceKennedy food and financial services conglomerate, has not yet tallied what level of increases it will levy on consumers, nor finalised when the increases will take effect.

“Freight rates are a big issue for us now, but it’s not only that. The price on raw materials for packaging like cardboard and cans have gone up significantly. Almost everything has gone up, we have seen significant increases in chicken paste as well, which are used for the production of our Vienna sausages,” said group CEO of GraceKennedy Limited, Don Wehby.

“We will have to pass on some of the increase to consumers, but we will try to minimise those costs because, at the end of the day, it’s going to be market-driven, and we have to be competitive,” he told the Financial Gleaner.

Other large manufacturers, such as Seprod Limited, have warned of price hikes to come for similar reasons, and the Jamaican government is taking notice.

The Financial Gleaner understands that a meeting is scheduled to take place with manufacturers, distributors and the Minister of Industry, Investment and Commerce, Audley Shaw, around the pricing of food items soon. But efforts to learn more on what the meeting is expected to achieve were unsuccessful.

GraceKennedy says, in order to control costs, it has instituted a forward-buying strategy to mitigate risks of greater fluctuations in prices for the remainder of the year. The conglomerate, which manufactures and sells a range of products under its own brands, the primary one being Grace, also distributes multiple products on behalf of third parties.

The conglomerate has manufacturing operations in Jamaica and overseas markets, which provides a level of advantage because of volume purchases that can service various units. Any price increase effected by the conglomerate will be applied to both its local and international markets.

Wehby is optimistic that the supply chain challenges will soon be ameliorated, but that it could take a while for shipping costs to fall back to pre-pandemic levels.

“But, at that time, it’s something that we are going to have to negotiate to get the prices rolled back … we are in a position to negotiate because of the volumes that we are buying,” he said.

Since the start of the year, GraceKennedy has seen consistent high demand for key products such as Grace Baked Beans, Grace Mackerel and Grace Corned Beef.

The pandemic-induced shift in consumer behaviour benefited food companies, among other key businesses, such as suppliers of medical and sanitary products. For GraceKennedy, it boosted revenue to a new record high of $115 billion last year. And the gains kept coming in the first quarter of 2021.

For the three-month period ending March, GK made net profit of $1.84 billion on a near nine per cent increase in quarterly revenue to $31.39 billion. Profits grew by nearly 27 per cent.

The platform, which has been in the works since 2017, is now being tested by a select group of shoppers from the Hi-Lo stores at Fairview in Montego Bay, and at Manor Park, Liguanea and Barbican in Kingston. It features a virtual shopping basket to which customers can add or subtract items.