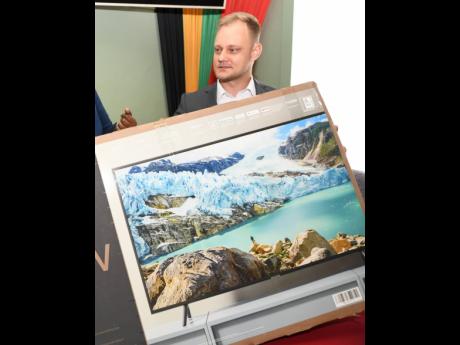 Managing Director of Medimpex West Indies Lukasz Kowalczyk hands over a television set as a donation to the Kingston Public Hospital in 2020. 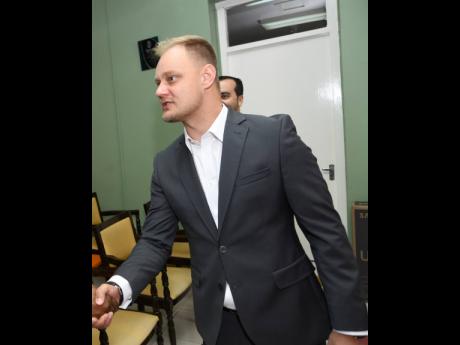 Global pharma company Medimpex has had a relatively good year, growing revenues and profit from the Caribbean region, led by its 42-year-old Jamaican operation.

At the height of the pandemic last year, revenues grew by 16 per cent to 3.8 billion Hungarian forints (US$13.3 million) over the prior year, while net profit inched up four per cent to 460 million forints, or US$1.6 million.

The financials of Medimpex West Indies are disclosed as part of the Budapest Stock Exchange filings by its listed Hungarian parent, Gedeon Richter.

While Medimpex’s other sizeable regional market, Trinidad & Tobago, has been beset by frequent, hard COVID-19 lockdowns, stifling sales there, and with pandemic-induced restrictions affecting commerce in its other English-speaking Caribbean markets, the pharma company’s wide array of over-the-counter vitamins and food supplements are in high demand in Jamaica. This has been attributed to persons paying more attention to their health and seeking to build immunity and overall wellness in response to the pandemic, Medimpex Managing Director Lukasz Kowalczyk.

Sales of cold and flu medications and antibiotics, usually big sellers for the pharmaceutical firm, are reported to have nosedived in the pandemic period as a result of better health practices from the widespread observation of COVID-19 protocols, including frequent handwashing, mask wearing and social distancing. Female contraceptives also did brisk business during the year, living up to the Richter group culture of female health products being its biggest sales category worldwide.

The group is a leading manufacturer and distributor of prescription drugs, but is not a player in the development and sale of pharmaceuticals for COVID-19 prevention. At least one of its antibiotics, Kowalczyk said, was recommended for treatment to prevent bacterial infection in people with COVID-19. Medimpex also carries its own brands of hand sanitisers and medical scrubs, which are used for pre- and post-examination and operation hygiene in healthcare facilities.

More than 30 new drug formulations, including contraceptive pills, antibiotics and hypertension treatments, intended to be introduced into the Jamaican market, Kowalczyk reports, are awaiting approval by the Ministry of Health and Wellness, where, he says, a backlog of approvals appears to have been exacerbated by the pandemic.

Non-medication items, including a new mosquito repellent, are also awaiting final authorisation as part of the company’s plans for greater market share, sales and profit.

Kowalczyk, who recently returned from reporting to the parent company’s annual board meeting in Budapest, Hungary, has been heading the multi-market’s West Indies business segment since June 2019.

The 2020 out-turn, said to have earned positive feedback from the decision-makers in Budapest in light of pandemic-ravaged earnings and profits in some bigger markets worldwide, was also driven by expanded product storage capacity that came on stream in Jamaica early last year, leading to higher stock levels and little or no stock-outs during pandemic months last year, Kowalczyk said.

In February 2020, just ahead of Jamaica discovering its first case of COVID-19, Medimpex Jamaica gave up its 8,500-square-foot office space at shared premises on Ripon Road in Kingston for a leased complex at Balmoral Avenue with more than twice the square footage. At the time, the company also brought on more sales reps to better distribute its products across Jamaica, with similar marketing and distribution upgrades in other Caribbean territories.

Medimpex’s warehousing operation in Jamaica, out of which its Caribbean markets are supplied, was designated a special economic zone at the port of Kingston in January last year. From there, supplies are trans-shipped without being customs-landed in Jamaica to Trinidad & Tobago, Barbados, Antigua, The Bahamas, Barbados, British Virgin Islands, Cayman Islands, Dominica, St Lucia, St Kitts-Nevis, and the Turks & Caicos Islands.

Kowalczyk is also crediting his 57-member Jamaican staff for having understood the company’s need to freeze some benefits, including annual performance incentive payments, in a bid to rein in costs. This also resulted in the company keeping its head count intact and following through with marginal additional recruitment.

Cost of production is said to have shot up during year, with the company bearing the brunt of the increases without passing them on to consumers, a decision that Kowalczyk said restrained profit.

“Our sales were good, but our turnover was affected by increasing cost of goods, which was related to the pandemic. The cost of inputs from manufacturers went up, the cost of moving goods was higher,” said the Medimpex Jamaica managing director.

He pointed out that the company used the opportunity of the pandemic to restructure some aspects of its operations and systems to ensure greater efficiency and growth now and in the post-pandemic period.