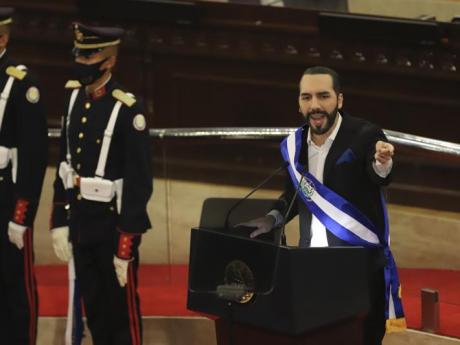 SAN SALVADOR, El Salvador (AP) — El Salvador's Legislative Assembly has approved legislation making the cryptocurrency Bitcoin legal tender in the country, the first nation to do so, just days after President Nayib Bukele made the proposal at a Bitcoin conference.

The digital currency, originally created to be money out of the control of governments, can be used in any transaction and any business will have to accept payment in Bitcoin, with the exception of those lacking the technology to do so.

The US dollar will also continue to be El Salvador's currency and no one will be forced to pay in Bitcoin, according to the legislation approved late Tuesday.

“Every restaurant, every barber shop, every bank....everything can be paid in US dollars or Bitcoin and nobody can refuse payment,” Bukele said in an hour-long social media hangout with thousands of US-based Bitcoiners as the bill was being debated Tuesday night in El Salvador's congress.

The exchange rate between the two currencies will be established by the market and all prices will be able to be expressed in Bitcoin — though for accounting purposes, the dollar will continue to be the currency of reference.

The government will promote training for people to be able to carry out transactions using Bitcoin, which has been used for people trading in black markets to avoid government oversight.

The Economy Ministry noted that 70% of Salvadorans do not have access to traditional financial services and it said the country “needs to authorise the circulation of a digital currency who value exclusively follows free market criteria” to stimulate growth.

“The Bitcoin law is ambitious, but simple,” Bukele said on Twitter.

“Furthermore it is well structured to have zero risk for those who do not want to take risks. The government will guarantee the convertibility to the exact value in dollars at the moment of the transaction. ”

The law would create mechanisms to help Salvadoarans, especially small businesses, quickly convert payments they receive in Bitcoins into dollars -- helping them avoid the risk of the value plummeting, as it had in recent days

The legislation established a government fund that will guarantee the automatic convertibility to dollars.

“We might earn some money or we might lose some money, but it doesn't matter. The purpose of the trust fund is not to make money but to support making Bitcoin a legal tender.”