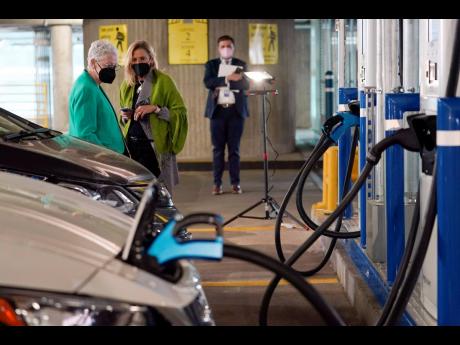 The Office of Utilities Regulation, OUR, invited me to its webinar, ‘Creating a Regulatory Framework for Electric Vehicles in Jamaica – What’s Needed’, last Wednesday. Unhappily, I could not attend.

That event, however, was another example of how OUR, an agency whose work I have long admired, proactively adjusts to changes in the environment – a practice its non-bank regulatory ‘bredrin’ on Barbados Avenue could emulate. I am also indebted to this newspaper for reporting on the webinar. These were the stimuli for today’s thoughts.

Here are the key takeaways from the OUR’s 99-page May 2021 stakeholders’ consultation document:

• Major vehicle manufacturers in Europe, Japan and the USA have announced plans to move away from making internal combustion engines, ICE, to EVs.

• These developments have implications for the supply and sustainability of the Jamaican transport sector. They also highlight the need for the country “to move with alacrity to ensure the facilitation of rapid take-up of EVs to replace ICE vehicles”.

• The price of an EV in Jamaica is estimated at 30 per cent higher than a comparative ICE vehicle, based on the current manufacturers’ prices, taxes and duty.

• EVs have fewer and simpler components; maintenance costs are projected to be lower than those of an ICE.

Today’s column will follow the OUR’s example. It will examine the insurance implications of EVs.

Allianz is a big German insurance company that has been studying the insurability of EVs. The findings of its research, in my opinion, are certain to influence the opinions of local motor insurers when they find the time to start thinking about the subject. If the reported remarks of the new president of the Insurance Association of Jamaica are any indication, the insurability of EVs will remain a back-burner issue for some time.

• Safety and reliability: Tests conducted by the Allianz Center for Technology Automotive have shown that the high voltage components of electric cars are well protected and will not be affected in most crashes. Statistical evaluation of Allianz claims also shows that electric vehicles are less likely to be involved in accidents today – they typically drive short distances with limited mileage overall. However, any damage sustained can be, on average, more expensive than for conventional cars.

• Fire threat: As with conventional vehicles, defective electrical components and short circuits can spark a fire, while lithium-ion batteries may combust when damaged, overcharged, or subjected to high temperatures. High voltage battery fires can be very intense and difficult to extinguish and can also release high levels of toxic gases. Such fires can take 24 hours or longer to control and be made safe. Because of the relative rarity of such fires to date, response and rescue services have limited experience in dealing with such incidents.

• Cyber concerns: Electric cars are likely to have increased connectivity and reliance on data, sensors, and software, including artificial intelligence, to manage vehicle systems and aid driving. As with conventional vehicles, increased connectivity is likely to give rise to cyber vulnerabilities, including the threat of malicious attacks, system outages, bugs, and glitches. There has already been product recalls in the automotive sector because of cybersecurity.

• Claims complexity: Electric vehicles will consist of fewer but more integrated parts and components. What may have been three parts in a conventional car could be only one part in an electric car. However, the lower number of parts is increasingly connected through sensors and embedded software, adding a new layer of complexity and raising questions around how these parts interact and which producer or supplier is liable for a potential defect or faulty control. The increased complexity of the automotive supply chain and the reliance on software and technology producers will lead to new exposures and split liabilities in the value chain.

ValuePenguin compared the insurance premiums for four vehicles that are available in both electric and combustion models in New York. The vehicles were a Fiat 500 series, Ford Focus, Kia Soul and Chevy Spark. They were priced between US$13,000 and US$25,000.

The survey found that if a consumer’s premium for an ICE vehicle was $1,000 a year, he or she would instead be paying anywhere from US$1,180 to US$1,320 a year for the EV version. The increase was because the prices of EVs are higher than the equivalent ICE model and are more expensive to repair in the event of a crash. Even if the driver is not riskier, insuring an electric car can potentially expose the insurance company to more expensive costs than insuring a gas car.

My prediction is that local motor insurers will follow the lead of their overseas counterparts and charge more to insure EVs than the equivalent ICE vehicles.