Dairy Board banking on new entrants, prolific cows to pump up market supply 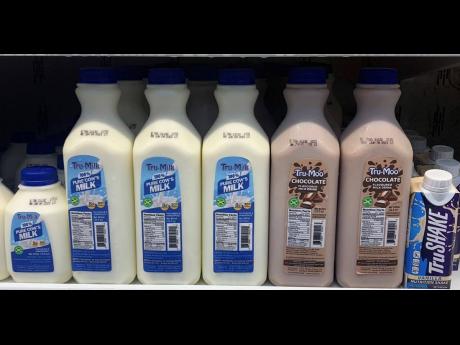 The newest milk products to be introduced to the market, Tru-Moo and Tru-Milk, are made by newcomer to the dairy market Trade Winds Citrus Limited. 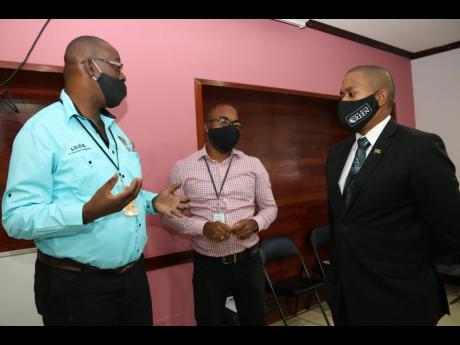 Everton Parkes, CEO of the Jamaica Dairy Development Board.
1
2

Jamaica Dairy Development Board, JDDB, is anticipating growth in local milk production to 15.1 million litres by December and is banking on new market entrant Trade Winds Citrus Limited to assist in getting to the desired national target. The...

Jamaica Dairy Development Board, JDDB, is anticipating growth in local milk production to 15.1 million litres by December and is banking on new market entrant Trade Winds Citrus Limited to assist in getting to the desired national target.

The sector would have to grow annual milk output by 16 per cent to hit the target, a tall order given that output for the past four years combined has grown only eight per cent.

It has been five years since a special campaign to stimulate the dairy market was unveiled, with modest results, so far, in terms of increased output but also new market entrants and new products.

When the JDDB partnered with Newport Fersan (Jamaica) Limited, CB Group’s animal feed business Nutramix and Seprod Limited on the launch of the Drink Real Milk Campaign back in 2016, Jamaica Beverages Limited was named as one of milk processors with which discussions were ongoing to assist with reviving the ailing sector.

Trade Winds, a juice maker that wanted a taste of the milk market, took up the mantle when it acquired Jamaica Beverages last October to help the sector get to a target of 35 million litres of milk by 2030.

Trade Winds has since ventured into its own dairy farm and expects to milk some 250 cows this year. Its contribution to the market, in terms of new products, includes the newly released 100% pure Tru-Milk, and in terms of volume output, around 60,000 litres of milk per month, with an annual 720,000 litres projected for this year.

Jamaica has seen marginal growth in its milk production since the start of the campaign, rising from 12 million in 2016 to little over 13 million litres at the end of 2020. Nonetheless, there has been a flood of milk and milk alternatives released on the market in recent months, four of which are linked to Trade Wind’s recent entry into the milk business.

Although the product options have been climbing since last year, the JDDB is a bit peeved that only one qualifies as ‘real milk’.

Caribbean Foods Limited, producer of the Foska brand, was the latest to introduce an alternative milk product, in the form of oat milk, the first beverage to be produced by the company, which has been in the oats business for nearly six decades.

Trade Winds’ launch of Tru-Milk and Tru-Moo chocolate milk earlier this month adds to the TruShake and Tru-Almond products launched by the company in November 2020.

“While these are more milk-based options for consumers, only Tru-Milk would be categorised as real milk. The others are beverages, and so there is still a lot of space in the market for real milk to be consumed by Jamaicans and to slow the importation of milk and milk substitutes for use as raw material,” said Dairy Board CEO Everton Parkes in an interview with the Financial Gleaner.

Phase Two of the ‘Drink Real Milk’ campaign was expected to be a fixer for Jamaica’s underserved milk market, with an educational component for farmers and consumers to ensure the production and consumption of local grade ‘A’ milk.

That would have been followed up with activities in partnership with supermarkets and retail stores, but the campaign’s outdoor programme slowed with the outbreak of COVID-19, Parkes said.

The Dairy Board has since recalibrated and has put in motion other plans to get production numbers up and to have more Jamaicans consuming more milk, including working with small dairy farms, as well as re-engaging agricultural institutions that were once producers of milk to get back into business.

The latter group includes Portland-based College of Agricultural Science and Education; Ebony Park Heart Academy in Clarendon; Knockalva Technical High in Hanover; and St Elizabeth-based Sydney Pagon Science, Technology, Engineering and Mathematics Academy. Those schools will be targeted in the short term, after which JDDB will approach Monroe College, Dinthill Technical High School, and Northern Caribbean University to get on board.

“We are aggressively targeting these institutions that normally produce milk at a high level but are now not producing. We are going to be providing them with a total of 250 heifers. That has a double effect because those are also the centres where most of our agricultural manpower comes from. So our extension officers and workers will be trained to serve the diary industry at the same time,” Parkes said.

The dairy sector comprises 75 farmers, inclusive of large operators such as Serge Island and Trade Winds, who manage 6,000 cows in total.

To make those cow more productive, JDDB has invested in new varieties of grass, which is said to be more nutritious for the animals and assists with milk yield.

“Last year we produced a little under 6.0 litres of milk per cow per day. This year, we are targeting about 7.5 litres with this new fodder from the same number of animals,” Parkes said.

“The other area we are focusing on is the matter of genetics, which is more of medium to long-term programme because it takes time for the animal to breed and start producing milk,” he disclosed.

Parkes says the JDDB has been working with the island’s Cattle Breed Society on a genetics programme to develop more productive breeds through artificial insemination.

Cow pastures across the island are mainly made up of the breed Jamaica Hope. JDDB aims is to introduce more Jersey and/or Brown Swiss cattle.

Trade Winds is also planning to introduce a new breed of Costa Rican cows through artificial insemination, having been refused import permit of the live animals, based on the risk of exposing the local cattle to bovine spongiform encephalopathy or ‘mad cow’ disease.

The Girlando cows, a hybrid developed for tropical countries like Jamaica, can yield 22 litres of milk per day, doubling that of the Jamaica Hope.

The breeding of such cows would serve to push the dairy sector to the 35 million target faster, but Parkes said the JDDB had to move cautiously to ensure it has resources to properly manage any animal that comes under its care.

“We will watch to see how the Girlando cows produce under local conditions. But as for the Jersey, we are accustomed to that breed, so while we are not averse to introducing the additional bloodline, we want to ensure that whatever comes in complements what we have already. Those are much larger cows, and they also take a lot more feeding, so we’ll watch and see what happens,” he said.