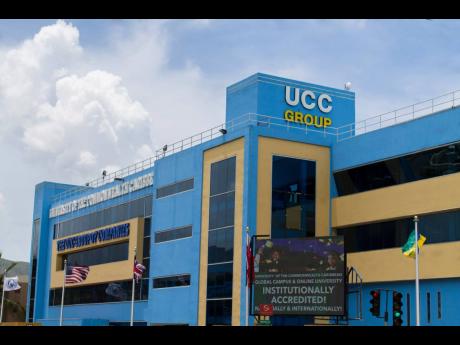 The University of the Commonwealth Caribbean Building in New Kingston.

Seeking the best path to growth, the University of the Commonwealth Caribbean, UCC, has this year formally spun off several business activities into a number of subsidiary companies as part of a strategy it has been developing since last year.

Executive Chairman Winston Adams and his wife, Geraldine Adams, who are 50-50 shareholders in Jamaica-registered UCC, are also the principals of UCC Group Limited, which was registered in St Lucia earlier this year.

The UCC Group shareholders also include their children, and shares are also to be offered to members of the university’s senior management, Chairman Adams said. The precise ownership split was not ascertained.

The group approach seeks to accelerate vertical integration across the university operations, with Adams noting that entrepreneurship has always been part of the UCC business culture. The strategy capitalises, he says, on the various needs – including housing, office space, mortgages, motor vehicle and student loans – of the working adult learners, who make up more than 90 per cent of the university’s student population.

A limited liability company since 2011, the 17-year-old educational institution that began as the University College of the Caribbean in 2004 from the merger of the Institute of Management and Production and Institute of Management Sciences, acquired in 2002, now has five other subsidiaries in addition to UCC. Global Knowledge Outsourcing Limited, Spectrum Capital Partners, and UCC Real Estate Investment Development Limited are involved in business process outsourcing, private equity, and real estate, respectively.

The lynch pin of the overseas education market penetration bid is UCC Global, which is said to now offer more than 90 undergraduate and postgraduate programmes while the UCC Academy is seeking to expand non-traditional areas of the local education market.

The latter is the arm that serves students who have not attained formal university matriculation requirements but are able to access higher education largely in technical and vocational fields based on work experience and base technical training.

Already, some 2,000 of UCC’s 7,000 students are enrolled in traditional associate degrees and vocational degrees as part of the government-sponsored K-13 programme – kindergarten to grade 13 – to keep students in school for two more years beyond grade 11 at the secondary level.

This enrolment, as well as what the UCC executive chairman describes as the institution’s ability to have transitioned seamlessly online with the advent of the pandemic, coupled with massive tuition discounts to students, resulted in student numbers growing from 5,500 at the onset of the pandemic last year to its current 7,000.

This strategy is said to have also grown revenues for the university, which is said to be funded almost entirely by tuition fees, having been debt-free since 2019 according to Adams. While approaches are being made to government and the private sector to grow the UCC Academy offerings, UCC Global has been identified as the subsidiary with the largest growth potential.

Pressed for details on the size of the university’s operations and turnover, Adams did not share financial reports or the private company, but in an interview with the Financial Gleaner said that UCC and UCC Academy have average annual revenues of $1.5 billion. Significant cost-cutting and rationalisation of space and operations for greater efficiencies have been part of the university’ business plan, particularly since the pandemic, according to the executive chairman. Cost containment included reduced pay for some of UCC’s 220 full-time staff in the early months of the pandemic, according to Adams.

He also spoke of a raft of plans aimed at growing the university, which has eight campuses across Jamaica, and attracting equity funding. While many of these have been echoed by the UCC head over the years, the pandemic experience has given renewed impetus to the growth plans, Adams said.

The 2011 UCC change of registration from a not-for-profit educational venture to a profit-seeking limited liability company included some 2,000 unissued shares. This was done, the executive chairman noted, with the intention of eventually inviting public shareholding through an initial public offering, which he said is still on the cards, with two brokerages already engaged as arrangers for the planned IPO. Adams, however, declined to name them.

The hunt for equity investment is being spearheaded by Spectrum Capital Partners, which, Adams says, will be seeking to raise funds for other business ventures to further build out the entrepreneurial activities of the group. The UCC group is said to be advanced in negotiations for at least two acquisitions: a realtor and a microfinance firm.

While UCC has a seven-member board including business persons and academics, the governance structure for the group is still being put in place, with Adams indicating that a group board is expected to be named by the time of the new academic year in September.

Former Governor General Sir Kenneth Hall retired as the university’s chancellor on May 31, with a search now on for a replacement. Adams says Hall continues his association with UCC in an advisory capacity and is helping to steer a current partnership with the University of Arizona in the United States for the award joint degree programmes.