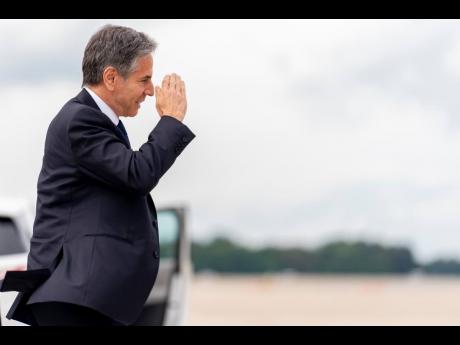 AP
US Secretary of State Antony Blinken boards his plane at Andrews Air Force Base at Maryland on Tuesday, June 22, to travel to Berlin Brandenburg Airport in Schonefeld, Germany. 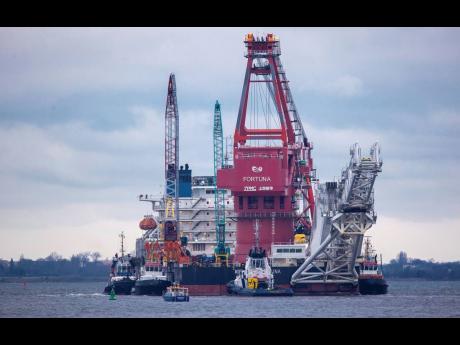 AP
Tugboats get into position on the Russian pipe-laying vessel ‘Fortuna’ in the port of Wismar, Germany, on January 14. The special vessel is being used for construction work on the German-Russian Nord Stream 2 gas pipeline in the Baltic Sea. 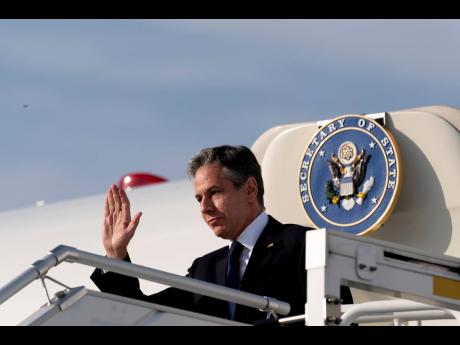 AP
US Secretary of State Antony Blinken arrives at the Berlin Brandenburg Airport in Schonefeld, Germany, on Wednesday, June 23.
1
2
3

T he United States and Germany struggled on Wednesday to resolve a major dispute over a Russian gas pipeline, even as the Biden administration seeks to improve relations with Western Europe that had been strained during Donald Trump’s presidency.

US Secretary of State Antony Blinken and his German counterpart, Heiko Maas, met in Berlin and extolled the depth and strength of US-German relations, but there was no sign of progress in talks to overcome the impasse over the Nord Stream 2 pipeline. And neither Blinken nor Maas could offer a timetable for a possible resolution.

“We don’t always agree and one of those areas of disagreement is the Nord Stream 2 gas pipeline, which we continue to believe is a threat to European energy security,” Blinken said. “Germany has a different perspective and that happens from time to time. We’ll handle our disagreements while pressing ahead on the many areas where we are working very closely together.”

In addition to increasing the continent’s reliance on Russian gas, the US believes the pipeline will become a tool for Russia to exert political pressure on vulnerable Eastern and Central European nations. As such, the project continues to be a significant irritant in US-German ties, despite steps by the Biden administration to cool the dispute.

Speaking alongside Blinken at a joint news conference, Maas said Germany was well aware of the US concerns and trying to address them.

“We are engaging in these talks,” he said. “We are aware of the expectations from Washington and it is of the utmost importance.”

Maas said that Germany is also speaking with Ukraine and other countries bypassed by the pipeline, with an eye towards guaranteeing them an alternative energy supply.

“There is a whole host of ways and means and approaches that we are discussing, but we are not discussing them in public,” Maas said.

Ideally, he added, a resolution could be reached by the time outgoing German Chancellor Angela Merkel visits Biden in Washington next month. But, Maas stressed that timing was aspirational only.

Blinken met later with Merkel and neither mentioned the pipeline in brief welcoming remarks.

Favour for the project

Despite US opposition and strident objections from Poland and Ukraine, Merkel strongly favours the project, which has been one of Russian President Vladimir Putin’s key initiatives to increase Russia’s energy revenue.

The pipeline also faces strong bipartisan opposition in the US Congress, where both Republican and Democratic lawmakers harshly criticised the administration for waiving sanctions against the German firm constructing it, the company’s German CEO and several other executives in May. Critics saw those sanctions as a last-ditch effort to prevent completion of the pipeline that is now more than 95 per cent constructed.

In waiving the sanctions against Nord Stream 2 AG and the executives, the White House rejected recommendations from the State Department and other agencies in favour of imposing the penalties, according to officials and congressional aides. Biden’s National Security Adviser Jake Sullivan argued that the sanctions would do more harm than good in terms of repairing ties with Germany, they said.

Blinken is in Germany on his second visit to Europe in seven days, having just accompanied President Joe Biden to leaders’ summits in Britain and Belgium. In his meeting with Maas, Blinken emphasised the ‘America is back’ message that Biden also delivered last week.

Maas welcomed the commitment that Blinken is also expected to pass on to Merkel in a later meeting. He said Biden’s visit, coupled by Blinken’s return to Europe so quickly, “underlined impressively that America is back: Back on the multilateral and international stage and we’re very pleased by this”.

Merkel echoed that sentiment in her comments before meeting Blinken, saying Germany was “delighted” with Biden’s pronouncement. “Given all the controversies in the world, I think it’s fair to say we need to keep channels of dialogue open,” she said.

Biden administration officials insist that there are still ways to mitigate the pipeline’s impact. They say that even after the project is physically completed, there are still permits, insurance and testing hurdles it must clear before becoming operational. Some officials believe that could delay its opening by nine to 12 months.

After Germany, Blinken was bound for France and Italy as part of his week-long tour, his first trips to all three nations as secretary of state.