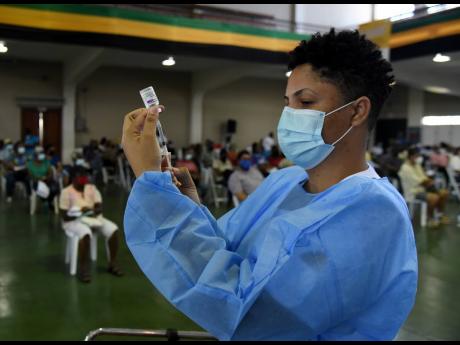 Ian Allen/Photographer
Sasha Johnson, a registered midwife, prepares to administer the Oxford-AstraZeneca COVID-19 vaccine for persons 50 and older who turned out for their second dose at the National Arena on June 19. Regional countries, including Jamaica, lag the developed world in the distribution of vaccines and will have a slower economic recovery as a result.

Like everyone else, Latin America was ill prepared for the COVID-19 pandemic. The region’s health expenditures trail most of the world, with health spending accounting for 6.6 per cent of GDP. This was in contrast to the 8.8 per cent of GDP that was spent in OECD countries.

The United States spends about 16.9 per cent of GDP on health, while, according to a World Bank study, the Latin American and Caribbean countries with the highest health expenditures were Brazil, 9.5 per cent, and Uruguay, 9.2 per cent.

The Latin American and Caribbean countries with the lowest outlays were St Lucia, 4.4 per cent, and Venezuela, 3.5 per cent.

More than one million Latin American and Caribbean deaths have been attributed to the disease. This is a little less than a third of global deaths, even though the region has only 8 per cent of the world’s population. One of the problems for the high mortality rate has been a lack of hospital equipment. Latin America has 1.8 hospital beds per 1,000 inhabitants, versus 2.8 bed in the US. Japan leads the global league tables with 13 beds per 1,000 inhabitants.

Such a low number of hospital beds, particularly in intensive care units, or ICUs, meant that the health authorities could not deliver the oxygen and treatment needed for infected patients. As a result, Latin American governments have been forced to rely on draconian social-distancing measures to keep the disease at bay.

Not surprisingly, the region entered a steep recession in 2020, with GDP declining 7.7 per cent year-on-year. The Bahamas was the worst hit, with the economy shrinking 16.2 per cent. It was hit by a trifecta of body blows, which included two major hurricanes, the collapse of tourism, and money laundering charges. Panama was next on the list, with a GDP decline of 13.2 per cent, due to the shutdown of its services sector. Argentina came in next, with a drop of almost 12 per cent.

Unending lockdowns led to a collapse of economic activity. Moreover, heterodox economic policies and an antagonistic posture towards the private sector prevented the country from fully capitalising on the rise in commodity prices.

The recessions in other large countries were deep, but not as severe, such as Peru (-11 per cent), Mexico (-10 per cent), and Ecuador (-9 per cent). The rest of the region saw more moderate declines in GDP. Chile and Colombia shrank about 6 per cent, Brazil dropped 4.1 per cent, and Paraguay slipped only 0.6 per cent.

Brazil’s cavalier attitude towards the pandemic also explains why it represented almost half of the region’s million deaths, even though it only has about a third of the region’s population.

Two problems help explain why the region has suffered so much. The first is the lack of vaccines. Although the region has strong pharmaceutical capabilities, the COVID vaccines involve new technologies that are mainly available in developed countries. Only Cuba has made meaningful progress in developing its own COVID-19 vaccine.

As a result, Latin American governments have been forced to buy doses on the open market. Only the three Chinese vaccines, Sinopharm, Sinovac and Cansino, along with Russia’s Sputnik V, are readily available. Governments have been able to secure some AstraZeneca and small doses of Pfizer.

As of this month, only 3 per cent of the total Latin American population has been fully vaccinated. This is the reason infections continue to grow. The other problem is extreme overcrowding.

In general, Latin America is thinly populated, given the size of the countries. However, most of the population tends to concentrate in megacities, such as São Paulo, Mexico City, Bogotá and Buenos Aires. The large numbers of poor crowd into slums, like the infamous favelas and villas miserias, where social distancing is impossible.

Little can be done to avert the propagation of the disease, other than mass vaccination programmes. The sense of distress has led to outbreaks of social unrest and extreme violence. Riots have been registered in Colombia, Paraguay, Argentina and Brazil. Leftist movements have gained ground in those countries, along with Peru and Chile.

Unfortunately, the outlook does not look so good for the rest of the year. Continued lockdowns are going to restrict the recovery to only 4.7 per cent y/y this year, compared to the 7 per cent or more that is expected in the US.

A full recovery is not expected until 2022. Fortunately, high commodity prices will help push the region to a brighter future. But the fragile nature of Latin American institutions means that the pathway will not be an easy one.