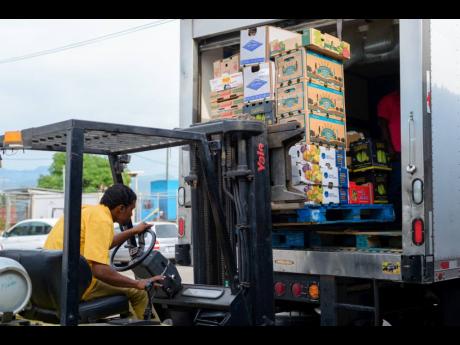 File
A forklift operator loads goods on a truck at Everything Fresh Limited in Kingston.

Food distributor Everything Fresh Limited, EFresh, has exited the business of animal slaughter and processing of meats after more than two years of negative returns from subsidiary Meat Experts. The company is back to focusing resources on its...

Food distributor Everything Fresh Limited, EFresh, has exited the business of animal slaughter and processing of meats after more than two years of negative returns from subsidiary Meat Experts.

The company is back to focusing resources on its traditional importation and distribution business, but says it will use the cold storage facility at Meat Experts Limited in St Catherine to support the growth of EFresh.

Meat Experts has its own abattoir, cutting, processing, packaging, cold storage facilities, and logistics network, and its new line-up of products was expected to help pull the company out of losses it was making in 2018. But following its integration, Meat Experts, which was acquired in 2019, dragged Kingston-based EFresh into deeper losses.

Now, little over a year later, EFresh has announced that it is closing the production plant altogether.

“We have scaled down the meat production business, in that we have stopped slaughtering and the processing of whole carcasses, because the cost of live animals is volatile and unpredictable,” Chief Financial Officer for EFresh Bruno Loffler told the Financial Gleaner, following the company’s annual general meeting on Wednesday.

“This approach gives better control of our costs, since we now purchase when the prices are reasonable. The main focus, however, will continue to be on our traditional import and distribution business,” he said.

EFresh first hinted at modifications of its business lines in May, the same time when it announced its diversification into a snack line under the brand Deep River and shortly before announcing the acquisition of EFresh Bahamas.

Loffler said the review of the business lines is now complete and that the company has no immediate plans to exit any other business operation, but will continue to monitor all divisions.

EFresh said a “small” number of staff was separated from the company after the lockdown of the meat operation, but has not disclosed the number of persons the plant employed. However, Loffler said the majority of them were reassigned and absorbed elsewhere in EFresh’s operation.

“One of the reasons that we entered the meat business was to support our local farmers, because we are dedicated to the development of our country. That move proved premature, as Jamaican farmers are still inconsistent with pricing, quantity and quality. But that will change for the better as domestic entities increase their efficiencies,” Loffler said.

EFresh will, in the short term, offer its cold storage room on contract to external parties to earn income from it, but says that as sales from the import distribution trade trends back up to pre-COVID levels it will need all its cold storage capacity to support the EFresh operation. The company also said it doesn’t plan to offload Meat Experts.

“We will retain the ownership of Meat Experts. There is substantial goodwill there which will inure to the benefit of EFresh,” Loffler said.

The pandemic has been punishing for EFresh, which was 85 per cent dependent on the tourism market for business. Travel and hospitality businesses went into total lockdown when the virus began to spread in Jamaica, and are still struggling to recover.

EFresh has since rebalanced its revenue mix and now has 64 per cent of its business coming from the hotel and restaurant industries. The other 36 per cent comes from the wholesale and retail trade.