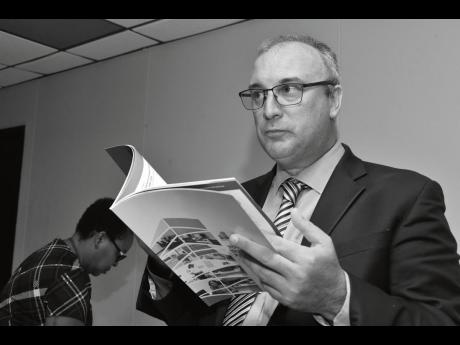 Chairman and CEO of Musson Jamaica, Paul B. Scott.

Productive Business Solutions Limited (PBS), which operates the Xerox franchise for the Caribbean and parts of Latin America, announced that it will acquire a third-party technology company branded as PBS Technology Group Limited (PBSTG) for cash and shares worth nearly US$53 million at Thursday’s pricing.

The PBS stock last traded on August 27, closing at US$0.77 on the Jamaican market. At that price, the PBSTG cash and shares combination deal would be valued at US$53.96 million.

CEO of PBS Pedro Paris said Friday that the combination of the two companies would increase PBS’ total equity from US$33 million to more than US$80 million.

“The share component of the acquisition consists of newly issued shares of PBS and will increase the company’s total share count. Notably, we believe that the transaction will be accretive to PBS shareholders, that is, we believe that considering both the additional shares issued by PBS and the additional earnings added by PBS Technology, PBS’ earnings per share will increase,” he said.

The technology company said in a release that the acquisition would accelerate its revenue growth, rising initially by 56 per cent from US$160 million in 2020 to about US$250 million under the combined entity. The expected earnings after core costs were not disclosed.

“We entered the integration process we have been preparing for. Our objective is not the cost of this transaction, but what it is worth, combining our fantastic talent,” said PBS CEO Pedro Paris.

In 2020, PBSTG acquired Massy Technologies, an information technology and communications business operating throughout the Caribbean, from Massy Holdings Limited, a Trinidadian conglomerate.

The businesses, when combined, will operate in 19 countries and employ over 2,100 information technology professionals.

“Together, PBS and PBS Technology will create an unrivalled platform that covers the Caribbean and Central America. Our increased scale and combined resources will allow us to better serve our clients and offer exceptional value to global technology brands seeking to do business in our region,” said Scott in the release.

“This is particularly true in the current environment, which has accelerated the pace of technological adoption and highlighted its vital importance to our economic recovery,” he said.