Revenues dip to $15b for telecoms during pandemic 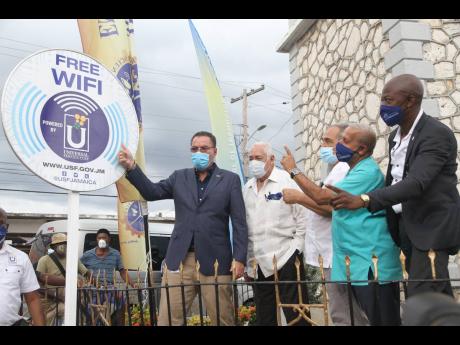 In this file photo, Minister of Science, Energy and Technology Darly Vaz, unveils a Free Wifi sign at the launch of the Universal Service Fund (USF) Free public WiFi in May Pen, Clarendon in November 2020. He was accompanied by (from left) Member of Parliament for Clarendon Central Mike Henry, Custos of Clarendon William Shagoury, May Pen Mayor Councillor Winston Maragh and USF CEO Daniel Dawes,

Despite the COVID-19 pandemic having driven much of Jamaica’s business and social activities online, there has been a mere 4.5 per cent increase in the availability and use of broad internet service – both fixed and mobile – in the country over one year of the pandemic from March 2020 to March this year. At the same time, the revenues of telecommunication firms fell by 3.5 per cent over the one-year period to March 2021, according to regulatory data.

The data covers the telecoms sector which includes some 105 licensees, the largest being Flow Jamaica and Digicel Jamaica.

Figures from the Market Information Report for the quarter January to March this year, published this month by the Office of Utilities Regulation, OUR, show that the telecoms sector generated revenues of roughly $15 billion between January and March 30 2021, just some $200 million less than their $15.2 billion income in the last three months of 2020. Last year’s final quarter revenues were the same as the income they generated during the first three months of 2020.

The 2021 first quarter revenues were split between mobile services, which generated $12.6 billion, and fixed line revenue at $2.4 billion. That equated to a drop in mobile revenue of 3.3 per cent compared to March 2020, and a decliune in fixed line income of 4.8 per cent year on year. Telecom firms offer internet on both fixed and mobile segments of the business and the OUR no longer disaggregates internet revenue.

Total revenues from international calls are also down some 12 per cent over the levels of the October to December quarter of 2020, a decline that has been a feature of the year since January 2020 and in fact, several recent years since the growth in free internet-based calling apps. This has had significant negative consequences for financing the government-led buildout of internet coverage and other technological developments financed by a levy on incoming international calls.

This is despite large swathes of services including banking, food purchases and other forms of commerce, government services and the education of the nation’s children at all grade levels for the better part of more than a year, having all migrated online. This suggests that relatively few additional Jamaicans are accessing services online, more than one year after the discovery of the first case of COVID-19 in Jamaica.

Since the onset of the pandemic, access to the internet moved from being utilitarian to essential as a major means of learning, according to the latest Economic and Social Survey Jamaica, ESSJ, 2020 published by the Planning Institute of Jamaica, PIOJ, this year. The ESSJ report cited a study of 600 students across five tertiary colleges, citing that 95 per cent of them were engaged in virtual learnings. Despite its importance some Jamaicans still have inconsistent connectivity, the PIOJ report had noted.

“Internet connectivity was the most pressing challenge noted by institutions,” stated the ESSJ.

The slow expansion in access to internet runs counter to pronouncements by the Government of a concerted push to increase connectivity, especially in rural areas of the country that continue to be disadvantaged by the technology gap made wider by the pandemic.

By contrast to the Jamaica situation, data published by the multisectoral COVID-19 Economic Recovery Task Force showed high-speed internet penetration in some developed European countries such as Norway, Iceland and Sweden to be between 96 per cent and 99 per cent.

The OUR report, however, shows that the Government could take credit for a more substantial internet penetration increase over the longer term of the five years since 2016, which corresponds with its period in office. During that time, the number of Jamaicans with internet access moved from 1.6 million persons or just under 60 per cent of the population, to the current levels of more than 70 per cent.

Citing Jamaica’s high level of smartphone ownership, with a SIM penetration measured at above 100 per cent, the Government has been rolling out a public Wi-Fi hotspot programme in both urban and rural areas funded by state agency Universal Service Fund, which is financed by the dwindling levy on inbound telephone calls.

The Government was also said to be pursuing the development of a national broadband infrastructure that would include providing open access to all with faster acceleration to next-generation technology, reducing costs and ushering in new economic activities.