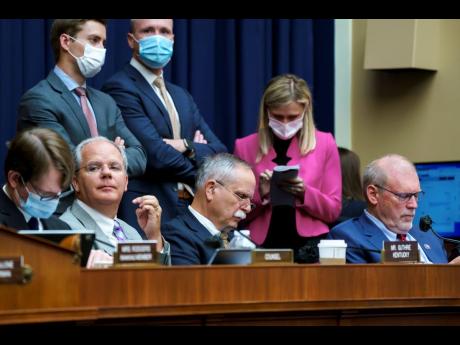 The Associated Press
US House Energy and Commerce members, seated from left, Representatives Brett Guthrie, David McKinley and Morgan Griffith., listen during votes on amendments during work on the “Build Back Better” package, cornerstone of US President Joe Biden’s domestic agenda, at the Capitol in Washington DC, Wednesday, Sept 15, 2021. (AP Photo) 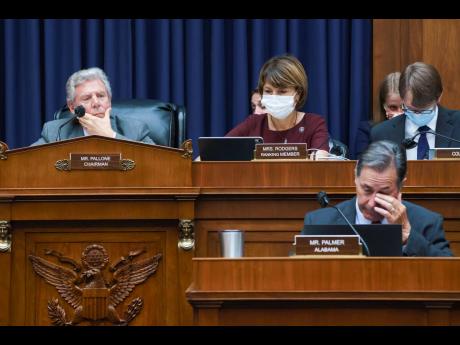 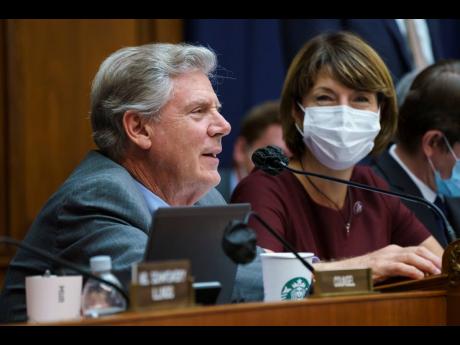 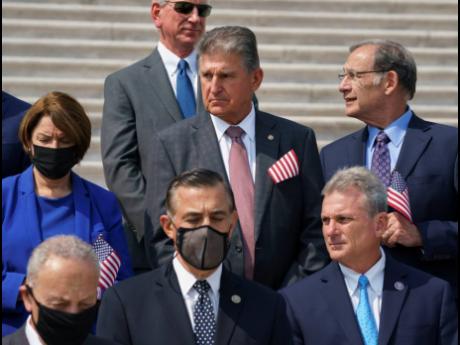 The Associated Press
Sen Joe Manchin, D-W.Va., stands beside Sen Amy Klobuchar, D-Minn., left, and other lawmakers on the steps of the Capitol during a Sept 11 remembrance ceremony, in Washington, Monday, Sept 13, 2021. As congressional Democrats speed ahead this week in pursuit of President Joe Biden’s $3.5 trillion plan for social and environmental spending, Manchin, a Democratic senator vital to the bill’s fate, says the cost will need to be slashed to $1 trillion to $1.5 trillion to win his support. (AP Photo/J. Scott Applewhite) 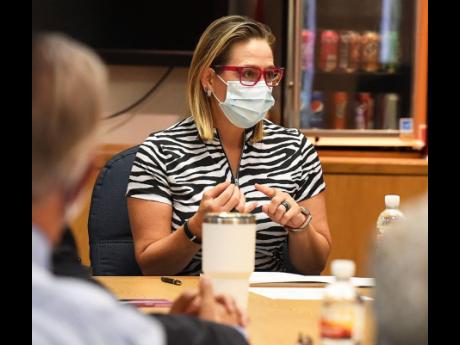 The Associated Press
US Sen Kyrsten Sinema, D-Arizona, speaks inside the Yuma International Airport conference room at the start of a round-table discussion of the bipartisan Infrastructure Investment and Jobs Act, Monday, Aug 23, 2021, in Yuma, Ariz. (Randy Hoeft/The Yuma Sun via AP) 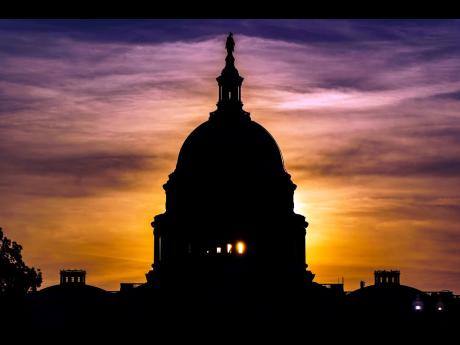 The House Energy and Commerce Committee dropped the proposal from its piece of Biden’s signature domestic initiative on a 29-29 tie vote last week, with three moderate Democrats joining Republicans to oppose the pharmaceutical provision. The defeat underscores the power that centrists – or any small group of Democrats – have as Biden and party leaders try pushing the package through the narrowly divided Congress.

The defeat of the drug pricing language did not shut down Democrats’ path forward on the proposal because the House Ways and Means Committee is deliberating on nearly identical provisions.

The party is counting on the proposal, if enacted, to pay for a modest but significant part of their US$3.5 trillion, 10-year plan to bolster safety net, climate change and other programmes. Proponents say it could save $600 billion over the coming decade.

The Energy and Commerce panel’s vote came as Biden was holding face-to-face meetings with two moderate Democratic senators who have said the overall size of the US$3.5 trillion proposal is too big. The sessions underscored a White House drive to win the unanimous Democratic support the huge plan will need to survive in the 50-50 Senate.

Biden met with Sen Kyrsten Sinema, a Democrat from Arizona, and planned a later session with Sen Joe Manchin, Democrat of West Virginia. The emerging legislation represents the heart of the president’s domestic agenda, but centrist unrest has prompted a delicate hunt by party leaders for a top-line figure that moderate and progressive lawmakers can endorse.

Sinema’s spokesman John Labombard had a positive assessment of the senator’s White House session, a good sign in a process that has seen the party’s progressives and moderates stake out conflicting demands.

“Today’s meeting was productive, and Kyrsten is continuing to work in good faith with her colleagues and President Biden as this legislation develops,” Labombard said.

Biden and congressional Democratic leaders endorsed the $3.5 trillion figure, but in recent days have been more tentative about its ultimate size. The party will need every one of its votes in the Senate, along with Vice President Kamala Harris’ tie-breaking vote, and can lose no more than three Democrats in the House.

The enormous package of far-reaching and complicated policy changes comes with Democrats trying to take advantage of a window when they control the White House and Congress to enact long-sought goals. It faces unanimous opposition from Republicans, who say its proposed expenditures are wasteful and would wound the economy.

There would be a slew of tax breaks to help families cope with the costs of health care and raising children. Much of it would be paid for by boosting taxes on the wealthy and corporations.

The White House meetings came as the last of 13 House committees were pushing toward completing work on their individual sections of the overall bill.

Among those was the Ways and Means Committee. Chairman Richard Neal, Democrat of Massachusetts, has proposed a revenue package that includes US$2.1 trillion in higher taxes, mostly on the rich and corporations.

It also claims savings from its drug-pricing language, stronger Internal Revenue Service tax enforcement and an assertion that the legislation itself would spark economic growth. Democrats ridiculed that claim when Republicans used it to claim past Republican party tax cuts would be paid for.

Democratic leaders would love to send completed legislation to Biden for his signature in the coming weeks, but many think resolving the policy and political complications the party faces will take much longer. White House press secretary Jen Psaki told reporters Wednesday that they expect Congress to move the legislation before an international climate conference in November.

Manchin has been an especially outspoken critic of the overall bill. He’s called for a “pause” on the legislation, and said he could not support US$3.5 trillion.

He instead suggested a top-line figure in the US$1 trillion to US $1.5 trillion range. Progressives, who initially demanded a US$6-trillion plan, have said cutting the package to Manchin’s range would be unacceptable.

The chairman of the Senate Energy and Natural Resources Committee, Manchin has also told colleagues he opposes a House proposal to offer grants to power companies than provide more electricity from cleaner energy sources and charge fees to companies that don’t achieve that.

Asked Wednesday if the administration will have to scale back the plan’s climate change provisions, Psaki said those measures are “incredibly important” to Biden.

At the Ways and Means panel, Democrats are proposing that the top income tax rate rise back to 39.6 per cent on individuals earning more than US$400,000 – or US$450,000 for couples – in addition to a three per cent surtax on wealthier Americans with adjusted gross income beyond US$5 million a year.

For big business, the proposal would lift the corporate tax rate from 21 per cent to 26.5 per cent on companies’ annual income over US$5 million.

Neal has also proposed a boost in tobacco taxes and new levies on nicotine products that would raise US$96 billion over a decade. Asked if that would violate Biden’s pledge against raising taxes on people earning under US$400,000, Psaki said it wouldn’t and added, “This is an idea put forward, there are a range of ideas put forward.”

Republicans on the committee pushed to keep the corporate tax rate at 21 per cent, where it was set by former President Donald Trump’s 2017 tax law. That effort, facing failure in the Democratic majority committee, sparked heated partisan debate over the role of business in the economy and the use of tax loopholes by big corporations to avoid liability.