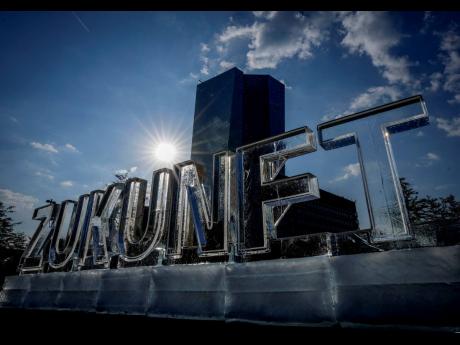 AP Letters of melting ice reading ‘Zukunft’ or ‘Future’ was set up by Greenpeace activists in front of the European Central Bank in Frankfurt, Germany, on Thursday, September 9.

The European Central Bank, ECB’s first climate stress test shows higher risks of loan defaults for banks in fire-plagued southern Europe and argues that an earlier and orderly shift to greener energy may have costs, but pays off for the economy over the long run.

The bank warned that its two more negative scenarios — a hasty effort to catch up to the problem or simply doing nothing — risked much higher costs and losses in economic output, especially further into the stress test’s 30-year time frame.

The stress test published September 22 compiled data gathered on more than 4 million companies worldwide and 1,600 banks in the 19-country eurozone, where the ECB sets monetary policy. It probed the impact on economic output and bank finances under three scenarios: an orderly transition, where measures to limit emissions are taking in time; a disorderly scenario, where measures are taken late; and a final “hot-house world” scenario, where things stay as they are.

The broad takeaway was that an orderly and swift transition “to minimise costs and maximise benefits outweighs short-term cost of transition to zero-carbon economy over the medium to long term”. It called a more aggressive approach to energy transition “a golden opportunity,” because the long-term advantages outweigh the initial costs.

It warned that firms located in regions most exposed to changes in weather could face severe and frequent natural disasters, which would affect their creditworthiness. Such risks are unevenly distributed in Europe, with northern regions more prone to floods and southern countries more exposed to heat stress and wildfires. And the costs of the transition would hit industries such as coal mining and electricity generation that emit large amounts of greenhouse gases — and potentially their bank creditors, whose finances would suffer if the loans or bonds aren’t paid back.

In 2050, the likelihood of corporate loan defaults would be eight per cent higher in the hot-house scenario than in an orderly transition for an average loan portfolio, but 30 per cent more likely for the most vulnerable banks.

The test had a strong focus on banks and the risk that climate change might increase credit defaults. The European economy depends on banks as the main source of finance for firms, in contrast to the United States, where financial markets play a bigger role. The climate findings will be used for a further climate stress test of banks next year by the ECB’s bank supervisory arm.

The study found that risks to bank balance sheets from the costs of transition to green energy were evenly distributed across the eurozone.

The risks of default from climate change itself, in the form of bad weather and natural disasters, were more concentrated in the banks of southern European countries such as Greece, Cyprus, Portugal, Spain and Malta. The Greek share of bank loans exposed to high physical risk, that is, the possibility that borrowers would be hit by fire or flood and not pay, was over 90 per cent. High physical risk was defined as the probability of over one per cent that a borrower would suffer such an event in any given year.