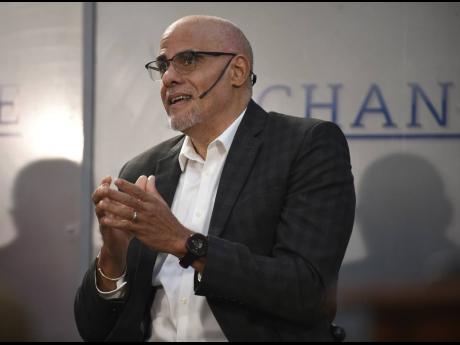 Rising inflation and high levels of vaccination reluctance among the population top the concerns of the Keith Duncan-led Economic Programme Oversight Committee (EPOC).

In an economic update on Friday, the committee noted that fiscal results are ahead of budgetary projections, led by April to July 2021 revenues, which were 10.7 per cent more than targeted and 39.4 per cent above 2020 levels for the corresponding period.

Inflation, however, at 6.1 per cent over the 12 months to August 30, 2021, remains higher than the 4.0 per cent target of the Bank of Jamaica (BOJ) and is tracking just outside the upper limit of the band in which the central bank is mandated by Government to manage price escalations in the economy.

The 12-month inflation figure is also above the 5.1 per cent for the period in 2020 and 4.1 per cent in the comparative period of 2019, according to data provided by EPOC.

The inflation trajectory is set to breach the 6.0 per cent upper limit, a scenario that the Bank of Jamaica has also predicted,but maintains that it will be a short-term phenomenon.

“We are still going to have single-digit inflation,” EPOC Chairman Keith Duncan said yesterday in response to questions about the longer-term inflation outlook.

Businesses expect inflation to hit 7.8 per cent, he said.

The concern becomes more apparent when core inflation over 12 months to August 30 is factored in. That has more than doubled to 7.8 per cent from 3.4 per cent a year earlier and tripled from 2019 levels of 2.4 per cent.

Additional economic data suggest that key drivers of economic growth are experiencing a lull, with capital spending so far this fiscal year at $20.8 billion, or 9.0 per cent below budget. Duncan noted that loans to the construction sector, which previously represented one of the few growth areas in the economy, were falling off.

The loan fall-off comes ahead of an interest rate increase that has already been signalled by the central bank that is set to raise its policy rate in a few days’ time from the current 0.5 per cent per annum as an inflation-fighting move. The rate rise is expected to trigger increases in bank loan rates that could further dampen lending.

“The MPC also signalled a possible increase in benchmark rate at its next MPC meeting due on September 30, along with implementing other measures aimed at moderating inflation expectations, including containing Jamaican dollar liquidity and seeking to ensure that movements in the exchange rate do not further threaten the inflation target,” Duncan noted.

The Jamaica dollar closed trading on Friday at $147.71 to US$1, reflecting a slight appreciation in the quarter. This followed depreciation of 1.3 per cent for the June 2021 quarter relative to the March 2021 quarter.

Duncan said that the economy continues to strengthen quarter over quarter, but the low vaccination rates and health concerns about the high number of COVID-19 cases remain concerns. Up to Friday, 715,900 doses of vaccines had been administered of which 495,140 were first doses, according to data from the Ministry of Health and Wellness. Most of the vaccines being administered require two shots.

“The third wave has left Jamaicans very traumatised and uncertain about the future and could likely impact their decisions to spend and invest. This could also contribute to slowing domestic demand and hence economic activity,” said Duncan.

Essentially, he maintained, the economy remained on track for recovery by 2023-24 with inflation being a concern.

“EPOC is satisfied that at this point in time, with all the attendant risks, our economy is on a recovery path,” Duncan reported.