France’s envoy to return to US after Macron, Biden talks 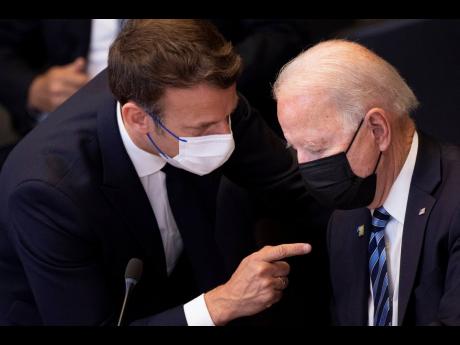 AP
AP In this June 14 file photo, US President Joe Biden, right, speaks with French President Emmanuel Macron during a plenary session at a NATO summit at NATO headquarters in Brussels.

France will send its ambassador back to Washington next week after French President Emmanuel Macron and United States President Joe Biden agreed in a phone call on Wednesday to meet next month over a submarine dispute.

The two heads of state “have decided to open a process of in-depth consultations, aimed at creating the conditions for ensuring confidence,” the Elysee and the White House said in a joint statement. Macron and Biden will meet at the end of October in Europe, the statement said.

In an unprecedented move, France recalled its ambassador after the US, Australia and Britain announced a new Indo-Pacific defence deal last week. As part of the pact, Australia will cancel a multibillion-dollar contract to buy diesel-electric French submarines and acquire US nuclear-powered vessels instead.

The French ambassador will “have intensive work with senior US officials” after his return to the United States, the statement said.

Biden and Macron agreed “that the situation would have benefited from open consultations among allies on matters of strategic interest to France and our European partners,” it said. Biden “conveyed his ongoing commitment in that regard”.

Biden reaffirmed in the statement “the strategic importance of French and European engagement in the Indo-Pacific region”.

The European Union, EU, unveiled last week a new strategy for boosting economic, political and defence ties in the vast area stretching from India and China through Japan to Southeast Asia, and eastwards past New Zealand to the Pacific.

The United States also “recognises the importance of a stronger and more capable European defence that contributes positively to transatlantic and global security and is complementary to NATO,” the statement said.

Earlier Wednesday, Macron’s office said the French president was expecting “clarifications and clear commitments” from Biden, who had requested the call.

French officials described as a “crisis of trust” last week’s announcement of the Indo-Pacific deal, with Macron being formally informed only a few hours beforehand.

Paris is calling for “acts, not words only,” Macron’s office said.

France’s European Union partners agreed on Tuesday to put the dispute at the top of the bloc’s political agenda, including at an EU summit next month.

The French presidency categorically denied a report by Britain’s Daily Telegraph newspaper, published on Wednesday, saying Macron could offer the country’s permanent seat on the UN Security Council to the European Union if the bloc backs his plans on EU defence.

British Prime Minister Boris Johnson dismissed French anger over the submarine deal, saying French officials should “get a grip”. Using both French and English words, he added they should give him a “break”.

Speaking to reporters on a visit to Washington, Johnson said the deal was “fundamentally a great step forward for global security. It’s three very like-minded allies standing shoulder to shoulder, creating a new partnership for the sharing of technology”.

“It’s not exclusive. It’s not trying to shoulder anybody out. It’s not adversarial towards China, for instance.”

The deal has widely been seen as part of American efforts to counter a more assertive China in the Indo-Pacific region.