Between rock-solid growth and hard inflation 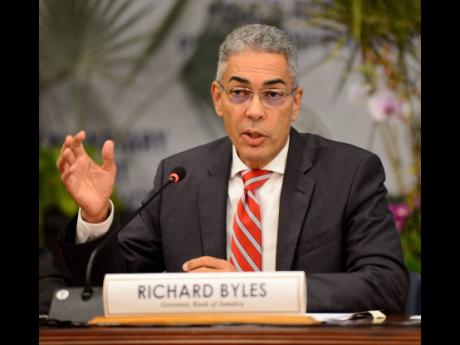 The 14.2 per cent rate of expansion in the Jamaican economy for the April to June quarter this year, as announced by the Statistical Institute of Jamaica, is being hailed by the Government as a significant achievement in the context of major shocks to the economy from disruptions caused by the COVID-19 pandemic.

But the central bank says the overperformance in economic growth is not likely to cause it the recalibrate its outlook over the medium to long term.

While the Bank of Jamaica, BOJ, revised it growth outlook to a range of 7-10 per cent for the current fiscal year ending March 2022, up from some five per cent earlier in the year, it Monetary Policy Committee, MPC, has indicated, coming out of its September 28-29 discussions, that it has anchored its growth forecast to the lower band of the range at seven per cent, in contrast to earlier optimism for growth to have been nearer to 10 per cent.

Statin said on Thursday that the fiscal year first quarter growth out-turn was the result of increases in both the services and goods-producing industries of 14.8 per cent and 12.7 per cent, respectively.

The overall 14.2 per cent growth in GDP was not enough to wipe out the more than 18 per cent contraction in the comparative 2020 period, but Minister of Finance Dr Nigel Clarke was upbeat about the June growth numbers, nonetheless.

“The scale and pace of economic growth in the first quarter of the fiscal year is good news and is very encouraging. This outcome was not a foregone conclusion as late as January of this year. In fact, this performance far exceeded general expectations and surpassed even upwardly revised projections,” Clarke told the Financial Gleaner in an interview on Friday.

He is optimistic that the growth number is a sign of early green shoots in an economy on the mend after the pandemic fallout that amounted to a 10 per cent contraction last year.

“The robust start to our economic recovery gives Jamaica the real opportunity to attain pre-COVID levels of economic output earlier than previously anticipated and most probably ahead of our peer countries. And that is what we are aiming for – a speedy economic recovery. With that aim in mind, this is certainly a most welcome start,” the finance minister said.

The parliamentary opposition, however, is not so sanguine that the 14.2 per cent growth in one quarter is enough reason to pop the champagne. Opposition spokesman on finance Julian Robinson says while high levels of economic growth is positive for the country, a welcome development, and a 14 per cent rise in output is a movement in the right direction, the economy has not yet corrected itself from the huge 18.4 per cent fall-off in the prior June 2020 quarter.

Neither can a 14 per cent by growth in one quarter, by itself, make up for the 10 per cent overall contraction last year, he said.

“While 14 per cent is good, it has to be viewed in the context of an 18 per cent decline for the corresponding quarter last year, so we were starting from a very low base in terms of the measurement of the growth for the June quarter,” Robinson told the Financial Gleaner on Friday.

Meanwhile, the shadow finance minister is taking the Bank of Jamaica to task for what he described its misguided decision to raise interest rates in an environment where persons in the productive sector are struggling to access capital to boost production so that economic growth can be sustained and ramped up to pre-COVID levels.

“I don’t agree with the decision. All the analyses show that the inflationary pressures we are experiencing are driven by factors external to Jamaica, such as global supply chain issues, international commodity prices, etc. This is cost-push inflation, not local demand-induced inflation, so raising interest rates domestically is not going to assuage those inflationary pressures. By pushing up the interest rates you are going to make the cost of borrowing more expensive, which is going to put a damper on economic growth,” Robinson said .

Finance Minister Clarke declined to comment at this time on the central bank action, noting that, as required by the revised Bank of Jamaica Act, the independent BOJ will be required to account for its policy actions in Parliament and to publish the minutes of the meeting of the monetary policy for scrutiny and proper assessment.

The central bank has conceded that its September 30 increase in the policy rate from the record low 0.5 per cent to 1.5 per cent, the first rate increase in 13 years, will “moderate” the economy’s growth potential.

“While the decision to increase the policy rate will impact growth in the short run, the bank and the MPC are concerned that if we do nothing now, and high inflation becomes entrenched, growth over the longer term will be adversely affected. Low, stable and predictable inflation is considered more important and more conducive to long-run sustainable GDP growth, wealth creation and the amelioration of poverty, than an environment of persistent high inflation,” BOJ Governor Richard Byles reasoned at his quarterly monetary policy press conference on Friday.

“We are aware that there are concerns about the impact of this policy decision on growth in the economy. The suite of policy actions beginning with the modest increase in policy rate has been calibrated to minimise the adverse impact on growth,” he said.

“BOJ’s assessment, therefore, is that even with these actions, and potential future actions, GDP growth will still fall within the range of 7-10 per cent for fiscal year 2021/2022. The BOJ is committed to fulfilling its mandate by ensuring that a growth-enabling macroeconomic environment is in place characterised by inflation returning and remaining within our inflation target range of between 4-6 per cent,” Byles added.

Annual inflation, as measured by Statin, was tracking at 6.1 per cent at the end of August.