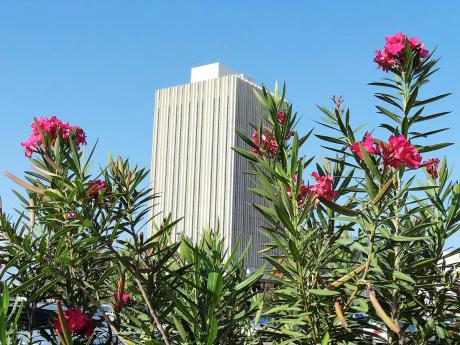 Bank of Jamaica, Nethersole Place, Kingston. The central bank on September 30 ended 13 years of interest rate cuts with a one-point hike, from 0.5 per cent to 1.5 per cent.

Amid output recovery in the June quarter and quick on the heels of the central bank's rate hike, ratings agency Standard & Poor's Global has upgraded Jamaica's economic outlook from negative to stable, while maintaining the country's speculative grade B+ long term and B short term scores for local and foreign currency instruments.

The rating reflects optimism in the global capital markets that the country is generally heading in the right economic direction, has the capacity to meet its financial commitments, but still faces ongoing uncertainties and vulnerability to adverse business, financial and economic conditions.

Among those uncertainties, the ratings firm listed the country's high debt burden, pandemic-induced fiscal deficit, vulnerability to external shocks, including foreign exchange fluctuations and weather events, as well as crime and the perception of corruption. The rating agency described crime in Jamaica as a “bottleneck” that will continue limiting the long-term pace of growth.

Despite the improved outlook, the rating agency expects Jamaica's average GDP growth to be lower than that of other countries of similar economic circumstances, constrained, it said, by structural impediments. S&P is predicting GDP growth of 3.7 per cent for calendar 2021, largely on the back of continued recovery in tourism, with the expansion accelerating to 5.5 per cent in 2022.

The Jamaican government also expects growth within a range of 7-10 per cent for fiscal year ending March 2022.

The rating review released on Monday is an improvement on the negative outlook S&P that ascribed to Jamaica in April 2020 amid the onset of the COVID-19 pandemic. Last year was the third time in a decade that Jamaica got a negative outlook rating from S&P, the other periods being 2011 and 2013.

The country has otherwise been rated stable by S&P, with positive outlooks in 2014 and 2018. The most recent outlook from competing rating agencies Moody's and Fitch was also stable.

“Jamaica has demonstrated commitment to fiscal consolidation, despite the ongoing COVID-19 pandemic, and we believe the risks for its economy and government finances have receded. In addition, the passage of the Bank of Jamaica Act revisions strengthens the central bank's monetary policy credibility,” S&P said its rating review.

It added that: “The Government's commitment to fiscal consolidation fosters macroeconomic stability – including stable inflation – and supports the country's creditworthiness. We believe the institutionalisation of fiscal consolidation policies bolsters Jamaica's policymaking stability and predictability. We also believe the recent changes in the governance and mandate of the central bank have improved Jamaica's monetary flexibility.”

S&P's opinion is likely to be taken by Bank of Jamaica, BOJ, officials as vindication of its action last week to increase the policy interest rate by one percentage point, a move which has been slammed as being “misguided” by the parliamentary Opposition and some influential business umbrella groups.

Explaining its rating review this week, S&P said: “The stable outlook reflects our view that government finances will return to a surplus position, supported by an improving economy, and that the country's high debt burden will once again begin to decline.”

The Government is, understandably, upbeat about the policy endorsement from one of the world's top rating agencies. Welcoming S&P's pronouncement, Finance Minister Dr Nigel Clarke in a statement said the positive review “is reflective of responsive yet disciplined policy choices and of institutional strengthening, even while in a pandemic. We remain committed to prudent policymaking while continuing to pursue reform with ambition.”

S&P concurs with the Government's stated outlook that the momentum of the economic recovery will continue into 2022. It also believes that the Government will “cautiously” manage public finances and repay debt to lower its debt and interest burden.

It described the Jamaican economy as being “relatively well diversified”, noting that last year's 10 per cent contraction was less than the fallout in some of the country's Caribbean peers. With the reopening of the tourism industry last summer, it observed, stopover arrivals have steadily increased, and had returned to almost 70 per cent of 2019 pre-pandemic levels by summer 2021.

The rating agency noted that Jamaica's commitment to fiscal consolidation and general economic policymaking outlook was shared by both the Government and parliamentary Opposition, and that the political commitment to the current economic path had survived changes in Government.

It said the expectation was that the Government would remain focused on pandemic-related health and social measures, while maintaining its commitment to fiscal consolidation, which would foster macroeconomic stability.

A spike in the Government's debt stock is not expected to go unresolved and the agency said it expected Government to take action to the “stabilise” the debt increase. The high level of foreign currency-denominated debt, however, it pointed out, leaves the country exposed to exchange rate fluctuations.

S&P is less concerned about the current fiscal deficit, conceding that the pandemic had interrupted three years of fiscal surpluses in Jamaica and that the country's pandemic-related spending on social and health measures and a fall in revenues accounted for the deficit.

As to new borrowings: “We expect (the Government) will seek to refinance external maturities through domestic funding, to the extent that the private sector is not crowded out,” the rating agency said.