Official pledges US help for Haiti on migration, stability 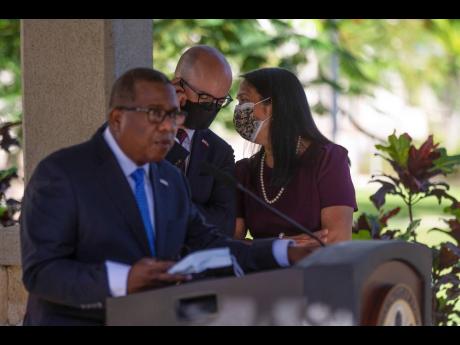 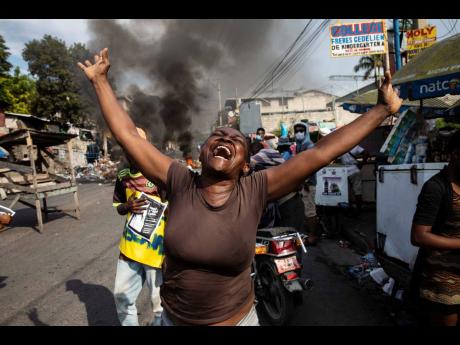 AP
A woman shouts anti-government slogans during a protest organised by friends and relatives of Biana Velizaire, who was kidnapped and held for several days by gang members, in Port-au-Prince, Haiti, Monday, September 27, 2021.
1
2

The number of United States-bound Haitian migrants temporarily stuck in northern Colombia has risen to about 20,000, a senior US official said on Thursday, echoing reports from a local human-rights organisation.

“It’s forming a human bottleneck,” said the official, who briefed reporters on condition he not be named.

Earlier this week, Colombia’s Office for the Defense of the People said 15,000 to 20,000 migrants — overwhelmingly Haitians – were stuck in the Colombian city of Necocli awaiting ferries that would take them across the Gulf of Uraba to a point where they can start the perilous jungle trek across the roadless Darien Gap into Panama.

Colombian and Panamanian officials have tried to limit the number of migrants to 500 a day on the ferries, but more than that have been arriving daily, on average.

Yet their chances of entering the US are limited as well, even if they manage to make their way across Central America and Mexico, where thousands of other Haitians are now stuck, many waiting months for some sort of permission to live and work.

The US expelled more than 7,000 Haitian migrants to Haiti aboard 65 flights from September 19 through October 3, according to the US Department of Homeland Security. The expulsions to a devastated nation many left years ago have received sharp criticism and prompted the resignation of Daniel Foote, the Biden administration’s special envoy to Haiti.

“The challenges on the migration front are very significant,” the administration official said. “These are very tough decisions.”

Foote, who has called the large-scale deportations “inhumane”, said in a US congressional briefing on Thursday that use of expulsions “in the short term is not going to make Haiti more stable. In fact, it’s going to make it worse”.

He said he was never asked about them and found out they were occurring through news reports.

“Haiti as a country and its government cannot support the people it has there right now,” he said. “There’s no safety net. It’s just a recipe for human tragedy.”

As the US continues to expel Haitian migrants, the senior official said that the US government would like regional conversations with countries affected by the ongoing migration in hopes of creating a collaborative approach.

The official did not elaborate on what that might entail. The Biden administration has been talking with governments across the region on ways to discourage migration — particularly after last month’s crises in Del Rio, Texas, where thousands of Haitians had massed beneath a bridge before the encampment was broken up.

Mexico has been cooperating with the US by trying to contain migrants in the southern part of the country and expelling migrants from other countries to Guatemala. On Wednesday, it flew 129 Haitian migrants from the southern Mexican city of Tapachula to Port-au-Prince, Haiti’s capital.

The administration has been slammed from the right for not taking a tougher stand at the border and from the other side for repatriating Haitians to a homeland that is now facing a deep economic crisis, a spike in gang-related violence, and great political instability following the July 7 assassination of President Jovenel Moïse.

Foote, the former US special envoy to Haiti, noted that US diplomats cannot leave their compound in Port-au-Prince without an armed guard.

“The gangs run Port-au-Prince. It is in their control,” he said. “They are better equipped and better armed than the police.”

The US senior administration official also acknowledged Haiti’s security situation: “It is often known that gangs have links to political and private-sector actors.”

The hemisphere’s poorest country also is trying to recover from a magnitude 7.2 earthquake in mid-August that killed more than 2,200 people while destroying or damaging tens of thousands of homes.

Years of political stalemate have left the country with a barely functional government, Legislature, and courts — a situation that makes next year’s presidential and legislative elections especially crucial.

The official said the US wants to help create conditions so that Haitians can vote freely, fairly, and safely and said it will support a “broad-based dialogue” to arrive at a political accord to prevent further instability.

But he said the future would have to be determined by Haitians: “There is going to be no political solution that is going to be prescribed by Washington.”