In Chile, Haitians grow weary of waiting, eye journey to US 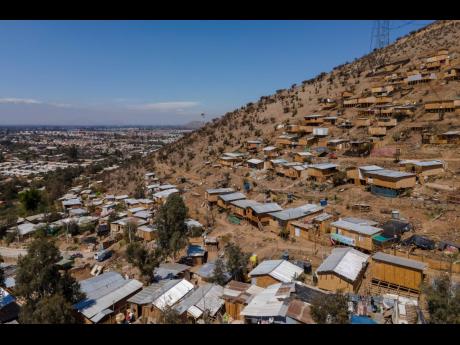 AP
These homes stand on the side of a hill in an unpaved area named ‘Bosque Hermoso’, or Beautiful Forest, where migrants from Haiti, Peru and Colombian settled in Lampa, Chile, on Friday, October 1.

Pierre, a 37-year-old Haitian, says not a day goes by in which he doesn’t think of leaving Chile, like the multitudes who have grown frustrated and headed north towards the United States.

He feels caught in a vicious circle: He was laid off three months ago and can’t get a new job without a valid identity card, but he can’t get his card renewed without an employment contract.

The government of President Sebastián Piñera has been tightening laws on migrants, and Pierre — who declined to give his last name because he didn’t want to put his residency bid at risk — said it seems to be acting “so that we Haitians get tired of the country”.

Tens of thousands of Haitians came to Chile in recent years, fleeing disasters and poverty while taking advantage of relaxed visa rules and a booming economy in Chile. But a tighter job market and newly imposed bureaucratic barriers have led many to seek better opportunities in the US, despite a crackdown that followed the appearance of a border camp holding more than 14,000 people in Del Rio, Texas.

Few appear inclined to head back to Haiti itself, where poverty and violence have grown even worse since they left.

More than 10,000 Haitians have been expelled from several countries to their homeland since September 19 – more than 7,600 of those from the United States alone – according to the UN International Organization for Migration.

Thousands are still on the long road north — many stuck at migration bottlenecks in northern Colombia and southern Mexico.

Many had arrived on tourist visas before 2018, when Chile’s centre-right government issued a decree requiring that Haitians get a visa before travelling to Chile. In April, it enacted a new law that seeks to prevent the irregular entry of foreigners and makes expulsions easier.

“We are putting our house in order,” Piñera said.

The government has set a Monday deadline for them to regularise their status or face potential expulsion – though it hasn’t specified what steps it will take. It already expelled several hundred migrants – including dozens of Haitians – on flights to their homelands.

Many, like Pierre, say it’s impossible to comply. For example, Chile requires them to provide a document certifying a Haitian government background check – but it can take months at best to get such papers from the Caribbean nation’s government.

Pierre, who is married and whose locally born daughter is a Chilean citizen, said he has been trying to update his residency permission for two years and is only about halfway through the process.

“I spent about four years working in a company and I am still irregular in the country,” he said.

Pierre lives in the Dignidad camp, southeast of the capital of Santiago, in a cluster of small, wooden houses along dirt streets devoid of greenery. He rarely leaves his tiny house, hoping someone he knows will come by to offer him temporary work.

He has a motorcycle parked outside, but can’t use it because he does not have a driver’s licence, which he cannot get without an identity card.

Magdaline Afred, a Haitian with permanent residence, says many of her compatriots left Chile as “they cannot work, because they do not have papers”.

“It makes me very sad, because many left (for the US) with their children who were born here ... and now they are deporting Haitians with Chilean children,” she said.

Lyné Francois, a Haitian social worker and community leader, said, “There are people who have had their papers rejected two or three times and they are bored, desperate, exhausted and they are leaving.

“We think the government could make things easier, especially because of the earthquake; people don’t know what to do,” she added, referring to a major earthquake that hit Haiti in August, causing further hardships there.