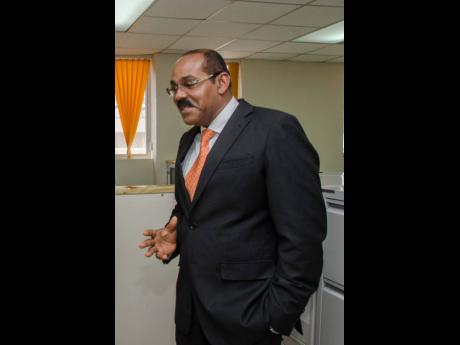 P rime Minister Gaston Browne is urging two local banks to move to acquire the Antigua & Barbuda operations of CIBC FirstCaribbean International Bank, FCIB, after a consortium of banks in the Eastern Caribbean Currency Union announced last week that it had entered into a definitive agreement to acquire the branches and banking operations of the bank.

CIBC FirstCaribbean was formed in 2002 with the merger of the CIBC West Indies Holdings and the Barclays Bank PLC Caribbean operations. In December 2006, CIBC acquired Barclays stake and became the majority shareholder in FirstCaribbean.

Browne said that the Eastern Caribbean Amalgamated Bank, ECAB, and the Antigua Commercial Bank should consider a bid for FCIB operations here and should seek to prevent the bank selling its assets to a foreign entity.

“My understanding is that the four smaller branches within the OECS subregions, they have deals on these four branches. They do not have a deal on the branches in St Lucia or Antigua. But one can speculate that they will sell the Antiguan and St Lucian banks,” Browne said, adding that the ECAB and the Antigua Commercial Bank are the only two local entities capable of purchasing the local assets of FCIB.

“Our indigenous banks need to ready themselves for a possible acquisition ... I am hoping that the management of these two banks are proactive enough to get on to the leadership of CIBC to start the negotiations, and not to allow some external institution to start those negotiations,” he said.

“So before some other institution comes forward, I want to implore our bankers here ... even if they have to do a joint venture, they should approach the directors of CIBC Caribbean as soon as possible and should try and do a deal, “ the PM said.

Getting the bank assets into local hands, he added, would ensure that the profits are retained in Antigua, which can be utilised for the country’s development.

A statement issued by the consortium noted that the acquisition would serve to expand the members’ combined loan base by more than EC$600 million and deposits by EC$1.5 billion, and provide them with additional scale to better serve their various client base and communities.

Until regulatory approvals are obtained and the transaction closes, operations at all institutions will continue as they currently do, the group said.

As at June 2021, the consortium members’ aggregate deposit base was EC$6.4 billion, which the group said gave them 53 per cent market share across their combined markets.