Confidence declines amid health worries, even as jobs return 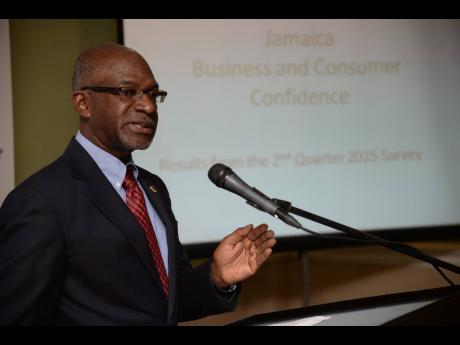 Consumer and business confidence fell in the September quarter due to recurring COVID-19 fears surrounding personal health and the economy.

Consumer confidence fell 13.8 per cent and business confidence declined 7.0 per cent, respectively, relative to the June quarter, according to new data released on Tuesday.

“Consumers are reflecting a similar degree of pessimism showed by businesses,” said Don Anderson, managing director of Market Research Services, whose firm conducts the confidence surveys on behalf of the Jamaica Chamber of Commerce.

The indices had risen in the June quarter as vaccinations increased. Confidence waned, however, amid the rising wave of COVID-19 cases during the summer months of the survey. Anderson said that participants were naturally concerned about the virus and their ability to continue earning.

“That’s a dramatic fall-off in consumer confidence,” said Anderson. “They expect the economy to get tougher,” he said.

Despite worsening economic prospects, consumers think jobs will be more readily available. This reflects increased activity in the silo sectors such as construction, even amid a wider economic downturn.

“It is interesting; almost a dilemma faced by consumers,” he said of the expectations of a worsening economy but more jobs. The unemployment rate fell to 12.6 per cent at one point during the pandemic, but new jobs are now being created, including more than 93,000 in the July quarter.

On a cash basis, remittance inflows have largely been rising, and could set a new record this year. Year to date, inflows are up 24 per cent to US$2.38 billion as of August, compared to US$1.92 billion in the comparative eight-month period in 2020.

However, that there might be a reduction in the number of households that benefit from remittances concerns Anderson, who sees it as potentially affecting future sentiment.

“The earlier we can get this pandemic under control, the better the situation will evolve,” Anderson said.

John Mahfood, president of the Jamaica Manufacturers and Exporters Association, JMEA, said at the release of the indices that inflation remains a concern for businesses. He noted, however, that exports from Jamaica to the Caribbean are now virtually on par with anywhere in the world. That’s because it costs about US$500 more to ship products from outside the region to the Caribbean than from within the region.

Mahfood, who is also the CEO of tea maker Jamaican Teas Limited, said the cost of freight is now so high to Jamaica for a 20-foot shipping container at US$13,000, up from US$2,000 prior to the pandemic, and even more from Asia to the United States, it has created opportunities for Jamaica, whose goods can be shipped to its Caribbean neighbours more cheaply than imports from other regions.

“Jamaica now has a small competitive advantage in items produced here, and that can be shipped to other Caribbean nations,” he said, explaining that freight from Jamaica to the Caribbean cost some US$1,500 versus China to the Caribbean, which ranges from US$1,500 to US$2,000.

“Companies in Jamaica now are seeing that they can export competitively in the Eastern Caribbean, because their products can compete with those from the Far East. I do not know how long it will last, but that is a current pivot,” the JMEA president said.