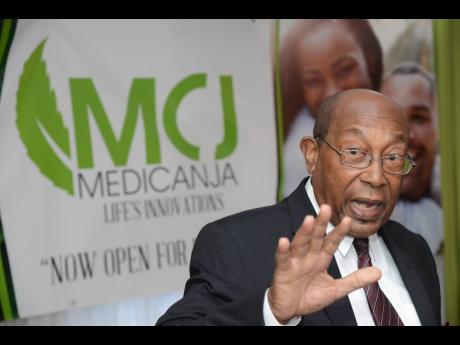 The US$15 million ($2.3 billion) shot in the arm announced Tuesday is just what cannabis research and production outfit Medicanja needs to chart a direct course to growth, according to Chairman Dr Henry Lowe.

The cannabis company is now being backed by a private equity investor, Noble Capital, an ‘ESG’ fund headquartered in New York that weighs environmental, social and governance factors in its investment decisions.

Noble Capital Fund director Sylvester Gbewonyo says the deal with Medicanja Limited was struck after more than two years of negotiation, and that the cannabis company will have a new eight-member board, with Lowe, 82, as chairman.

The size of the stake acquired by Noble through the US$15 million injection was not disclosed. Lowe retains 35 per cent of the company, but Noble, which is not the only new investor in Medicanja, declined to say how much of the remaining 65 is in its possession.

“Dr Lowe and our fund have been going back and forth for the past two and a half years, exploring ways that we could help. We think he and his work are integral to developing the cannabis industry,” Gbewonyo told the Financial Gleaner ahead of the announcement on Tuesday.

Medicanja will be at least the second deal struck by Noble Capital in relation to Jamaica. Gbewonyo, a Wall Street investment banker for over 20 years, who is married to a Jamaican, says his firm is also backing Old Reid Rum, a Jamaican overproof rum brand acquired by entrepreneur Wes Campbell in 2018. The re-emerging product, produced at the distillery at Innswood, St Catherine, is presently being marketed mostly on the US west coast, particularly California. Its reintroduction to the Jamaican market is next.

The expansion programme also includes plans for setting up a special economic zone that will not only house Old Reid Rum but also Bio-Tech, the UWI-affiliated research partner of Medicanja.

“We want to house the whole operation to be in one place, from cultivation to extraction. We’re taking that strategic step so that we can ensure maintenance of quality from the onset,” Gbewonyo said, adding that the facility will be primarily focused on producing products with CBD or cannabidiol, the therapeutic group of products that can be extracted from ganja. The other set of products are a psychoactive group of compounds, THC, or tetrahydrocannabinol, which is not the focus of the company at this time, he said.

Gbewonyo says over the next three years the investment in the complex may go to as much as US$100 million.

The deal covering the capital injection in Medicanja was finalised shortly after consultant Dr Trevor Hamilton joined the cannabis company back in May. Company records show that he was added as a director of Medicanja in July 2021.

Hamilton told the Financial Gleaner that he has taken over as interim CEO of Medicanja. Hamilton has not disclosed how much he invested in Medicanja but said his and Noble Capital’s holdings form a majority stake.

“Our aim is to make Medicanja the catalyst for the industry though the various connections. We want to continue to be the leader in cannabis health and wellness-based solutions,” he said.

Medicanja was founded in 2013 by scientist and entrepreneur Dr Henry Lowe, who first unveiled various medical marijuana products that the company intended to commercialise back in 2014. However, Medicanja has been hamstrung by banking roadblocks, limiting its ability to make and receive payments. The onset and effects of the COVID-19 pandemic has also served to slow down the company’s progress, according to Lowe.

Lowe confirmed that he retains 35 per cent of the company under the new arrangement, saying having new investors on board would give him a greater level of freedom to concentrate on the business.

“I want to just concentrate on my drugs research. At this stage of the game I don’t want to be stretching myself too thin,” he said.

Gbewonyo says the new capital injection will also drive a new marketing programme targeting 12 countries in North America, the Caribbean, Europe and Africa, and centred around products for prostate cancer, diabetes and epilepsy, as well as men’s and women’s overall health.

“We believe that these are products that should be available globally and we’re making every effort to provide resources and supplying demand,” the Noble Capital director said.

Medicanja will start marketing five products, but expects to add to the portfolio over time as the 40 patents held by Lowe are commercialised.

“We will start by getting a foothold for the brand and when we get there we will supply the products that the market is asking for,” Gbewonyo said.