UK budget to mark shift away from pandemic firefighting 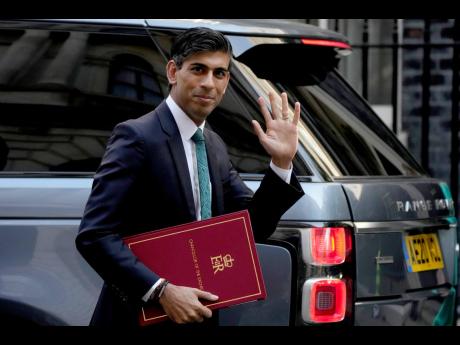 The United Kingdom has experienced a series of shortages these past few months, from a lack of fuel at gas stations to not enough workers picking the fall harvest, but Treasury chief Rishi Sunak is unlikely to dwell on them when he delivers his annual budget statement today, Wednesday.

The Chancellor of the Exchequer, as he is formally known, will instead likely use one of the most high-profile, choreographed events in the country’s political calendar to paint a relatively rosy picture of the state of the British economy following the devastating shock of the pandemic.

With government borrowing less than anticipated a few months ago – following a fairly solid recovery from Britain’s deepest recession in around 300 years – Sunak has a bit of wiggle room on the taxes and spending front.

However, with the next general election not due until 2024 at the latest, Sunak is not expected to turn into Father Christmas – big tax giveaways in Britain are traditionally timed for the run-up to a general election.

Sunak’s overall focus on Wednesday is expected to be stabilising public finances following the battering they took during the pandemic, which saw the Conservative government respond with an arsenal of support measures for workers and businesses. Tax increases on business profits and people’s incomes have already been announced to get borrowing to more sustainable levels over coming years.

With many of the pandemic-related firefighting measures, such as a salary support scheme, now finished, Sunak is expected to flesh out the funding arrangements of the long-term priorities of his boss, Prime Minister Boris Johnson, notably his ambition to “level up” the UK – that means spreading prosperity beyond the wealthy south that is the traditional Conservative heartland.

“Although the COVID-19 crisis is far from over and still presents a serious risk to the outlook, the economy is recovering strongly and the urgent need for emergency fiscal policy support has subsided,” said Kallum Pickering, a senior economist at Berenberg Bank.

“Sunak can thus focus on the government’s longer run economic objective – to lift UK growth potential by ‘levelling up’ laggard regions,” he added.

When he emerges from his office at 11 Downing Street on Wednesday, Sunak will hold up his red budget box that contains the speech that he will give to parliament. But many of his proposals have already been revealed, much to the fury of the Speaker of the House of Commons, Lindsay Hoyle.

“At one time ministers did the right thing if they briefed before a budget – they walked,” Hoyle told lawmakers on Monday.

Sunak has already announced that the minimum wage for low-income workers will go up by an inflation-busting 6.6 per cent beginning in April and that the public sector pay freeze for military personnel, police officers and teachers will end.

Given that inflation is set to rise further in the coming months, potentially to over 5.0 per cent, there are concerns as to whether the pay increases will be enough to keep track with inflation.

“That means a pay rise for all public sector workers that at least matches the cost of living,” said Frances O’Grady, general secretary of the umbrella Trades Union Congress. “If Rishi Sunak does not increase department budgets, the pay freeze will be over in name only.”

Business executives have expressed concerns about the planned increase in the minimum wage, given that they are already set to pay more taxes over the coming years at a time when they are still trying to recoup the losses generated by the pandemic and deal with current rising costs.

One perk of delivering the budget is that the Chancellor –alone – may drink alcohol. It’s the only time of the year that anyone in the House of Commons can do so. Sunak, however, does not drink, so he won’t be indulging in that tradition, though anything he says on the taxes he will impose on alcoholic drinks will be keenly noted in pubs up and down the land.