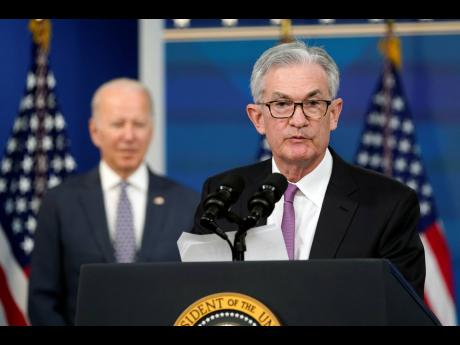 AP
Federal Reserve Chairman Jerome Powell speaks after President Joe Biden announced his nomination for a second four-year term as Federal Reserve chair, during an event in the South Court Auditorium on the White House complex in Washington, Monday, November 22, 2021.

President of the United States Joe Biden said Monday he is nominating Jerome Powell for a second four-year term as Federal Reserve chair, endorsing his stewardship of the economy through a brutal pandemic recession in which the Fed’s ultra-low rate policies helped bolster confidence and revitalise the job market.

Biden also said he would nominate as vice chair Lael Brainard, the lone Democrat on the Fed’s Board of Governors and the preferred alternative to Powell among many progressives.

His decision strikes a note of continuity and bipartisanship at a time when surging inflation is burdening households and raising risks to the economy’s recovery. In backing Powell, a Republican who was elevated to his post by President Donald Trump, Biden brushed aside complaints from progressives that the Fed has weakened bank regulation and has been slow to take account of climate change in its supervision of banks.

“When our country was haemorrhaging jobs last year, and there was panic in our financial markets, Jay’s steady and decisive leadership helped to stabilise markets and put our economy on track to a robust recovery,” Biden said, using Powell’s nickname.

In a second term that begins in February, Powell would face a difficult and high-risk balancing act: Inflation has reached a three-decade high, causing hardships for millions of families, clouding the recovery and undercutting the Fed’s mandate to keep prices stable. But with the economy still four million-plus jobs shy of its pre-pandemic level, the Fed has yet to meet its other mandate of maximising employment.

Next year, the Fed is widely expected to begin raising its benchmark interest rate, with financial markets pricing in at least two increases. If it moves too slowly to raise rates, inflation may accelerate further and force the central bank to take more draconian steps later to rein it in, potentially causing a recession. Yet if the Fed hikes rates too quickly, it could choke off hiring and the recovery.

If confirmed, Powell would remain one of the world’s most powerful economic officials. By either raising or lowering its short-term interest rate, the Fed seeks to either cool or stimulate growth and hiring, and to keep prices stable. Its efforts to direct the US economy, the largest in the world, typically have global consequences.

The Fed’s benchmark rate, which has been pegged near zero since the pandemic hammered the economy in March 2020, influences a wide range of consumer and business borrowing costs, including for mortgages and credit cards. The Fed also oversees the nation’s largest banks.

For months Powell was the favourite to be reappointed, but a vigorous campaign by environmental and public interest groups in support of Brainard clouded the picture in recent weeks. Critics, including Senator Elizabeth Warren, D-Massachusetts, argued Powell had loosened bank regulations that were put in place after the 2008-2009 financial crisis.

And two other senators expressed opposition to Powell last week because they said he was insufficiently committed to using the Fed’s regulatory tools to combat global warming.

Brainard, meanwhile, cast 20 dissenting votes against financial rule changes in the past four years. In March 2020, she opposed a regulatory change that she said would reduce the amount of reserves large banks were required to hold to guard against losses. She has also spoken more forcefully than Powell on ways the Fed can confront global warming.

Biden sought to assuage those concerns. He said Powell had committed to making climate change “a top priority” and had agreed to make sure “that our financial regulations are staying ahead of emerging risks.”

“Jay, along with the other members of the Fed Board that I will nominate must ensure that we never again expose our economy and American families to those kinds of risks,” he said at the White House, referring to the 2008 financial crisis.

Biden still has the opportunity to fill three more positions on the Fed’s board of governors, including the vice chair for supervision, a top bank regulatory post. Those positions will be filled in early December, he said.

Biden acknowledged that some Democrats encouraged him to pick a new Fed chair, for a “fresh start.” But he said he wanted to go in a different direction.

“We need stability and independence at the Federal Reserve,” he said. “I believe Fed leadership with broad and bipartisan is important, especially now, in such a politically divided nation.”