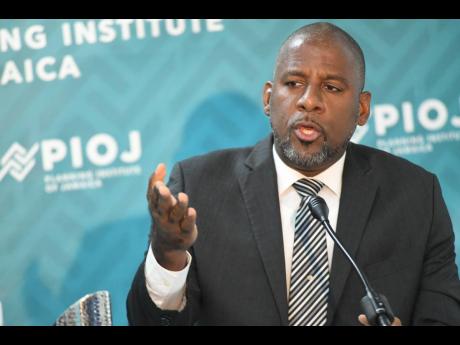 T he Jamaican economy grew 6.3 per cent for the July-September 2021 quarter relative to the similar quarter in 2020, reflecting continued recovery in most sectors, except mining, preliminary growth estimates from the Planning Institute of Jamaica, PIOJ, show.

The mining sector, which declined 31 per cent due to an August 22 fire at the Jamalco alumina plant, will likely remain a drag on future gross domestic product, GDP, expansion well into 2022, the Planning Institute indicated.

“We anticipate the reopening of Jamalco next year,” said PIOJ Director General Dr Wayne Henry at his quarterly briefing on the economy on Wednesday.

“The fortune of the sector will not turn around until the reopening of the closed plant,” Stewart said.

The fire damaged the alumina refinery’s power station, resulting in production being curtailed. Jamalco’s majority owner, Hong Kong-based Noble Group, expects to spend $3 billion, initially, just to get the refinery back to half-capacity by next June.

Jamalco expects to return to full capacity by September 2022, but it requires the use of two silo digesters and renting of gas turbines to improve the power plant’s reliability.

Alumina production at Jamalco totalled 1,143 kilo tonnes in 2020, which was flat relative to the previous year. It’s the largest of three-alumina producing refineries, the others being Chinese owned Alpart and Russian-owned Windalco.

Alumina production suffered heavy declines in 2020 due to pandemic restrictions. Together the three refineries accounted for 1,621 kilo tonnes valued at US$439 million in export earnings, down from 2,173 kilo tonnes in 2019, which earned US$718.5 million, according to PIOJ data.

Statin date indicates that alumina production is currently tracking 14 per cent below comparative nine-month 2020 levels, and 41 per cent below 2019 levels, but the contribution of the respective refineries to overall output is unknown.

The mining sector’s current misfortune notwithstanding, the coronavirus pandemic is still the biggest headwind.

“The resurgence of COVID-19 and the reimposition of public health and safety measures remain the main downside risk to growth,” said Henry.

In alignment with Jamaica’s own forecasts, the International Monetary Fund, IMF, predicted last week that the Jamaican economy would grow 8.25 per cent for fiscal year 2021-22. On the heels of that release, Moody’s this week affirmed Jamaica’s long-term issuer and senior unsecured debt ratings at B2, with a ‘stable’ outlook.

The IMF further predicts growth of 3.5 per cent for Jamaica in FY2023, but warns of significant risk. If both forecasts hold, Jamaica would have reversed the 11 per cent contraction, experienced in the apex period of the pandemic, by March 2023.

Henry, however, is forecasting full recovery in fiscal year 2023-24. He expects a quicker turnaround on jobs, saying employment should regain its pre-COVID level in fiscal year 2022-23; that is, by March 2023.

“It should be noted, however, that the longer it takes for the economy to recover, the more likely there will be economic scarring; that is, permanent closure of businesses, where the most vulnerable will be disproportionately impacted,” he warned.

He also said at his briefing on Wednesday that the pace of recovery would depend on Jamaicans observing safety and public health protocols, and working together to reduce the impact of COVID-19 on the economy. The IMF, too, cites COVID as the main risk.

The factors that led to growth in the latest quarter were the relaxation of COVID-19-containment measures globally, which facilitated increased domestic and external demand, resulting in a general uptick in economic activity.

PIOJ’s growth projections are an initial estimate. The final official growth figures are reported by the Statistical Institute of Jamaica. Typically, the forecasts are closely aligned, but have widened since the pandemic. Henry said variations between both state agencies are enlarged during times of shocks, for example, the COVID health crisis.

“The variation between PIOJ’s estimate and Statin’s subsequent estimate is likely to be outside the usual band, both at the industry level as well as the overall growth out-turn,” he said.

For the July-September quarter, the goods-producing sector grew by 2.8 per cent, due to an improved performance in three of the four industries, namely, agriculture, manufacture and construction. The services sector increased by 7.3 per cent relative to the corresponding quarter of the previous year, reflecting some recover in the tourism industry and higher real value added for all industries.

Drilling down into the various industries, real value added for the agriculture, forestry and fishing industry grew 7.2 per cent. Manufacture grew 8.5 per cent, as the stand-out goods sector.

In the services sector, the stand-out industry included transport, storage and communications, up 9.0 per cent, mainly due to increasing travel.

Finance and insurance services grew 3.0 per cent due to the widespread economic recovery that resulted in an increased demand for working capital to upgrade equipment and purchase inventory.

The construction industry cooled in the quarter, growing at a slower 1.7 per cent pace when compared with previous quarters. However, the PIOJ expects construction to regain momentum and is forecasting 5.0 per cent growth for the 2022 fiscal year.

So far this year, January-September, the PIOJ estimates that the economy grew 4.0 per cent in the nine-month period.

The Jamaican Government expects growth within a range of 6.0 per cent to 9.0 per cent for year ending March 2022.