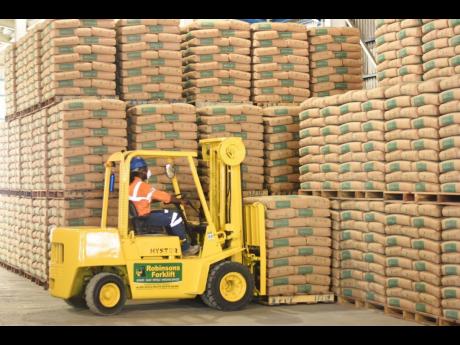 Pallets of Carib Cement being stacked at Caribbean Cement’s plant in Rockfort, Kingston.

Caribbean Cement Company Limited appears to see the royalty payment to Cemex partly as payback, noting that for five years it has benefited from the intellectual property and internal systems of its Mexican parent Cemex for which is received value...

Caribbean Cement Company Limited appears to see the royalty payment to Cemex partly as payback, noting that for five years it has benefited from the intellectual property and internal systems of its Mexican parent Cemex for which is received value free of cost.

“Cemex has developed a portfolio of IP that is licensed to all operations of Cemex around the world,” said the company in an expanded market filing on Tuesday, December 7.

“These initiatives and best practices have been selected as Cemex’s standard because their value has been demonstrated in certain of Cemex’s global operations, including Caribbean Cement since 2017, primarily in the form of increased efficiencies and other cost savings,” the Kingston-based cement maker said.

Shareholders will vote on whether to allow Caribbean Cement to pay out royalties to Cemex, amounting to as much as 4.0 per cent of its total sales, equating to around $800 million to $1 billion a year based on its current sales income. Approval of the arrangement is a near certainty given that Cemex controls 79 per cent of the Caribbean Cement. A similar arrangement was approved in September by shareholders of Trinidad Cement Limited, which is a subsidiary of Cemex and direct parent company for Caribbean Cement.

The IP portfolio is constituted of a set of standardised technologies, procedures, systems, and processes that are uniformly applied across all of Cemex’s global operations. Cemex stated that it entered into similar agreements with its affiliates in other regions with “comparable fees”, including companies that are publicly listed in Colombia and in the Philippines.

Local investment company VM Wealth Management, in its analysis of the proposed royalty fees to Cemex, said minority owners of the company are unlikely to affect the outcome of the vote, but also told the Financial Gleaner that it expects the Jamaican cement maker to continue turning a profit under the arrangement.

“As such, minority shareholders will have to be vigilant and pay close attention to the development of the new dividend policy that is to be established by the recently approved Dividend Policy Committee,” said Research Analyst Sharif Small. “Notwithstanding, we believe that the company has a sound business model and is likely to continue generating profits in the foreseeable future,” he said.

Caribbean Cement has not paid a dividend for years, but having returned to profitability after a period of sustained losses and the recent restructuring of its debt, the company announced this year it was weighing the introduction of a new dividend policy.

“If the intended royalties are expensed on the income statement, this means that Caribbean Cement would have a lower taxable income. However, this would also mean that Caribbean Cement would now have less profits available for distribution to shareholders by way of dividends while Cemex extracts cash from the business by way of royalty fees,” the VM Wealth analyst said.

Managing Director of Caribbean Cement Company Limited, Yago Castro, declined to comment, referring the Financial Gleaner instead back to the expanded market filing.

The document indicates that the 4.0 per cent royalty reflects analysis performed by Economic Partners LLC, an independent transfer pricing and business valuation firm in the United States; and that the valuator “has confirmed that the methodology used to define the 4.0 per cent fee complies with market practices”.

Caribbean Cement said the fee was initially to be voted on in 2020, but was delayed by the COVID-19 pandemic. The fee is scheduled for implementation in January.