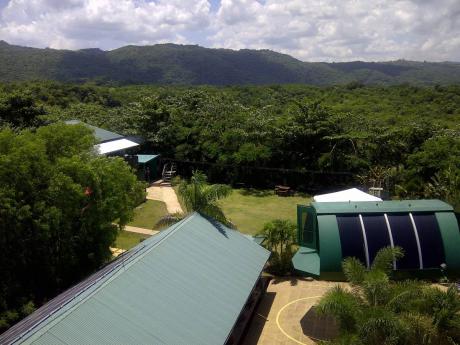 Overhead view of a section of the Mystic Mountain complex in Ocho Rios.

One year after creditors called their investment for non-payment of bond interest, the takeover of the assets of indebted attractions owner and operator Mystic Mountain Limited, MML, was averted on Tuesday when a ruling was handed down in the...

One year after creditors called their investment for non-payment of bond interest, the takeover of the assets of indebted attractions owner and operator Mystic Mountain Limited, MML, was averted on Tuesday when a ruling was handed down in the Supreme Court voiding an August 9, 2021 meeting with representatives of the company’s sole secured creditor, Sky-High Holdings Limited.

At that meeting, Sky-High voted to reject a secured creditor payout proposal from MML for the phased payment between December 2021 and June 2022 of $1.1 billion, representing interest and principal on secured bonds that became due and payable when the bondholder, through its trustee JCSD Trustee Services Limited, issued a demand notice in January last year after MML missed interest payments in September 2020 and again in December 2020, when interest and partial principal payments were due.

The legitimacy of the August meeting and vote, whether unsecured creditors should have been invited to the meeting, as well as the voting rights of those unsecured creditors, were all matters put to the court for a determination.

Handing down his written judgment on January 18 as promised after submissions were heard on December 2 and 3 last year, Justice David Batts ruled to strike out the meeting and vote on the grounds that under Jamaica’s insolvency law, all classes of creditors ought to have been invited to the meeting and allowed to vote on the proposal, even though the payment plan was addressed to only secured creditors.

Financial disclosures by MML in July last year indicated that the unsecured creditors included Sygnus Capital, German businessman Josef Wiegand, who were owed US$3 million, as well as the Government of Jamaica and workers at the Mystic Mountain attraction in Ocho Rios. The government and workers were said to have been owed at the time US$872,000 in taxes, employer’s statutory contributions, redundancy and severance pay.

A new meeting has been ordered by the court for 21 days from Tuesday, to have a rerun of the creditors’ deliberation and vote on MML’s payment proposal. The ruling also okayed the attendance and involvement in the meeting of the supervisor of insolvency and government trustee, retired Supreme Court judge Ferdinand Smith, a matter that was challenged by lawyers for Sky-High Holdings. The August 9 meeting had been aborted after Smith raised questions about the non-inclusion of unsecured creditors, and suggested that MML-appointed trustee Caydion Campbell of Phoenix Restructuring Advisory & Insolvency Services Enterprise apply to the Supreme Court for guidance.

The October 6, 2021 court filing by Campbell was combined with an earlier suit by Sky-High filed on September 23, 2021, that asked the court to order that the August 9 ‘no’ vote automatically lifted a statutorily-imposed stay on the secured creditor moving to take control of MML’s assets to realise its debt. The stay had been triggered by MML’s notice to the Office of the Supervisor of Insolvency in February 2021 that it intended to make a proposal for the settlement of the debt.

With the quashing of the creditors’ meeting and vote, the court denied Sky-High’s request for an order confirming the lifting of the stay that would have resulted effectively in a takeover of the assets of MML, including the operations of the Mystic Mountain attraction.

The directors of Sky-High Holdings include businessmen Ian Haynes and Adam Stewart.

“By its ruling, the court has clarified that the purpose of all classes of creditors attending a meeting to consider a proposal made only to a specific class of creditors is to allow all creditors to be heard and to understand the details of that proposal,” said Haynes in comments to the Financial Gleaner.

“We are grateful for the court’s significant clarification that the ability of secured creditors as a class to determine whether to accept or reject a proposal made only to them, and to realise their security cannot be eroded because unsecured creditors, with other motivations, might find it convenient to have realisation of security postponed,” he added. “Even if the insolvent company goes into bankruptcy (for example) a secured creditor may proceed to realise its security. This recognition by the court will no doubt strengthen the confidence of lenders in the effectiveness of the provisions of the Insolvency Act that protect the rights of secured creditors.”

The ruling indicates the judge was not persuaded by arguments made by Sky-High lawyer Allan Wood QC of the law firm Patterson Mair Hamilton that the court does not have the power to override the vote of the secured creditor to reject the proposal. The court also disagreed with assertions by Wood that there was no basis in law for the trustee to make a new verbal offer at the meeting.

The payout terms contained in the written proposal, which, in July 2021, had been filed with the Office of Insolvency and deposited at the Companies Office, according to the stipulations of the Insolvency Act of 2014, were amended verbally by Campbell in the August 9 meeting after it emerged that a potential bank loan on which MML had been relying to make full payments by August 2021 did not materialise.

In the creditors’ meeting now set for March, the position of Sky-High is likely to remain unchanged on the issue of accepting any phased payout proposal, but MML would have bought itself additional time as it has been doing by utilising the available legal bankruptcy protection from the expiration of the bondholder’s ultimatum in February last year.

MML’s parent company is Karibukai Limited, which in turn is majority-owned by Rainforest Adventure Holdings Limited.