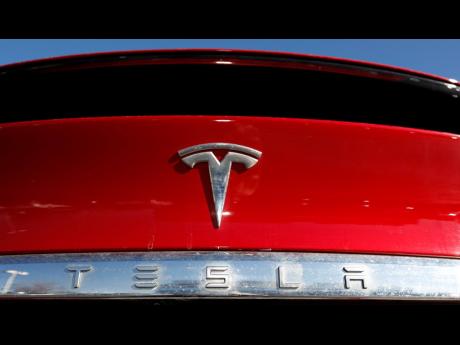 The Associated Press
The Tesla company logo sits on an unsold 2020 Model X at a Tesla dealership in Littleton, Colorado, in the United States in February 2020. On Wednesday, Tesla Inc posted record fourth-quarter and full-year earnings as its deliveries soared, despite a global shortage of computer chips that has slowed the entire auto industry. The Austin, Texas-based company made US$5.5 billion last year, compared with the previous record year of US$3.47 billion in net income posted in 2020. It was the electric vehicle and solar panel maker’s third straight profitable year. AFP

Tesla Inc on Wednesday posted record fourth-quarter and full-year earnings as deliveries of its electric vehicles soared, despite a global shortage of computer chips that has slowed the entire auto industry.

Although the company predicted it would be able to build 50 per cent more vehicles than it made last year, CEO Elon Musk said the chip shortage would stop the company from rolling out any new models in 2022. That means another delay for the Cybertruck pickup, which was originally scheduled to go on sale last year.

Musk also said Tesla is not yet working on a promised US$25,000 small electric car, but it will.

“We have enough on our plate right now, quite frankly,” he said.

And Musk said the company is looking at building additional factories, and will offer an update on locations later in the year.

The Austin, Texas company made US$5.5 billion last year, compared with the previous record year of US$3.47 billion in net income posted in 2020. Musk said the annual profit pushed the company's accumulated earnings since its 2003 inception into profitable territory.

Last year was a breakthrough year for the company, Musk said on a conference call with analysts.

“There should no longer be doubt about the viability and profitability of electric vehicles,” Tesla said in a letter to shareholders.

Musk said factory output was constrained last year as the company focused resources on modifying vehicles and manufacturing to deal with the chip shortage and other supply chain problems that will persist this year. A lot of engineering work and factory tooling are under way to produce the delayed Cybertruck, Semi and a new Roadster, which he said he now hopes to be ready for production next year.

If Tesla started building new vehicles this year, fewer vehicles would be delivered as attention and resources go to the new model, he said.

Tesla said it started building Model Y SUVs late last year at its new factory near Austin with more advanced battery cells. After final certification, it plans to start delivering them to customers. The company said it is testing equipment at its new factory in Germany, and is still trying to get a manufacturing permit from local authorities.

US safety regulators are looking into a complaint about the safety of Full Self-Driving. They are also investigating why Teslas, operating on a less sophisticated partially automated system called 'Autopilot', have repeatedly crashed into parked emergency vehicles.

In the fourth quarter, Tesla made US$2.32 billion. Excluding special items such as stock-based compensation, the company made US$2.54 per share. That beat Wall Street expectations of US$2.36 per share. Revenue for the quarter was US$17.72 billion, also ahead of analysts' estimates of US$17.13 billion, according to FactSet.