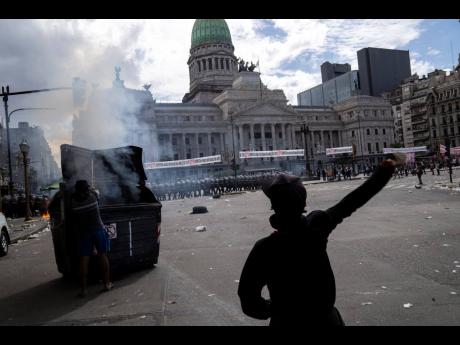 AP
A man throws stones at the police while protesting the Argentina government’s agreement with the International Monetary Fund to refinance some US$45 billion in debt.

Argentine lawmakers on Friday approved an agreement with the International Monetary Fund to refinance a US$45 billion debt, a vote meant to avoid economic turmoil but that divided the governing party.

The overwhelming vote of 202 to 37, with 13 abstentions, followed a marathon debate through the night while protesters angry over past IMF deals they saw as disastrous demonstrated and hurled rocks and set fires in front of the Congress building.

The measure now goes to the Argentine Senate and also must be approved by the IMF’s board.

Argentina assumed the debt in 2018 during the government of conservative President Mauricio Macri, but it failed to fully crush inflation or solve the country’s economic problems.

The current left-of-centre government said the refinancing agreement reached with the IMF last week was essential to avoid a default on the loans and even greater problems for an economy scarred by repeated past defaults and crises.

It would let Argentina delay repaying its debt until 2026, with payments continuing through 2034. Under the previous arrangement, the debt payments would be concentrated in 2022 and 2023.

“It is the best agreement that could be achieved,” said Carlos Heller, head of the Chamber of Deputies’ Budget and Finance Committee.

President Alberto Fernández secured support from the main opposition bloc in exchange for some modifications.

Leftist forces, including some members of the governing party close to Vice President Cristina Fernández, argued that some of the measures would worsen conditions for the 40 per cent of Argentina’s people who are poor.

Rocks thrown by protesters wound up smashing windows and damaging her office in Congress, where she presides. She issued a video calling the damage “paradoxical” because as president earlier, she had opposed deals with the IMF — as had her late husband, former President Nestor Kirchner.

Their son, Maximo, now a congressman, voted against the agreement — which he had earlier protested by resigning as head of the ruling movement’s delegation in congress.

The government maintains that a new deal would not require any overhaul of the pension system or labour rules though it says it would force increases in prices for gas, electricity, and other public services.