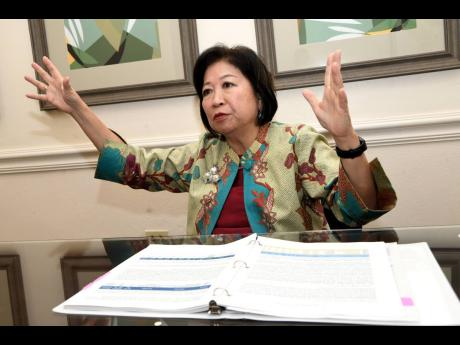 The World Bank Group has mapped out for Jamaica a strategy to increase employment, production, trade and economic growth that focuses on greater investments in the higher-end, valued-added categories of the outsourcing sector, as well as niche...

The World Bank Group has mapped out for Jamaica a strategy to increase employment, production, trade and economic growth that focuses on greater investments in the higher-end, valued-added categories of the outsourcing sector, as well as niche farming of certain fruits, vegetables and spices.

Apart from private-sector financing proposals, the strategy calls for a raft of regulatory changes.

The recommendations, while not accompanied by an implementation plan, are contained in a technical study termed ‘Jamaica’s country private sector diagnostic’ and titled ‘“Creating Markets in Jamaica: Repositioning for Private Sector-Led Growth’, which was launched in Kingston on May 6. It is produced by a team from the International Finance Corporation, IFC, the World Bank’s private-sector arm, with the high-level support of the Washington, DC-based multilateral institution.

“The experiences of selected exporters show that Jamaica could be a leading player in high-value niche exports. Global growth in demand for high-value horticulture products offers Jamaica an opportunity to increase its exports in this segment, which includes strawberries, pineapples, avocados, mangoes, citrus fruits, specialty vegetables, dry peppers, ginger, and turmeric,” the IFC document stated.

In both its niche horticulture and specialist BPO activities, referred to as knowledge process outsourcing, KPO, the country’s close proximity to large markets such as the USA is considered a comparative advantage, with the country and its geographical location being described in the executive summary as “a small island off the North American coast”.

A relatively short distance to North America notwithstanding, the study makes the point, however, that the potential exists for a widening of export markets, considering that more than two-thirds of Jamaica’s agriculture exports go to Canada, the United Kingdom, and the United States.

The multilateral institution said reforms are needed to boost the competitiveness of the horticulture sector, noting the myriad constraints facing it, such as adapting to climate change, access to land and financing, links to markets, research and development and extension services, logistics and post-harvest infrastructure for cold storage and warehousing. It is recommending stronger coordination both within the Jamaican government and between the public and private sectors to realise the potential in horticulture.

A detailed implementation plan and larger-scale production to boost competitiveness are among the other recommendations from the World Bank, for Jamaica to realise the potential in agriculture that it highlighted.

“Because of its size and firm scale, the country would face difficulties competing with regional and global powerhouses in agriculture products with high returns to scale. It will be imperative for Jamaica to nurture transformative investments – through domestic or international firms — that can produce goods at reasonable scale and of consistent quality,” the study noted.

Greater support for the use of e-commerce and digital platforms to connect producers, export brokers, and end markets buyers is being recommended to address the constraint of weak connections to markets and links between actors in agricultural value chains.

The IFC said strengthening market intelligence to help producers and exporters understand demand, including from tourism and regional markets, would help in addressing the problem.

There is scope, too, the World Bank affiliate said, for improving partnerships and alliances between producers and to increase their capacity to deliver products of reliable quality and quantity to buyers.

The diagnostic report is recommending public-private partnerships and public investment options for post-harvest infrastructure, including cold storage and warehousing that meets national and international safety and quality standards.

Investments in digital infrastructure to support food traceability systems is also being proposed. At the same time, banks and microfinance institutions are being encouraged to expand their agriculture lending portfolios to facilitate greater access to finance for agricultural producers.

The World Bank Group wants big regulatory and government policy changes to spur business process outsourcing, or BPO, expansion, saying that while Jamaica has established itself as a pre-eminent BPO services destination in the Caribbean, it needs to develop higher-value services in order to stay competitive.

The country’s proximity to North American markets, sizeable English-speaking workforce, and cost competitiveness, it said, have been favourable to the the development of BPO services so far.

“Though the sector is positioned to continue to grow over the short term, it faces significant risks from increasing automation and competition, including from other countries.” the IFC study noted.

“ Jamaica can increase its market share in KPO (knowledge process outsourcing) by specialising in higher-value services and positioning itself in global markets for digital services such as business research, content creation, and mobile and web development, it said.

It cautioned, however, that achieving these gains requires capitalising on advantages such as language skills, similar time zone and proximity to North American markets, as well as ensuring the availability of a large pool of trainable tertiary-educated workers and reforms in digital infrastructure.

“This will require change: refreshing laws and regulations, investing in digital skills, and addressing deficiencies in digital infrastructure,” the study noted.

Among its proposals, the World Bank Group is recommending the review and reform of the Telecommunications Act to align with current market trends and technologies, and a regulatory framework that promotes competition and investment in broadband markets.

Measures surrounding infrastructure sharing, simpler right-of-way authorisations and permits procedures, and enabling non-discriminatory access to upstream networks for international connectivity have also been placed on the table for consideration and action.

The IFC report is also calling for a greater level of work-from-home or remote-work arrangements in the BPO sector, as well as changes to the Special Economic Zones Act, to ease what it describes as onerous regulatory requirements and gaps.

“The SEZ authority should consider adopting a multi-use, cluster approach towards the development (or approval) of SEZs and technology parks; allow domestic businesses to operate in the zones without availing tax exemptions; (and) allow for flexibility in utilisation of non-processing area (dual usage) by developers for creating additional social infrastructure,” the IFC diagnostic report said.