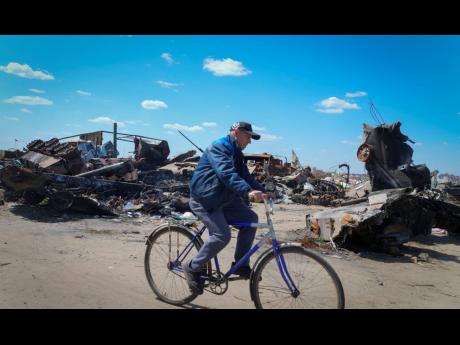 AP
A local resident rides a bike past a destroyed Russian military vehicle in Bucha, on the outskirts of Kyiv, Ukraine, Tuesday, May 10, 2022.

Ukraine stopped the flow of Russian natural gas through one of the hubs that feed Western European homes and industry on Wednesday, sending a fresh wave of energy jitters through Europe.

The price of gas jumped – then fell.

Ukraine’s natural gas pipeline operator said it would stop Russian shipments through a hub in a part of eastern Ukraine controlled by Moscow-backed separatists because of interference from enemy forces, including the apparent siphoning off of gas.

The hub handles about one-third of Russian gas passing through Ukraine to Western Europe. But the immediate effect of the cut-off is likely to be limited since much of the gas can be directed through another pipeline, gas analyst Zongqiang Luo at Rystad Energy said.

Preliminary flow data suggested that was already happening, though Russia’s state-owned giant Gazprom indicated the amount of gas flowing to Europe through Ukraine was down 25 per cent from the day before.

European gas futures see-sawed on the news, signalling that consumers may face higher energy bills at a time of already rising prices.

Spot gas prices rose four per cent at the opening of trading Wednesday, to €103 per megawatt. But they later eased to around €95 per megawatt hour, below where they were Tuesday.

The cut-off highlights the broader risk to gas supplies in the war and holds symbolic significance as the first time Ukraine has disrupted the flow westward.

“Yesterday’s decision is a small preview of what might happen if gas installations are hit by live fire and face the risk of extended downtimes,” Luo said.

He added that the interruption would also make it harder for European countries to refill underground storage for next winter and would “hasten Europe’s plans to move away from imports of Russian gas”.

The European Union has sought to reduce its dependence on Russian energy, phasing out its use of coal and considering doing the same for oil. Gas presents a more complicated problem, given both how much Europe uses and the technical difficulties in finding suppliers elsewhere.

It was not clear if Russia would take any immediate hit, since it has long-term contracts and other ways of transporting gas.

The cut-off is in sharp focus because it’s the first time that the war has disrupted the Russian natural gas that flows through Ukraine to get to Europe, where it powers factories and generates electricity.

The operator of the gas pipeline system, Gas TSO of Ukraine, said it could no longer transport gas through a compressor station in the Luhansk region in eastern Ukraine, near the border with Russia. It said it had no operational control over the station in Russian-held territory, with occupying forces interfering in the station’s operation and diverting gas in a way that endangered the stability of the pipeline system.

The company said it repeatedly told Russian state-owned gas exporter Gazprom about threats to flows from such interference but that its appeals were ignored.

The pipeline handles around a third of Russian gas heading to Europe. The Ukrainian operator said the gas flows could be made up through another pipeline that crosses from Russia into Ukraine near the town of Sudzha.

Gazprom said that was not possible, but gas flows at Sudzha rose overnight, by about eight million cubic metres per day.

European governments aren’t happy about sending hundreds of millions of dollars a day to Russia for energy but haven’t been able to agree on a natural gas boycott because of heavy dependence of major economies like Germany and Italy. The European Union’s executive commission has proposed a phaseout of Russian oil but has run up against resistance from reliant countries like Hungary.

Economists estimate that a total cut-off of both oil and natural gas would throw Europe into a recession. A loss of gas alone would hit industries such as metals, fertiliser, glass and ceramics that have in some cases already throttled back production due to high gas prices. And consumers would face even higher electric and heating bills than they already do.

To avoid those outcomes, the EU has proposed cutting Russian gas imports by two-thirds by the end of the year through additional supplies of pipeline gas from Norway and Azerbaijan, more purchases of liquefied gas that comes by ship, faster roll-out of wind and solar, and conservation. Whether that can be achieved remains to be seen.