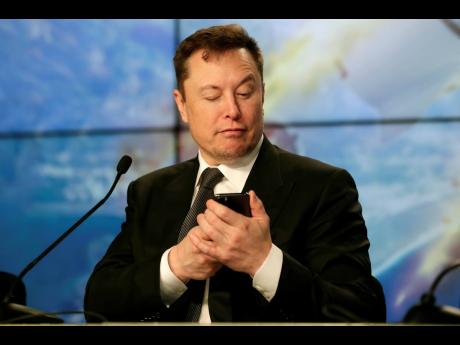 AP
Elon Musk, founder, CEO and chief engineer/designer of SpaceX, pretends to search for an answer to a question on a cell phone during a news conference after a Falcon 9 SpaceX rocket test flight at the Kennedy Space Center in Cape Canaveral, Florida, on January 19, 2020. 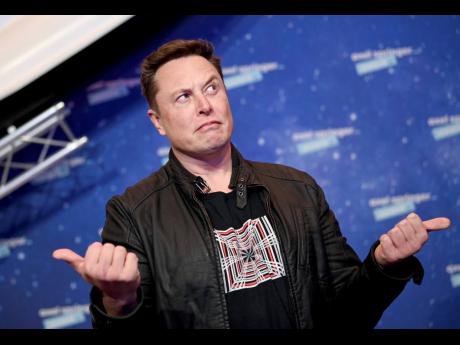 The Associated Press
AP SpaceX owner and Tesla CEO Elon Musk arrives on the red carpet for the Axel Springer media award in Berlin, Germany, on Tuesday, December 1, 2020. Many people are puzzled about what a Elon Musk takeover of Twitter would mean for the company, and even whether he’ll go through with the deal.  If the 50-year-old Musk’s gambit has made anything clear, it’s that he thrives on contradiction. 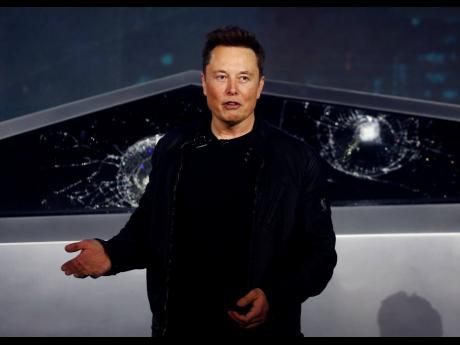 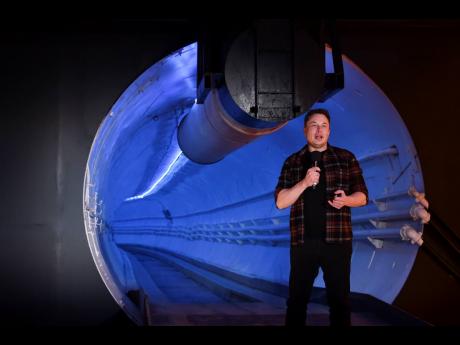 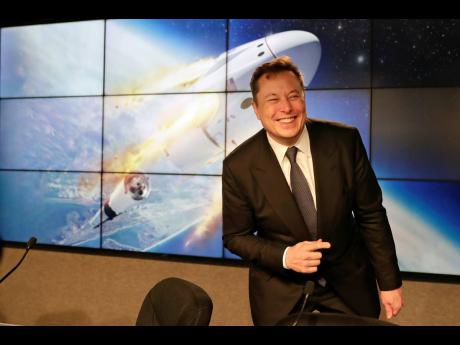 As the uproar over Elon Musk’s US$44-billion buyout of Twitter reached a crescendo, another Musk drama was back in court.

That 2018 spectacle started, ironically enough, with a Musk tweet about doing an audacious deal. Weeks later, the Tesla CEO abandoned talk of buying all the electric carmaker’s stock, admitting it might be too much trouble. With regulators preparing to sue the billionaire for defrauding investors, he pondered his position in a live-streamed interview while puffing on pot.

It was a confounding study in Musk’s persistent ambition and his delight in contradiction. Yet as the world’s richest man pursues Twitter, even those who’ve long watched him remain flummoxed about what he has up his sleeve.

“This is a guy who’s more transparent than 99.99 per cent of other CEOs, and yet he’s harder to predict because he has the confidence to be able to publicly change his mind,” said Erik Gordon, a University of Michigan business professor.

“Would Musk be more successful if he toned it down? I think the answer is no, because he wouldn’t be Musk.”

This week, Musk is again keeping people guessing. First, he embraced a European measure to keep hate speech and misinformation off social media. Less than 24 hours later, he announced that he’d reverse Twitter’s ban of former President Donald Trump, who was kicked off the platform for inciting violence.

Meanwhile, weeks after Twitter’s board accepted Musk’s offer, doubt remains about whether he will even go through with the deal. He could still walk away by paying Twitter a US$1-billion termination fee, a huge figure, yet a fraction of his total fortune.

But if the 50-year-old Musk’s gambit has made anything clear, it’s that he thrives on contradiction.

Musk, who’s worth about US$240 billion, boasts of acquiring Twitter to defend freedom of speech. But he has long used the platform to attack perceived foes.

He is supremely confident in his own judgement. But he has openly acknowledged vulnerabilities, disclosing angst over a break-up in one interview, and telling a Saturday Night Live audience last year that he was the first host with Asperger’s syndrome.

He’s a widely admired visionary. But he trashes the conventions of corporate behaviour, alienating analysts, regulators and others.

Musk has been something of an outlier since childhood, teaching himself computer programming at 10 and selling a video game he created two years later, according to a 2015 biography.

He left South Africa at 16 for Canada, before moving to the United States. At 24, he dropped out of Stanford to try his luck in the 1990s dot-com boom.

Together with brother Kimbal, he launched Zip2, an online business directory that was eventually sold to Compaq for US$307 million.

Musk used his share to found what would become PayPal, sold to eBay in 2002 for US$1.5 billion.

Musk then founded SpaceX to develop cost-effective reusable rockets, before investing in a start-up called Tesla. But he soon clashed with co-founder Martin Eberhard.

“Every time there was an article that didn’t feature him, he blew a gasket,” Eberhard, who sued Musk and Tesla after he was ousted, said during a 2018 interview with the AP.

Managers “will be asked to do things that they don’t necessarily think are reasonable,” Berdichevsky said. “Some of them will not be reasonable, and others will completely transform things.”

Musk’s creative energy, though, is intertwined with his erratic behaviour.

That was spotlighted in 2018, as Tesla ramped up production of its Model 3 sedan. Musk berated engineers for problems before acknowledging that his over-reliance on automation was a primary cause. Meanwhile, he scolded analysts for asking “bonehead questions”.

That August he stunned observers, tweeting that he was considering taking Tesla private and had secured financing. The stock soared before he backtracked. The Securities and Exchange Commission sued, alleging Musk’s talk of a deal was largely fiction.

Musk and Tesla settled, paying fines of US$20 million each and agreeing that tweets potentially affecting the stock price be reviewed by a lawyer. A federal judge recently rejected Musk’s contention that the settlement violates his right to free speech.

“Some people use their hair to express themselves,” he’s said. “I use Twitter.”

Musk and his fans, though, sometimes use the platform to go after perceived adversaries.

A California short seller has alleged that the CEO and one of his acolytes, Omar Qazi, were responsible for tweets insulting him and falsely asserting he had been arrested for child abduction. They were among 80,000 coordinated tweets “praising Tesla and attacking its critics,” according to investor Aaron Greenspan’s lawsuit.

Qazi called the allegations “absurd,” in an email. Tesla lawyers have dismissed charges of a Musk-led Twitter mob as conspiracy theories.

Musk did not respond to an interview request for this story. But speaking briefly with AP at New York’s Met Gala, he reiterated his pledge to rid Twitter of spam bots and trolls spreading junk messages.

“That’s obviously diminishing the user experience,” he said. “I’m on the warpath, so if somebody is operating a bot and troll on me, then I’m definitely their enemy.”

But a University of Maryland researcher recently concluded that such bots have generated thousands of positive tweets about Tesla, potentially buoying its stock.

Neither the company nor its supporters has taken responsibility. But Musk has said that for real people on Twitter, most anything is fair game.

Twitter’s reliance on advertising has been the impetus for its efforts to cap extremism and misinformation, said Angelo Carusone of watchdog Media Matters.

If Musk loosens those standards, he risks running afoul of Apple and Google. Both have stringent policies they’ve cited in booting some apps from their devices.

Musk hasn’t addressed what he’d do if his efforts to open Twitter jeopardise its accessibility.

Then again, he’s has never been one to shy away from contradiction.