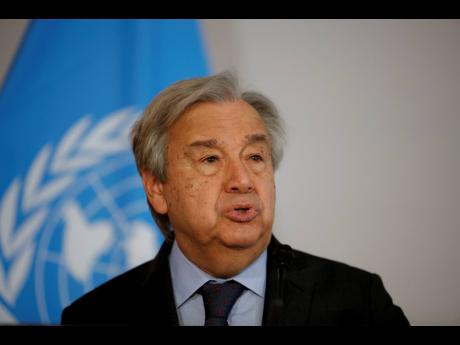 The United Nations on Wednesday significantly lowered its forecast for global economic growth this year from four per cent to 3.1 per cent, saying the war in Ukraine has triggered increasing global food and commodity prices and exacerbated inflationary pressures, upending the fragile recovery from the COVID-19 pandemic.

The mid-2022 forecast from the UN Department of Economic and Social Affairs said the downgrade in growth prospects is broad-based, including the world’s largest economies – the United States, China, and, most significantly, the European Union – and the majority of other developed and developing countries.

The World Economic Situation and Prospects report also warned that the current forecast of 3.1 per cent “faces significant downside risks from further intensification of the war in Ukraine and potential new waves of the pandemic”.

“This slowdown and the war in Ukraine – triggering sharp increases in food and fertiliser prices – will hit the developing countries particularly hard, exacerbating food insecurity and increasing poverty,” the report said.

According to the UN forecast, global inflation is projected to increase to 6.7 per cent in 2022, twice the average of 2.9 per cent during 2010-2020, with sharp rises in food and energy prices.

UN Secretary General Antonio Guterres said: “The war in Ukraine – in all its dimensions – is setting in motion a crisis that is also devastating global energy markets, disrupting financial systems, and exacerbating extreme vulnerabilities for the developing world.”

He urged “quick and decisive action” to ensure a steady flow of food and energy supplies to open markets, saying this requires the lifting of export restrictions, releasing surpluses and reserves to countries in need, and addressing the increase in food prices “to calm market volatility”.

The 26-page report said the war in Ukraine is not only exacting heavy tolls on its economy and Russia’s, but is also affecting the economies of neighbours in Central Asia and Europe.

The economy of the European Union –which in 2020 imported 57.5 per cent of its energy consumption and is most directly hit by disruptions in energy supplies from Russia – is now expected to grow by only 2.7 per cent this year, down from the January forecast of 3.9 per cent, the report said.

The US economy is expected to grow by 2.6 per cent in 2022 and 1.8 per cent in 2023, a significant downward revision from the January forecast, the report said, pointing to stubbornly high inflation, aggressive monetary tightening by the US Federal Reserve, and the direct spillover of the war in Ukraine.

In China, the UN said, the economy is projected to grow by 4.5 per cent this year, down from 8.1 per cent in 2021. It cited rolling lockdowns in major cities to contain the Omicron wave of the COVID-19 pandemic in the first quarter of the year.

As a group, the UN said the economies of developing countries are forecast to grow by 4.1 per cent this year, down from 6.7 per cent in 2021.