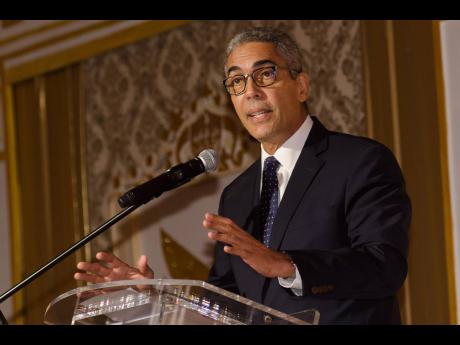 The Bank of Jamaica, BOJ, is not buying into talk internationally that the aggressive raising of policy interest rates by central banks as an inflation fighting tool is leading to a slowing of growth and potential recession, either in the local or global economy.

A recession is generally regarded as two consecutive quarters of economic contraction, as measured by the declining performance of a country’s gross domestic product.

At the same time, the central bank is saying it’s pleasantly surprised at at the remarkable ability of local financial institutions to keep a lid on bad debts, considering the major economic dislocations caused to businesses and individuals by the COVID-19 pandemic.

“Not necessarily in our case. The capacity that we have left to continue to drive growth is significant,” BOJ Governor Richard Byles said in response to a Financial Gleaner question on the issue of the bank’s take on the inevitability of a recession, during Tuesday’s quarterly monetary policy press conference.

“For example in the tourism business, my understanding is that the capacity that tourism is at now is approximately 70 per cent of what the pre-pandemic capacity was. So, we have some way to go in that external sector of the economy,” Byles added.

The central bank is calculating that with operations at the Jamalco alumina plant in Clarendon expected to be back on stream by June this year, there should be sufficient positive impact on growth in the Jamaican economy for the remainder of the current fiscal year.

“The tightening that we are doing should not restrain achievement of the targeted growth of seven to 10 per cent up to March of this year, nor the two to four per cent for the year 2022-2023. So, I don’t see a lot of danger in that,” the BOJ head said.

He conceded that the current economic climate in which there is a constant watch for possible signs of recession was a “delicate path to walk” and a matter that is given consideration by the central bank’s monetary policy committee, MPC, that last week announced another rate hike that took effect on May 19.

The BOJ tacked on another 50 basis points to the policy interest rate, taking it from 4.5 per cent to 5.0 per cent.

It was the sixth rate increase by the monetary authority since the end of September last year, when it abandoned its record low policy rate of 0.5 per cent, in an effort to corral inflation within the 4-6 per cent target range.

As of April, however, inflation had risen further to 1.8 per cent, doubling the top end of the target range that BOJ is mandated to defend.

The most recent rate hikes by the central bank have been heavily criticised by the business community, the latest salvo coming from the Jamaica Manufacturers and Exporters Association, which has slammed last week’s rate increases as a business killer.

The BOJ governor noted that labour statistics and the GDP out-turn for December 2021 show no signs of a looming recession.

“We feel pretty confident that we are not yet putting the economy at risk to the extent of putting it into a recession,” Byles declared.

CRAFTED WITH RISKS IN MIND

“We know that there are risks in the international economy. We know that there is slowdown in China because of the COVID lockdown, and that is affecting or exacerbating supply chain conditions there. We know that the high inflation could affect consumption globally. So, there are indeed headwinds, but these are the things that we try to balance when the MPC comes to a decision on policy rates,” Robinson said.

“Whilst there are concerns about slowdown, we don’t see a recession as a major risk at this point in time,” he added. “What all central banks are trying to do now is trying to engineer this sort of soft landing.”

The central bank also sees no problems on the horizon for loan quality being negatively affected as a result of the policy rate adjustments which, it noted, have already found their way into higher bank loan rates.

“The banks have been very careful in how they have translated the increase in our policy rate to increases in loan rates for their clients. They are very sensitive that we are coming out of a pandemic period and some businesses are not as strong as they were pre-pandemic,” the BOJ governor said.

He described current non-performing loans, NPLs, as being “quite good and well within the range of what we would consider to be comfortable”.

“NPLs are around three per cent, much ahead of what we thought it would be given the pandemic,” added Maurene Simms, deputy governor in charge of financial institutions supervision.

“One of the things that pleasantly surprised us is how well-capitalised” the banks are and the buffers they had “to cushion any fallout from the economy in terms of their loan book,” she said.