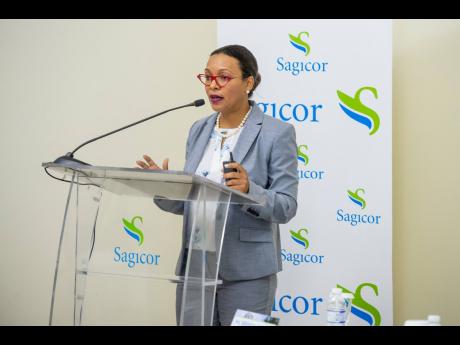 Sagicor Real Estates X Fund Limited, which holds real estate assets in tourism and warehousing, plans to buy commercial real estate with the US$58 million it received from the sale of Playa shares.

Its targeting real estate in Jamaica and the region.

“The strong inflow of liquidity from the sale of the Playa shares will be redeployed into real estate opportunities. We remain bullish on real estate opportunities in Jamaica and the wider region,” said Brenda-Lee Martin, CEO of Sagicor X Fund, at the company’s annual general meeting held on Thursday. “We are looking to reduce our earnings volatility by investing in properties already up, so that we can get predictable cash flows and returns.”

Chairman Christopher Zacca added: “There are two commercial opportunities that we are looking at right now.”

Zacca, who is President & CEO of Sagicor Group Jamaica, will demit office as chairman of X Fund on July 28, the company said Thursday.

The Playa shares were sold by Sagicor Group more than a year ago, in January 2021, at a time when there was “adverse impact” on the tourism and travel market, Martin noted.

The net proceeds totalled US$96 million, of which X Fund received some US$58 million. The company invested the funds in interest-bearing securities in lieu of opportunities to purchase other real estate. A portion of the funds also reduced the group’s debt load.

The real estate company said the financial year started on a “tempered” note with the emergence of a new variant of COVID-19 and the war launched by Russia against Ukraine in late February.

Additionally, the company is concerned about rising inflation, particularly its effect on the purchasing power of potential travellers.

Of Sagicor X Fund’s total revenue for this quarter, $1.7 billion came from the hotel segment, a recovery from $721 million at March 2021.

In the March 2020 period, hotel revenue amounted to $1.35 billion, amid total revenue of $1.3 billion. The anomaly in which a segment of the business recorded more revenue than the total operation related to negative revenue of $221 million on financial assets booked by the company.

“We expect continued strong performance, especially in the real estate market in Jamaica, and we are seeing strong recovery in the DoubleTree property [in Florida],” she said, adding that group tours, which deliver higher margins for the hotel, are returning.

The sale of Playa shares resulted in the restructuring of the company. Its holdings now include direct hotel assets, led by DoubleTree, and indirect commercial assets via Jamziv Mobay Jamaica portfolio, and units in the Sigma Real Estate Portfolio. The indirect holdings recorded a loss of $6.2 million, in partial recovery from a deeper loss of $24.6 million a year earlier.

Sagicor X Fund directly holds 51.86 per cent of Jamziv Mobay, while its other subsidiary X Fund Properties holds 8.95 per cent, for a combined 60.81 per cent interest.

“Restructuring of our indirect commercial operations in the prior year, through the sale of Playa shares, generated liquidity that was used to retire debt facilities and purchase investment securities assigned to other operations,” the company said.

“This strategic move yielded a positive outcome, as the group benefited from reduced interest cost and higher interest income.” stated notes in the financials.