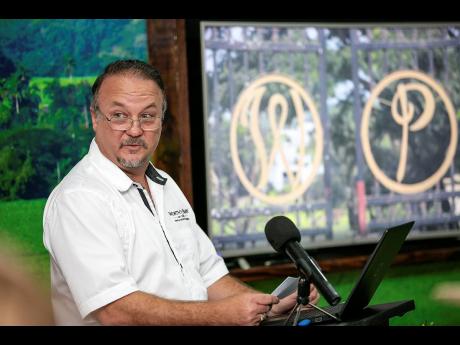 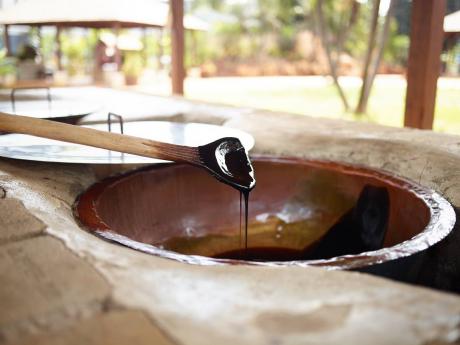 A vat of molasses on display for visitors at the Appleton Estate in St Elizabeth. 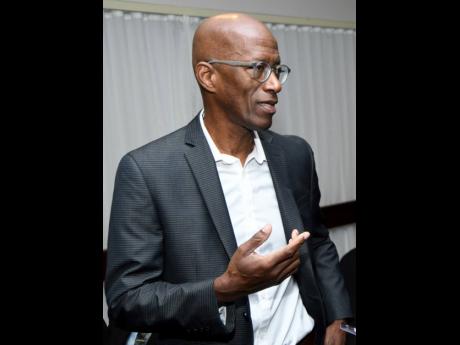 Jamaica will import more molasses this year to meet rising demand from rum companies. The sector projects it will need five times more of the cane by-product than Jamaica’s sugar factories can churn out. The local supply of molasses has been...

Jamaica will import more molasses this year to meet rising demand from rum companies. The sector projects it will need five times more of the cane by-product than Jamaica’s sugar factories can churn out.

The local supply of molasses has been falling with the shrinkage in the number of sugar producers over time, leaving only two molasses suppliers.

“The two are Worthy Park and Frome from hundreds in the past,” said Chairman of the Spirits Pool Association, Clement ‘Jimmy’ Lawrence, a reference to the centuries-old sugar sector.

For 2022, the Spirits Pool expects to import 120,000 metric tonnes of molasses, to complement the 24,000 tonnes the sugar estates are projected to produce.

“The fact is, the local rum industry is growing and the local sugar industry production has reduced,” said Gordon Clarke, managing director of Worthy Park Estate Limited, a sugar and rum producer.

As such, there is always a shortfall between local production and the rum industry’s needs, he said.

“This has been the case for over 20 years,” Clarke told the Financial Gleaner.

The Spirits Pool imports molasses on behalf of its members, which include distilleries and rum brands. Over five years, the Spirits Pool has imported US$7.6 million of molasses annually, on average, according to United Nations data on Jamaica.

“We are sourcing molasses to meet the local demand,” said Lawrence. “What is at stake is the efforts to secure the quantities and the price to get it here. But molasses imports are generally increasing,” he said.

Not only is the product in demand by multiple sectors, forcing Jamaica to compete for imports against the producers of ethanol, animal feed and fertiliser, the rum industry is facing the same challenges as other businesses in relation to supply chain bottlenecks and delayed shipments.

“There is no single issue that’s causing the challenges. But overall, they have an impact on pricing and supply,” said Lawrence, the former chairman of Jamaica’s largest and dominant rum-making operation, J. Wray & Nephew Limited.

These challenges will factor into the end price of rum, he added.

“If the inputs are subject to increase prices, then that’s a natural consequence,” he said, adding that the respective distilleries and marketing companies will make their own determination.

The taste profile of Jamaica’s rum isn’t affected by the imports, Lawrence asserted.

“We have the best rums in the world,” he said.

The rum industry is made up of private companies, whose earnings are not publicly disclosed. But JWN’s performance is regularly reported on by Italian parent company Campari Group in its market filings overseas. For the period January to March, sales in Jamaica for brands owned and distributed by Wray & Nephew totalled €30.9 million, or around $5 billion in local currency. That’s up 22 per cent from €25.2 million in the same period in 2021.

In November 2016, rum produced in Jamaica received ‘geographical indication’, or GI, status. The GI acts as a form of protection for the industry from unauthorised reproduction across the globe. The product must be manufactured within a geographic space or country, using local primary inputs and a process of production that’s standardised.

“Importing molasses does not negate the GI,” said Lawrence. “It’s a powerful mix of science and art to the making of rum. The key ingredient is not so much determined by the molasses, but more to do with the water, yeast, and the proprietary methods we use, and have used,” Lawrence said.

“Jamaican has its own distinct rum. So even though we use some imported molasses, it still has a unique profile from an olfactory and taste perspective,” he said.

Last year, Jamaica imported US$7.7 million worth of molasses, down from US$18 million in 2020, which, incidentally, was the highest importation over five years, according to data from the United Nations. The lowest importation value was US$1.7 million, in 2018.

The largest imports in 2021 were sourced from Mexico, followed by Panama, El Salvador and Dominican Republic, among other places.