Meeting on today as NEPA mulls permit for $11b Dream resort 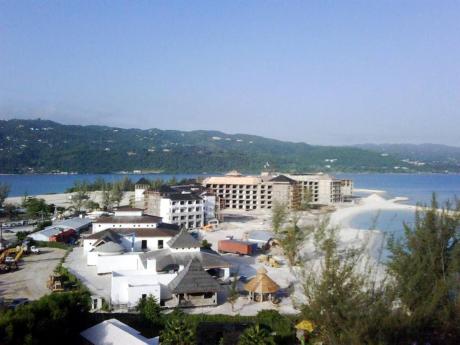 File
A section of Montego Freeport as seen in 2009.

The Jamaican government appears to be banking on another hotel development in the Montego Freeport area of the resort city to aid the touted post-pandemic tourism bounce-back. But as opposition grows to the plans by Seawind Key Investment Limited,...

The Jamaican government appears to be banking on another hotel development in the Montego Freeport area of the resort city to aid the touted post-pandemic tourism bounce-back.

But as opposition grows to the plans by Seawind Key Investment Limited, SWKIL, for the addition of another 280-room hotel to the 700 already in operation at Secrets St James and Secrets Wild Orchid, and the 150-suite Breathless Resorts already nestled on the narrow Freeport peninsula, the National Environment & Planning Agency, NEPA, has summoned the developers and residents to a meeting today, Wednesday, in a bid to iron out the tensions.

SWKIL is looking to invest US$70 million, or almost $11 billion, in the new hotel.

The Freeport peninsula is home to various hospitality businesses, but a number of Montego Bay’s wealthy citizens also reside there.

NEPA has remained tight-lipped on the matter and its CEO Peter Knight did not respond to a Financial Gleaner request for comment on Tuesday. However, residents of the area confirmed that a meeting has been called by the planning agency for 2 p.m. today in a bid to work through the objections raised by Freeport residents.

While several residential and commercial landowners in the area were previously asked to indicate whether they would submit ‘no objection’ letters over the development, today’s meeting is understood to be open only to residents of the several gated communities in the immediate area.

The objectors include residents of the latest development in the area, the posh 55-unit Soleil Residences, an imposing 10-storey condominium complex where units have sold for close to US$1 million or almost $156 million. The Soleil sits on three acres of land and was developed by Sharkfin Development Limited, a company whose sole shareholder is listed as Brian Jardim, a well-known Montego Bay businessman and son of the late hotel mogul, Gordon ‘Butch’ Stewart.

“We are not in support of the development as it is currently proposed. We believe that it will have a serious negative impact on our community for a number of reasons and we have written to Mr Peter Knight at NEPA to outline our concerns,” Alesha Peart, a member of the Soleil development team, homeowner in the complex and chairperson of the management committee, told the Financial Gleaner on Tuesday.

Peart made the point that as someone connected to a development company, she is not opposed to development, per se, but fears that persons who live in the area will be permanently disadvantaged by developers who are primarily interested in profit-making and don’t live in the area.

“We are developers also,” said Daswani “When it come to Dreams, I don’t think anybody is opposed to the development.”

However, development without solutions to address the concerns of the residents is disturbing, he said in an interview with the Financial Gleaner from Miami, Florida, on Tuesday. Daswani does not reside at Montego Freeport but is looking to sell property to people who will.

He adds that any promise of continued beach and beach club access for residents by the resort’s owners should be tied to their building approval; and raised concerns about noise pollution, adequate parking, the deteriorating road surface, drainage and run-off of construction materials, which he said were all nuisances endured by residents over time.

One landowner, Dr Guna Muppuri, has already submitted a conditional no-objection letter to NEPA. He said an environmental impact study for the site on which the hotel would be built was done at the time the other hotels were being built some 13 years ago.

“At the outset, we hereby express our conditional no objection for the proposed construction in our vicinity and we gladly welcome an investment of such a magnitude that is bound to promote economic growth and job creation,” said Muppuri in a May 15, 2022 letter to Knight which was seen by the Financial Gleaner.

Muppuri is an entrepreneur and chairman of real estate development company Winfra Development Consortium, which owns land directly across from the proposed hotel site.

“We clearly understand that Freeport is not an exclusive zone for residential gated communities and we do know that it is specifically zoned for resorts and residential development. We are also cognisant of the fact that Freeport has set a precedent, and as such is no longer new to high-rise developments (10 floors and upwards). The proposed hotel, once approvals are granted, will be the sixth of the high-rise developments and a formidable sized investment opportunity that our nation cannot afford to forgo,” said Muppuri, the principal owner of listed pharmaceutical company Indies Pharma Jamaica.

Muppuri is also spearheading the development of the $3 billion Bioprist Institute of Medical Sciences at Ironshore on outskirts of Montego Bay as part of a medical city development slated to cost some $48 billion.

He insisted in his letter to NEPA, however, that SWKIL should make no changes to the public beach access and other amenities enjoyed by residents of the area; that the beach club and related amenities should be restored as promised in a public hearing held on April 26, 2022; and that the relevant government agencies must commit to upgrading water supplies, sewerage system, telecommunications and electricity infrastructure alongside the proposed resort development.

“I am very serious about welcoming investments into our country without compromising our civic rights and right to live in peace. It is also our duty not to be unfair and we should refrain from scaring off investments coming into our country, and that includes investments in a resort zone, because of our concerns,” Muppuri told the Financial Gleaner in written comments on Tuesday.

The proposed Dream resort is planned for land that formerly housed a Hard Rock café, which was shuttered during the pandemic.

Secrets, Breathless and Dreams resorts are brands managed by AMResorts.