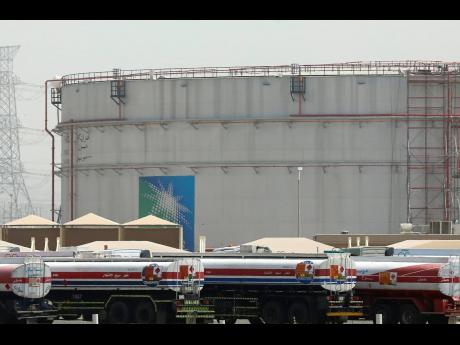 AP
Fuel trucks line up in front of storage tanks at the North Jiddah bulk plant, an Aramco oil facility, in Jiddah, Saudi Arabia, on March 21, 2021.

The OPEC oil cartel and allied producing countries, including Russia, will raise production by 648,000 barrels per day in July and August, offering modest relief for a global economy suffering from soaring energy prices.

Gasolene prices have risen in tandem and hit another all-time high in the United States on Thursday.

That’s become a potential problem for US President Joe Biden in mid-term Congressional elections this fall.

Elevated prices are also a threat to the global economy as it emerges from the pandemic, with both companies and families potentially reducing activity to deflect those costs.

In Germany, the government has sought to soften the blow to consumer finances from energy inflation by launching deeply discounted transit passes that enable unlimited use of local trains, subways and buses for €9 (US$10) per month.

The Organisation of Petroleum Exporting Countries, whose de facto leader is Saudi Arabia, had for months resisted pressure from the United States to increase oil supply more quickly. That stance, along with a European Union agreement to end most oil imports from Russia, has pushed prices higher. Gasolene and diesel prices have also been rising due to a lack of refining capacity to turn crude into motor fuel.

The US “welcomes” the increased production, White House press secretary Karine Jean-Pierre said in a prepared statement. “The United States will continue to use all tools at our disposal to address energy prices pressures.”

The decision Thursday steps up the pace by the alliance, known as OPEC+, in restoring cuts made during the worst of the pandemic recession. The group had been adding a steady 432,000 barrels per day each month to gradually restore production cuts from 2020.

The increase did not appear to ease concerns about tight supply and oil prices actually rose after the decision was announced Thursday.

US crude, which had fallen by as much as US$3 per barrel early in the day, reversing course and traded up almost two per cent at US$117.15. International benchmark Brent rose 0.7 per cent at US$117.02. Market traders may have expected more from the meeting, such as an indication from Saudis that they could make up for any shortfall due to sanctions against Russia.

Instead the alliance’s statement merely mentioned reopening from COVID-19 lockdowns in “major global economic centres” and the end of seasonal maintenance work at refineries as justifications for the incremental increase. Lockdowns in Shanghai and Beijing have sapped fuel demand in China.

OPEC+ decisions have been complicated by the group’s failure to meet its production targets due to underinvestment and other roadblocks in some member countries. Actual production has lagged the scheduled increases.