Cuba sugar harvest only half of expected output, sector in ‘crisis’ 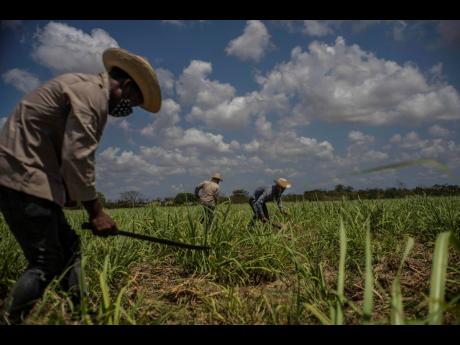 AP
Farmers use machetes to weed a sugar cane field in Madruga, Cuba, on April 29, 2021.

Cuba, once legendary for its sugar cane, produced only about half the sugar it had hoped to this season, and authorities acknowledged that while they will cover internal demand they will not be able to meet their international commitments.

“It’s not a secret, the sector is in crisis,” Dionis Pérez, director of communication at Azcuba, the government agency that regulates sugar production on the island, told reporters. ““This year we have fulfilled 53 per cent of the harvest.”

Pérez did not say how much sugar had been harvested, but at the end of last year Economy Minister Alejandro Gil said the state plan was to produce 911,000 tons this sugar harvest, which concluded in May. The percentage given by Pérez would mean that production was about 482,000 tons.

Pérez said the reasons for this season’s low production include a shortage of herbicides and fertilisers, a delay in starting up sugar mills, and even a lack of oxygen – which was hoarded by the health sector to combat COVID-19 – needed to repair breakages. He also blamed a lack of fuel and spare tires due to United States sanctions.

He said it was not realistic to compare current sugar production to that of the 1980s. “I had 150 (sugar) mills then, now I have 56. Fifty-four of those were active, and of those 54 only 35 contributed to the harvest.”

In 2002, authorities closed half of the island’s 150 mills, and in the subsequent years others were dismantled amid falling sugar prices. Many of the old facilities dated from before the Cuban revolution in the 1950s. Sugar cane fields were reduced and thousands of people lost their jobs.

Pérez said higher production is not expected next year since the same problems will exist and authorities plan to reduce the number of sugar mills used to 26. Authorities will hold a sugar and cane derivatives conference in the coming week.

Pérez said this season’s production will cover internal demand of about 500,000 tons but not the 400,000 tons per year contracted with China.

“We will have to renegotiate,” he said.